The first indication of a problem was that I could play a few songs, but at some point I would select another song it wouldn’t play. I had to turn off my Oppo UDP-205 and turn it back on to regain control of playback.

This got progressively worse until I could only play one song and then I would have to cycle power on the Oppo to regain control.

I decided to reinstall Roon on my QNAP NAS to see if that would solve the problem. After reinstalling Roon I was able to switch between songs again, but the vocals sounded very distant on any song I played.

After playing about 10 songs I began losing control of playback again. This time I was not able to regain control of playback. Actually, it appears that playback is occurring when I look at Roon on my phone, but the Oppo UDP-205 is not producing output (and therefore seems to not be receiving input from the Core.

The main problem is that I can no longer play to my Oppo. The secondary problem is the distant sounding vocals that occurred prior to total loss of control. 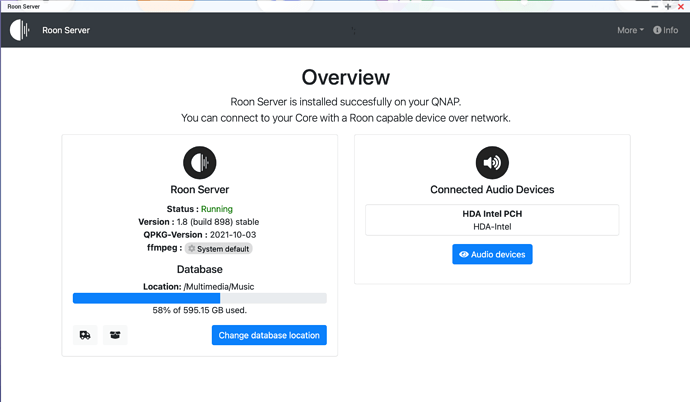 Mine is about 4 years old. I think I got one of the last ones built. It functions perfectly in every other way.

Followup question. Should my Oppo show up under “Connected Audio Devices” when it is powered up and on the network?

The OPPO should show up under connected to Core for the USB and HDMI. It also appears under Roon Ready with the LAN connection.

It does on NUC/ROCK anyway.

That looks to be a managed switch. Roon advises to use un-managed switches. While I don’t see your model on the list, take a quick read of the network faq, and at the bottom with suggestions for specific router models, see if your model(s) have settings dealing with Multicast and IGMP and if they make a difference.

Yes, my Oppo shows up under Roon Ready in the roon app on my phone. However, it doesn’t show up under “Connected Audio Devices” in the Roon Server Overview screenshot when I open the server on my NAS. Should I see it in this window too?

That is probably for devices actually attached to the server.

Roon worked just fine with these switches for a couple of years.

Okay sorry, I assumed it was a new install with issues.

In that case, I would suggest loading Roon temporarily on a different PC (windows or mac) and see if it has the same issues. If it does not, then continue looking at the Qnap, if it still has the issues with the other PC, then it might be the Oppo’s network port, (or the cable or the network port on the switch).

Would you recommend disabling IGMP Snooping?

If your network has been stable and working for years then I would move on from investigating any network settings and begin exploring whether or not the issue is the Qnap or the Oppo.