Raspberry Pi 4b with Allo BOSS DAC connected to router via ethernet & to analogue amp via standard phono.

250,000 tracks, maybe? Not sure where to find the exact number but that’s what storage says.

So this is a new thing. I have repeatedly restarted everything & once Roon is back up & the spinning circle has finished scanning the drive, all is normal. Then, after I’ve added & tagged a few albums, the spinning blue circle starts up again & just will not go away. When I click on it, it says this:

I’ve literally just sat & done 4 hours work & it hasn’t moved. And this is has been happening repeatedly for several days, now.

Is this because of the latest update? Is it known thing with a known solution? Am I doing something stupid again? I’m really not sure how to troubleshoot it. Any suggestions would be welcome.

It’s doing it again already, after a restart following the previous post. Since it doesn’t seem to be affecting Roon’s performance at all, I shall leave it for the time being.

The second screen shot “looks” like it got a bit closer to the end?? It may help to give it a few more cores to work with if you have the analysis throttled (setting/library): 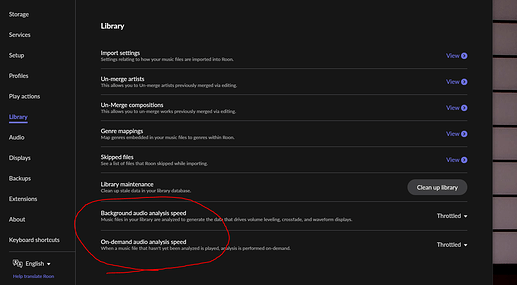 Might not hurt to use the clean up library function on that page too? Just to see if there are things to get rid of.

That said, here’s a new screen shot of that same scenario. I haven’t touched it since the last screen shot.

I’ll give the clean up a go. I already have all 8 cores committed to analysis.

So, cleaned everything out & did a restart & I’m here again:

On the basis that it has now stopped doing the endlessly spinning thing mentioned above (& at one point I left it all night & it still didn’t finish) I think it might be worth mentioning the difference between what I was doing then & what I’m doing now.

I had a few classical box sets that I downloaded & dropped into my Roon library (on the basis that they would need properly tagging at some point, but at least they’d be there for me to listen to in the mean time).

As I came to tag the first couple of these box sets, it turns out that they were all in APE file format & so hadn’t shown up in Roon as expected.

My workflow was to convert the files to FLAC, one CD at a time, & move the APE files out of the Roon library & into a secondary library I keep for “original downloads”. (This is just in case anything gets corrupted or doesn’t convert as expected & I need to go back to the source.)

In any case, creating a load of FLAC files within the Roon library from files that were themselves already in the Roon library (as opposed to dragging them in from outside) seemed to cause Roon a whole load of trouble & sent it into a bit of a spiral.

I’m currently tagging box sets that are already sitting in my Roon library and are in FLAC format & am having no such problems.

I’m not sure if any of this is likely to be related to the issue I was having, but there it is.

In any case, creating a load of FLAC files within the Roon library from files that were themselves already in the Roon library (as opposed to dragging them in from outside) seemed to cause Roon a whole load of trouble & sent it into a bit of a spiral.

Yes, that is generally not a good idea. I either do all the work outside of watched storage and only copy IN the final version. Or, I turn off RoonServer while I am messing with the actual files, so that it is not immediately attempting to analyze what is happening.

Noted. And thank you.