“Roon tested” Denon AVR shows up under Airplay only

From the partner index I understood that my Denon is a “Roon tested” device. However, on my setup page it only shows up under the Airplay category. Is this an indication that something is wrong? (The downside of how it is now, is the limited sample frequency support of the Airplay protocol.) 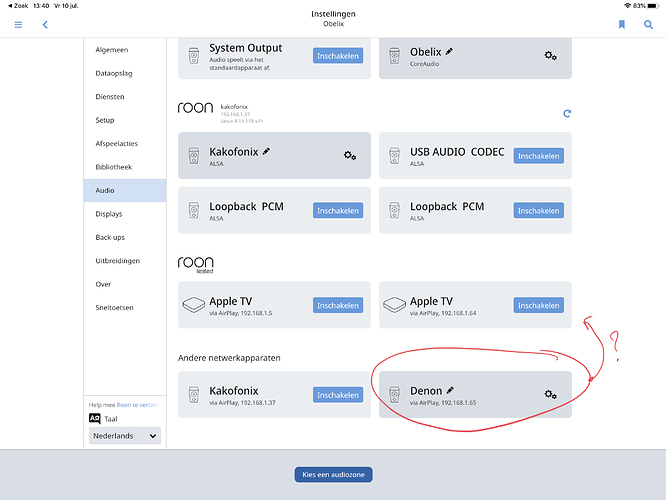 Nope - that is how it is designed to work. The Denon is “Roon Tested” - not to be confused with “Roon Ready”.

Ok. Thanks. Looks a bit strange though because the Apple TVs are under the Roon Tested heading.

Ah, I see what you mean. I’m seeing my Airplay devices listed under “Other Network Devices”, so I thought that would be the natural place. Perhaps the Denon & Marantz devices will get promoted in a future release of Roon…

Following on from Geoff post’s to overcome the limitations of the Apple Airplay protocol, the Denon needs to be connected to Roon via USB or HDMI.

A total of 59 models are guaranteed to be compatible with Roon either via Airplay or as USB DACs.

I think I’ll add a Raspberry Pi as an endpoint, and connect it to HDMI input of the Denon.

What OS will you be using on the RPi? AFAIK, it’s still not possible to deliver multichannel audio via HDMI on an RPi.

Ah, good point, Mike. @DeLub - what happens if you try this - does the Denon get promoted?

Finally came around to do some further testing.

Device is still not listed under Roon tested.

As airplay is rather limited, I decided to connect the Pi to HDMI. When using Raspbian (as RoPieee doesn’t support HDMI) It works… but…

This is apparently due to limitations in the Alsa driver.

However, when using PiCorePlayer, I am able to get hi-res on the HDMI port. And after installing Roon on PiCorePlayer, I even get multichannel via HDMI, but then everything is downsampled again, and I hear pops and clicks…

I’m wondering whether getting a cheap NUC would be a better option.

I’m wondering whether getting a cheap NUC would be a better option.

Others have done this to get multichannel support of their AVRs…