Hi
I am evaluating the trial versions of these two players - ripped music library is held on the same Mac and I stream Qobuz. No MQA, Tidal or anything else.
So far Roon seems to be faster to navigate, less buggy and presents more musical info. But Audirvana sounds MUCH better (wifi feed via UPNP to Roon-ready Lyngdorf amps into Quad electrostatics). AV is also louder.
I did not expect to hear such a marked difference in sound quality. As far as I can see volume is software controlled and there is no DSP, replay gain etc. being used.
My only other thought is - what is Sys Optimiser in Audirvana ? Can it be toggled on and off ?
Anyone else compared the two platforms ?

There is an enormous thread on the Audirvana community

My 2p Audirvana is a pale shadow of Roon in many ways, especially if you are interested in several zones AS is a one zone setup

Thanks. multi room use is of little interest to me. I do like the musical info available with Roon but the SQ tips me towards AV - unless there is something in Roon’s settings that can improve matters. Strangely, Roon displays fewer Qobuz playlists than AV (?) and shows them as just text (pretty much) rather than the pictorial ‘covers’ Qobuz publishes them with.

Sounds like a red flag that something is wrong.

Roon has a signal path to show you if something is modifying the stream of audio. In your case, Audirvana is using UPnP so we know nothing as to what’s happening to the stream. If it’s louder, there is something different about what’s being played.

Look at the signal path in Roon to see if Roon is doing something weird. Can’t tell you what Audirvana is doing though. Louder music sounds better (at the loss of dynamic range), it’s why the loudness wars are a reality.

@Stephen_Judge - I recently tried out Audirvana after not trying it for years and yes it does sound louder to me right off the bat but I later concluded it was a false positive. I will leave my post from before below as it was right after I was done testing.

Unless level matched all bets are off.
Anything that sounds “louder” usually gets the ears attention and tricks the brain into thinking its “better” .
This is usually not the case at all, as @danny says, one of the reason for the loudness wars.
Some of the genuine reasoning for the loudness wars have passed us by nowadays but unfortunately not the results of the wars themselves.

Try and get both stream level matched and then reevaluate.

I have matched volume as best I can (1khz tone measured by a dB meter on the Ipad). Roon seems far more compressed and muddy. Where is this ‘Signal Path’ thing ?

Recently tried Audirvana (Studio) again. The setup and registration process for Windows was much improved v the last time. The software was also less buggy and seems more stable. No difference in SQ that I could hear. Tidal integration is similar. Audirvana is less expensive than roon.

It appears to have some nifty filtering, playlist and dsp functions, but I wasn’t able to try them out much because I had it installed on an HTPC/HDTV setup and the fonts are too small to see from across the room, even at the largest setting.

So I installed the remote app, but it doesn’t have access to any of those features. It’s basically just a list of albums, artists, tracks and playlists.

So, I thought I’d install it on my desktop. To do this, you have to disconnect the first PC from your account and connect the second to your account. Then it has to build its own separate copy of the library/database, and you have to reenter all the settings. Then, it’s not possible to select the other HTPC as the playback device or anything like that. Even if you bought a second license they are both standalone systems, as far as I can tell.

Both have nice UIs, and both have quirks. Overall, though, roon is easier to figure out, more logical, and eaiser to use.

So for me, roon wins on licensing, installation flexibility, multi-system/multi-zone setup and use, vastly superior remote app, metadata, networking protocol, UI, ease of use, overall better polish and “feel.”

Audirvana is nice for a simple organizing and playback system with streaming integration. Considering that they seem to be a much smaller company they are punching above their weight.

Audirvana also costs less, with roon costing ~40% more. But at the end of the day you get what you pay for.

Alright, I did some more comparing with cans this time and there were some noticiable discrepancies with Audirvana vs Roon.

The following are waveforms taken from Audirvana and Roon.

Audirvana Vinyl Rip Preserve Album and Scan Run on Album Waveform - Notice next to the bitrate now the Replay Gain is lowered by -4.8

In my opinion Roon wins here cause they aren’t feeding us false data and making us think something sounds better when it really doesn’t. So there you go, it’s the loudness wars all over again!

making us think something sounds better when it really doesn’t

Where is this ‘Signal Path’ thing ? 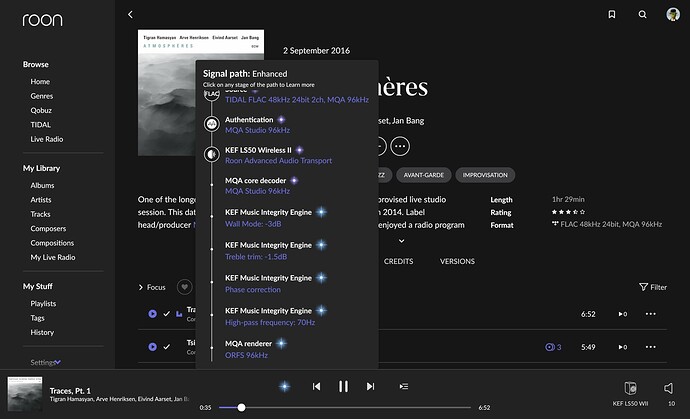 You get there by clicking the little star (purple or blue/white) that’s shown on the left of the track controls.

does it matter if it is ‘making you think’ it sounds better?

Yes. For example, if you think it sounds “better” but it turns out that it only sounds better because the output from Audirvana is higher than from Roon, then it (Audirvana) doesn’t sound better, you just think it does because you didn’t compare like with like. A level matched comparison is the only way to compare one with the other.

Agreed. I’m not arguing that it doesn’t sound better. I’m suggesting that anything that confounds such judgements should probably be taken account of. Put another way, if a straight-up listening test between Audirvana and Roon leads many people to believe that Audirvana sounds better, then it clearly does - “better” is a subjective term. But if the only reason it sounds better is because it plays a bit louder than Roon then it’s meaningless information. Just turn Roon up a bit and the ‘better’ goes away.

No, it’s very easy to trick our brains into thinking something ‘sounds better’ simply by increasing the (perceived) volume.

If you use DRC to achieve a perceived volume increase, you’re doing that at the expense of dynamic range. You’d be better off just increasing the volume.

EQ, DSP and DRC should be something the users choses to enable, not something that is opaquely applied to every recording by a delivery system.

btw. a good example of DRC was it’s use in TV advertising. Regulations restricted advertisers and broadcasters from increasing the volume of commercials above the surrounding programming. To get around this advertisers used DRC to compress the audio on adverts to make them ‘appear’ louder. The regulators have since cracked down on this and now use ‘an algorithm that is designed to reflect human perceptions of loudness’ but it’s why commercials used to (and I expect still do in some regions) sound louder.

Guess I’m weird then. When trying a new bit of kit I will listen at different volumes to see if I like it.

I also listen to it for a while (days or weeks) rather than AB switching between level matched sources.

I thought that Audirvana initially sounded better but after a while it got a bit tiring and I found my listening sessions were getting shorter and shorter.

Blind level matched testing is for measurbators and people who like to argue on forums around the pitfalls of digital volume control etc.

I thought that Audirvana initially sounded better but after a while it got a bit tiring and I found my listening sessions were getting shorter and shorter.

This is exactly what I’m trying to say. When listening to something with a waveform like this

Audirvana Qobuz Waveform1259×115 29.2 KB
it would become tiring quick . This will also take away from the songs SQ.

Audirvana Vinyl Preserve Album Waveform1239×102 12.9 KB
I can listen to for hours without getting fatigue.

BTW, your not weird. Everyone does things a little bit differently, as long as your happy that’s all that matters

Hopefully the TheRiz’s explanation of what is happening makes things clearer.

Nothing weird about you (I hope!), it’s just how our brains work, it’s a bit like adding excess salt to food to make it initially taste better; after a while you realise it’s drowning out the subtle flavours.

And much like salt, DRC is something that normally does needs to be applied (in moderation) at the mastering (cooking) stage, the trick is not to over do it.

If you like the effects of adding additional dynamic range compression then go for it, the ‘Night Mode’ on an AVR will achieve much the same affect. Although it sounds like you’ve already realised why happens when you listen to dynamically compressed audio over a longer period of time.

What’s important is that it’s not being added opaquely by your playback system and that you have the option to apply it or not. Same with EQ and DSP.

When I tried Audivarna it did sound different to Roon. I thought it did sounded a leaner bit had a tad more detail in the highs. Some might like it but I thought it sounded a bit false and processed. The rest of the app was awful so was uninstalled.

there is an old thread about Roon vs Audirvana: Audirvana vs. Roon

I see in the above screenshots that Roon’s waveforms look way better than Audirvana. I wouldn’t take this to mean that Roon is better at playing the audio than Audirvana.

As much as I would love to take this as a win, it’s just a display algorithm approximation. It impacts nothing on playback. If you are going to say Audirvana loses to Roon based on an algorithm to display a waveform, you’d be making the wrong call.

In the case of Audirvana speaking to a Lyngdorf via UPnP, Audirvana has very little to do with the audio. It’s most likely delivering the file data file to the Lyngdorf via HTTP, and the Lyngdorf is doing everything, including uncompressing that file. Take all that with a grain of salt, because I don’t actually know the full circumstances of what is being played, how, and with what configuration. Unlike Roon, there is no simple “signal path” feature that shows you what’s being done.

In the case of Roon Ready to the Lyngdorf, the Lyngdorf is doing very little, mostly just redirecting PCM audio from the network into their DAC.

Unless either app is configured to alter the stream, my bet is that the PCM data going into the Lyngdorf is the same between Audirvana and Roon.