Network Details (Including networking gear model/manufacturer and if on WiFi/Ethernet)
Router: Netgear Nighthawk R7960P-100NAS. The Mac mini running the core server software is connected by ethernet. The MBP’s can either be connected via ethernet or wirelessly - same problem occurs.

Description Of Issue
I am having serious problems with my Roon software ever since I was ‘forced’ to upgrade to 1.6. I run Roon core on a Mac mini 2012. The software plays fine through the connected DAC (Ayre QB-9) on the Core Mac mini. I also have 3 raspberry’s with Audioquest Dragonfly Red’s & Black DAC’s and I can control them just fine with my iPad Pro.

Here is the problem, with my other connected 2 Macbook Pros (running OS 10.11.6 & they both have Roon Bridge installed) I can see them in my “audio” tab on the core Roon Server software and they are “enabled”.

Also in Core Audio on the MBP’s the DAC’s are selected as the desired output. As soon as I select the DAC from the software on the Roon core or using the iPad Pro and start playing music on the DAC’s connected to the MBP’s the selected output icon on the MBP jumps up to the “Built-In Output” in the Audio MIDI Setup window (it makes no difference if the connected DAC on the MBP is a Dragonfly Red, Khadas Tone Board or iFi Nano DSD).

The audio comes through the MBP but there is no control of the volume and the desired DAC is no longer selected. This problem is consistent whether the MBP’s are connected by ethernet or are running wirelessly.

Here are some screen shots 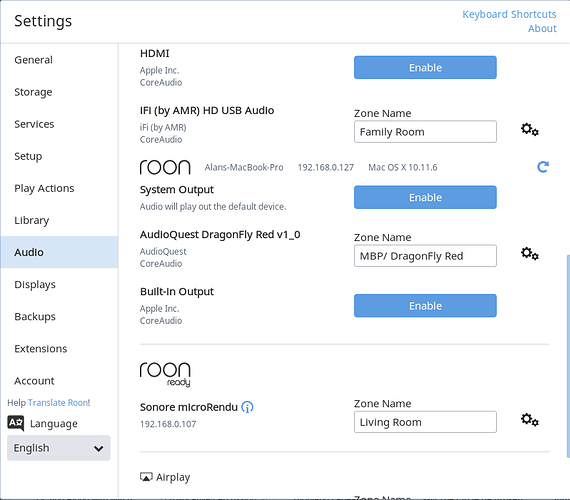 3.In the Audio MIDI window showing the default output: 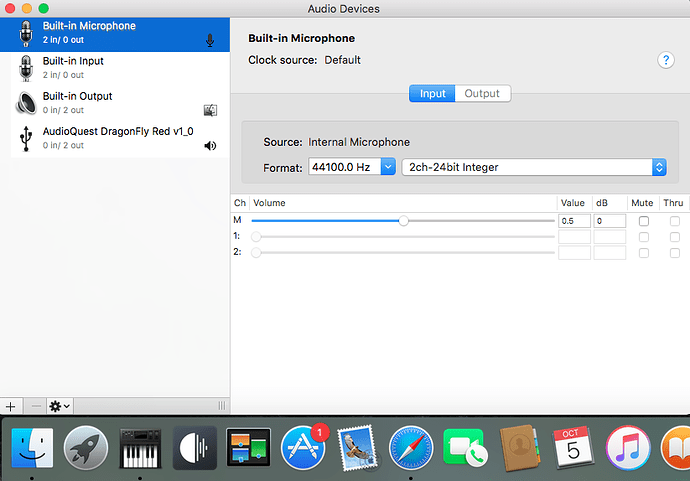 Just an update to remove any questions concerning the router or the network in my home. I disconnected both the Roon Core server and one of the MBP’s (from both the wired and wireless home network) and connected them to my iPhone (it was not connected to my home network either) and connected both computers to xfinitywifi (a national wireless network open to those who do subscribe to their home internet) through a hot spot on my cell phone. The same thing happened on my MBP as before. The Icon in the Audio MIDI window jumped from my Dragonfly Red up to the Built-In output. The music was playing through the Dragonfly (it appears it was) but I had no control of the volume on my MBP. So the problem has nothing to do with my home network.

So just to verify:

Moving forward, we are hoping you can do the following:

Thanks Dylan for responding. The pictures above show all that you asked for. I have shot 4 short videos on my iPhone but your website does not allow .mov videos. So no way to attach them. I did everything as you desired. Additionally, this happens to 3 other DAC’s, so it makes no difference which one is selected it immediately jumps to the output above. When 2 DACs are connected it jumps to whatever is above the selected output. This behavior is the same on 3 MBPs and one other Mac mini in another room. for this demonstration I connected both computers vis ethernet (my whole home is CAT 6e wired). However, the same results can be seen if I play music wirelessly.

Here are screen shots. The first shot shows the MBP/Dragonfly Red is the selected device on the core machine.

The next shows what Audio zone will be getting the output 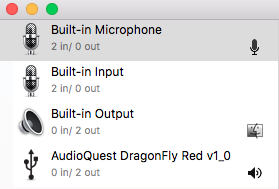 Finally after the music starts it shows the output jumped to the output above the original selectedMBP/Dragonfly Red. 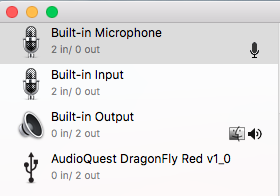 I have answered your questions above, now what? I essentially have a software system that does not allow me to have control of my music in the family room, in my secondary system in the basement, or on may patio.

Thanks for the screenshots here — In Roon, is it still the MBP/DragonFly Red that is selected? Or has it switched to Built-In Output as well?

I made three tests with all the same results to the MacBook Pro, the icon on the selected MBP/Dragonfly Red jumped to the input above in this case to the Built-In Output on the MBP.

Scenario #1: Core Server and MacBook Pro connected via ethernet and the music controlled from the core server. Time: 9:10 am

Scenario #2: Core Server connected via ethernet and and MacBook Pro on same wireless network, the music controlled from the core server. Time: 9:11 am

Scenario #3: Core Server connected via ethernet and and MacBook Pro on same wireless network, the music controlled from the iPad Pro. Time: 9:12 am

Thanks for the timestamps, @Alan_Buckbee,

Update — The report was received and I’ve passed it along to the team.

Thanks Dylan, My core is up 24/7 so if additional diagnostics are needed go ahead and run it anytime that it is needed.

Thanks, @Alan_Buckbee. I’ll be sure to follow up as soon as the technical team has fully analyzed the report and provided their feedback.