Roon we need to talk (about genres)

I really love Roon, and I cherish what it’s done for my music library. But one thing that confounds me is the current setup for genres. Not only is it difficult to edit genres, add new ones and so on (Graphical Genre Hierarchy Editor), but I am also dismayed at the existing genre hierarchy. 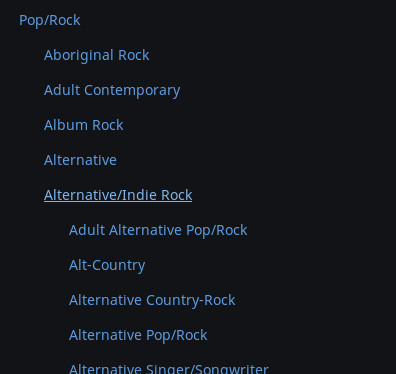 For starters, pop & rock are combined! Both of these should have their own top-level genre. Of course there are many, but I can only think of a few when pop/rock accurately describes a record. It’s really confusing and annoying to have pop music littered in with rock music simply because they both have this top level genre. Especially when you want to shuffle a genre (and by the way is the radio influenced by genre groupings??).

Secondly, alternative and indie rock are combined. These are not only disparate musical styles, but they are disparate historically oriented musical styles and combining the both, I think, is just as bad as the pop/rock combination. To add to this, there is the confusingly singular ‘alternative’ option.

My request is that we have an overhauled genre list implemented, or at least the ability to manually alter these things including their descriptions, with the ability to combine genres. Pop should be its own genre, not combined with rock. Come on guys

Is this something that would be looked at?

annoying to have pop music littered in with rock music

I think you have that backwards

May I chirp , Classical suffers similarly

Quite often Harpsichord and Organ get bulked as Classical

I think the real moral of the story here is that there will never be a consensus on genres - what music belongs to what genre and what artists do. It’s fine for the Roon metadata to provide for defaults but there needs to be an efficient and easy method of structuring and assigning genres as per user preference. It’s not something Roon can get right on its own…no software could.

For that reason, I rarely use genres. Occasionally as a radio substitute.

The current genre hierarchy is based on Allmusic’ - https://www.allmusic.com/genres

It’s fine for the Roon metadata to provide for defaults but there needs to be an efficient and easy method of structuring and assigning genres as per user preference. It’s not something Roon can get right on its own…no software could.

Yeah. I really wish they could expand their genre mapping to also include editing of the hierarchy.

It might work if genres worked just like Tags. You can tag a genre with another genre tag and thereby create one’s own hierarchy.

I agree that a complete overhaul is needed for the role of genre in Roon.
I just wonder why Roon needs to have pre-coded genres and hierarchies of genres at all, let alone that whoever did it took on a fools errand.
I suggest:

Roon, why don’t you get out of the genre business and leave it to the users?

This is easily done. Just go to import settings, turn off Roon’s genres, and turn on your own.

and turn on your own.

So if we were to do this, Roon wouldn’t look at the Allmusic database as is indicated above, but would simply use the embedded tags? That just goes back to simple genres, of one per record until altered (right?). I like the way multiple genres are able to be added as is present. It’s just that some of them are awkward or wrong.

If we could edit the hierarchy that would be great. Even if it’s just simple text editing. Alternatively, I’d like to see the ability to add more genre categories to that import dialogue, so that when something comes up as ‘alternative/indie rock’ it can be assigned to one of those. Then I can choose to add the second genre (if in the rare option it’s both alternative and indie). 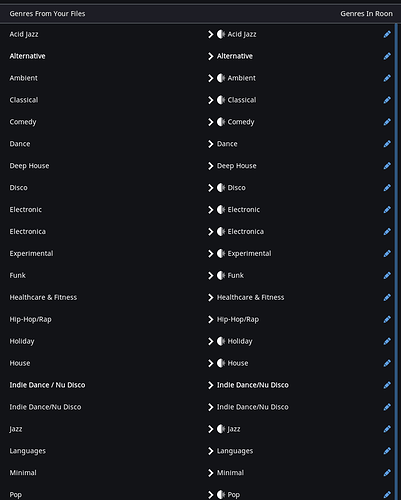 I think the crux is the ability to edit the genre hierarchies. At least if there is to be no overhaul of the genre hierarchies, then we should be able to do it. It’s such an expressive program, but this seems to let it down in my opinion, when it could make it so so so much better.

I understand this is a repeat of my prior comment, but I’ll add some detail. What if Genres worked just like Tags? They already appear like them in the browser interfaces, but we cannot manage Genres like tags right now.

This would also allow modification of the Genre hierarchies by simple Genre Tag assignments and reassignments. No need to do anything to the actual work or artist, unless you want to assign another lowest-level Genre to that artist or work.

The current performance of indirect Tag queries within Roon right now is a bit of a concern relative to the potential responsiveness of the system – i.e. this would have to be improved in order to avoid heavy Genre users from experiencing the same issue as us heavy Tag users, but other than that, I see this as a workable and indeed dynamic solution.

You could even then assign Genres Tags to regular Tags and Genre Tags to Playlists, whatever objects. Basically, just duplicate the Tag management system (with requested enhancements, please!) and apply it to Genres.

Add some Boolean logic capability to Tag focus and queries, and you’ve quite a powerful system!

Yes, genres are imported from your own files, but you can assign multiple genres. Roon allows you to specify what characters it should use to separate the genres in a file’s genre tag.

Of course, using your own genres is still subject to Roon’s biggest genre weakness: Genres are associated with albums, not individual tracks. So all of the individual genres read from album’s tracks are lumped together at the album level.

Joining the conversation, representing the voice of Electronic music.

The current classifications are plain wrong. (Prodigy as Techno? Come on…)

Perhaps the solution is to have a community based database. Think about it. Can be a big success (look at Waze with it’s community based maps and reporting) and lot’s of fun for all involved.

How does this differ from genre mapping ?

Joining the conversation, representing the voice of Electronic music.

If I could love this post twice I would. I’m also an electronic music guy, but it’s fairly minor so I wanted to gain attention with something more mainstream. The default genres that download are laughable sometimes. Tbh the only time (and even then it’s off) it seems to work well is jazz.

I love Roon and I’m not shitting on the program, but I think this part needs improvement.

Perhaps the solution is to have a community based database.

I think this would be a fantastic idea

I like the idea of using tags… rather than looking at functionality in isolation and building features and functions individually. A point in case… folders. The argument for folders seems to be similar to the one here. The Roon “way” is tags. What would be good is if tags could be “auto populated” - so the Allmusic genres are tags that get autopopulated (and Roon stores the source of tags) and folders manifest as auto populated tags (with source stored). Going forward it would open the road for different (and more) sources - eg AllMusic, community sourced database etc. Users could edit the tags, nest the tags (giving the hierarchy) or create their own tags.

Of course, using your own genres is still subject to Roon’s biggest genre weakness: Genres are associated with albums, not individual tracks.

Very true. I learned about this fact only a few days ago and I am pretty frustrated to be honest. All of my multi-genre compilations/samplers/mixes (call it whatever you want) are not usable in shuffle or radio mode due to that. I am wondering if we can expect this to be changed in a future release.

How does this differ from genre mapping

Very different. Genre mapping is just a translation of one term in our embedded genres to the equivalent term in Roon’s Genre hierarchy.

What I propose is much more flexible and not rigid when it comes to parents and children. And the interface to handle it like tags would be like the current Roon Tag management (with the various enhancements we Tag users have been begging for). The Genre mapping tool is (1) very difficult to use and squeezes a whole bunch of information into a narrow, constricted window that requires excess scrolling and (2) doesn’t really do very much in terms of power users.

Incidentally, last night I was reminded why I rarely use Genres within Roon. I was trying to explain to my 9 year old the origin of Rock from Blues music. We were listening to Led Zeppelin. They I went to the Blues Genre and what was there? Led Zeppelin, Cream, Derek and the Dominoes, among genuine Blues artists. Now, those rock bands definitely and fairly fall into the Blues Rock genre, but bona fide Blues? I’m not denying the connection, but that’s wrong. When I Shuffle or Radio Blues I don’t want mostly Classic Rock.

Back to the interface idea, in my Roon world, I’d want to be able to left click then select the Blues Rock artists I don’t want in the Blues Genre and simply Edit and remove the Genre Tag from them all at once, just the way I could a regular Tag.

You can edit Genres! Who knew? I never use them, mainly because I don’t find the concept particularly useful in a music player but mostly because I will inevitably disagree with the ‘who is in what’ choices that someone else had made. It is not dissimilar to reading bad/good reviews of albums you love/hate.

Not so easy, Andy.
I recently imported my library of music into a new installation of Roon with the Genre tag turned off.
I was surprised to find that my Genre Italian is placed in Italian Music within Western European Traditions. Likewise my Indian music is placed in Indian Subcontinent Traditions. My Genre Cocktail amusingly falls into Alternative/Indie Rock but consists of big band, Frank Sinatra etc etc.
So, yes I have my Genres and yes I tell Roon to use my Genres but Roon persists in grabbing control and creating meaningless hierarchies.
Why does Roon care so much about Genre that it imposes its control, but not about the plethora of spellings of artists? It kills me.