I run Roon Server on a Mac Mini. My music is stored on a NAS. As well as importing all the music into Roon, I have it all imported into iTunes. In iTunes, most of the music resides on the path:

From there, the music is organised by artist and album. I imported the music into iTunes a long while ago, without copying it to the iTunes library. Now, for about a third of the tracks in the library, when I do a Get Info the file information says the path is, for example:

All the tracks in the library up to around the artists whose name starts with a J are like this. After that, track locations are like this:

which is what I would expect. To further complicate things, that particular RoonStorage folder doesn’t actually exist. Within RoonMounts there is a Music folder, and two other RoonStorage folders with different number strings on them. However, the files play fine in iTunes. Within Roon, if I pick an album and select Other Versions, the file name there has the same number string as above (one that doesn’t actually exist in the RoonMounts folder).

How could this have happened in iTunes? I don’t see how iTunes and Roon are related at all. I don’t even point Roon at the iTunes library - it only looks at NAS folders.

Hi @Stephen_Dawson ---- Thank you for the report and sharing your feedback with us, both are appreciated.

Moving forward, can you provide me with a screenshot of your “storage” tab found under settings so I have an idea of exactly what you are seeing on your end.

Lastly, can you provide some further insight into when you first started noticing this behavior OR has this always been your experience while working with Roon? Important data points to consider:

I really have no idea how long all those iTunes files have been pointing at RoonMounts. Haven’t touched that iTunes for months and months, but just happened to look at a file’s info yesterday. I can’t even begin to imagine why iTunes would pick up on RoonMounts - iTunes and Roon are completely separate. I haven’t adjusted any storage locations or moved a DB since everything was set up a long while ago.

Is it normal for the file name that appears when you select Other Versions to reference RoonMounts? And do you know why the folder in that filename doesn’t actually exist? I’m guessing it’s actually referencing the Music folder in RoonMounts, but using an alias or something. Which would also explain why files still play properly in iTunes. 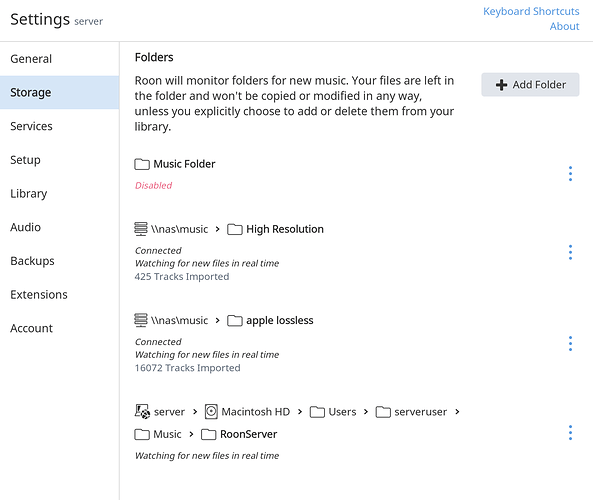 Hi @Stephen_Dawson ---- Thank you for the follow up and providing the requested screenshot, both are very appreciated! Apologies for the slow response.

When you are woking with a NAS + Roon on OSX a " Roon mounts" folder will be generated no matter what, so this is behaving as expected. However, the real question here (as you’ve pointed out) is, why would that be showing up in the iTunes location?

With this in mind, may I ask you to please verify the following for me:

When I add music, it goes straight on the NAS. Fact is, I haven’t added anything new for probably a couple of years, because I now use streaming services. When added to iTunes, I do not let iTunes copy the NAS music to the iTunes library. It is all “referenced” on the NAS.

As I said, only about a third of the tracks, everything up to somewhere in the Js by artist name, seem to reference Roonmounts in the file info. I am totally perplexed as to how this could have happened. The iTunes library was built a long time ago. I replaced the hard drive in the mini at one stage, but everything was cloned across.

Hi @Stephen_Dawson ----- Thank you for touching base with me and providing the requested insight. Both are very appreciated.

Moving forward, we believe that we’ve traced this to some unexpected iTunes behavior that can update paths for tracks in your iTunes library. Our guess is that this might have happened during some temporary connection problem with your NAS, which is pretty common.

While this isn’t a Roon issue, we wanted to walk you through a walk around that may help:

OK, seem to have got it all back into shape now. Certainly strange how iTunes seems to pick up on Roon’s version of the NAS mount. Started to get a bit worried after I removed the NAS watched folders and re-added them, and then Roon started to re-import all the tracks. But it seems like all my edits survived the process. Does it just re-hookup the imported tracks to the database?

Can you also please answer my other 2 queries about whether the path shown in the Album Versions dialog is correct in referencing RoonMounts, and why the long string of numbers in the file path doesn’t actually reference any actual folder in RoonMounts?

When you add a network share to Roon as a watched folder on Mac or Linux, we need to “mount” the shared directory into the local directory structure on your system. This is just how network shares work on non-Windows systems, and is also what OSX does if you navigate to a shared directory in Finder. One difference is that Roon mounts shares in /Users/name/Library/RoonMounts/RoonStorage_guidinhex, while OSX mounts them to /Volumes/Mounts/sharename

It turns out that there’s some code buried in OSX that knows that both /Users/name/Library/RoonMounts/RoonStorage_guidinhex and /Volumes/Mounts/sharename
point to the same network share, and replaces the RoonStorage_guidinhex with sharename when you view the folder in the Finder. The actual paths and directory names don’t change, but the display in Finder does. That’s why the long string of numbers doesn’t appear to match the folder name. The album versions tab is showing the ‘correct’ path, although we normally prefer to display it differently.

This is also my guess at how the paths in iTunes got so confused, at some point the /Volumes/Mounts/sharename mount was gone for some reason, but the /Users/name/Library/RoonMounts/RoonStorage_guidinhex one still existed, and iTunes remapped some of the paths so that it could still find the files.

Hopefully this makes everything reasonably clear, let me know if I missed the correct detail level.

iTunes certainly seems to have a mind of its own when it comes to the share names. I suppose as long as the files still play it doesn’t matter that much.