This is an image of the Sonicorbiter SE being used as a playback device from the latest ALPHA build of Roon.

You can see the full effect of a RoonReady device. The signal path is shown all the way to the device and information about the device is displayed. 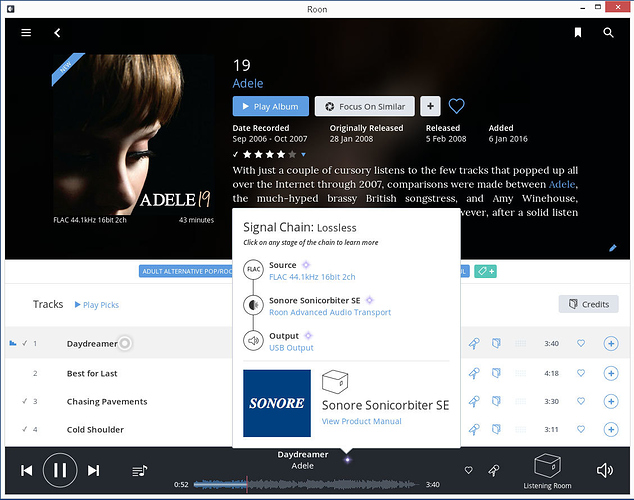 What would be a good DAC to use with this for DSD?

Any DSD DAC will work so it all depends on how much you want to spend. And what kind of sound you are looking for. The iFi nano is a great DAC that supports DSD and it’s only $199.

Ayre QB-9 is one of the highest rated DACs out there but it costs $3,250.
Ayre Acoustics QB-9 DSD DAC Review

Great thanks. Is the orbiter plug and play? Is it hard to set up?

I happen to have a QB-9 and this box seems like a better alternative to the Celeron NUC I’m using now. What hardware upgrades would make it superior to a NUC?

It’s basically a cubox box with lots of good audio playback software (RoonSpeakers+ others for non Roon users) installed to make it easy to use in just about any setup, and a linear power supply. AFAIK, there isn’t much to upgrade. I guess you could add an external audiophile USB device of some kind if you want to go there.

Would it support a touchscreen or do you use it headless?

Once the RoonReady player is enabled you can control everything from Roon.

The sync should be fairly close.

The general rule for synchronised playback in Roon is that like network zones can be grouped together. Meridian with Meridian, AirPlay with AirPlay, RAAT with RAAT etc.

The Sonic Orbiter SE supports both Squeezelite and RAAT. It may be that Squeezelite is the appropriate protocol to group it with a Squeezebox Touch. Let’s drop a flag for @brian to clarify.

When a Sonicorbiter SE is being streamed to from Roon as a RoonReady RAAT, can playback be synced with other Squeezebox Touch end nodes?

No, we don’t support mixing different synchronization technologies. That is a very difficult problem. I went into more detail in this post.

So you would need to use it in squeezebox mode to sink with other squeezeboxes.

But if you didn’t need syncing you could use it in Roon mode.

hi
i want know how to settings

Ah, interesting… Would you expect sonic quality to be better via Sonicorbitor SE as a RoonReady RAAT than using it with Squeezelite? (I know the answer is to try it myself, but hey, inquiring minds want to know ;-).

But it sounds like a Sonicorbitor SE should provide all the same capability and potentially more than a Squeezebox Touch (albeit, without the display). I just need to decide if I want to keep my other SB devices or eventually switch all to RoonReady RAAT devices. Right now I’m using 4 SB devices in my home and often sync them.

We don’t officially support Squeezelite (but many people have found that it works fine).

Sync quality is much better with RAAT (both in terms of tightness of sync and the disruptiveness of the mechanism used to correct for clock drift). Roon+RAAT linking is probably always going to be better than Squeezebox because the underlying design of RAAT’s zone linking system takes into account over a decade of progress that has happened since SlimDevices designed their technique. And, of course, we focus more effort+attention on RAAT than Squeezebox internally.

Roon+RAAT can support more/higher-res formats in a bit-perfect manner than Roon+Squeezelite. This is not relevant unless you actually have content in those formats.

I don’t know how Squeezelite volume control works, but we have a few different options including a nice noise-shaped dithered volume control + a mechanism for passing volume commands onto a USB device. If you are planning on controlling volume from Roon, this may make a substantive difference.

Another factor to take into account Michael is that the Sonicorbiter is wired only, not Wi-Fi. In another thread on the Sonicorbitor Andrew G referred to HomePlug, a powerline based network, which sounds very interesting as an alternative to Ethernet cabling.

A post was split to a new topic: SQ impacts of volume control before the preamp

That suggests to me that there is almost certainly a way to bypass volume, and it would be weird if they didn’t provide a way to do it in software for the non-audiophiles.

The thing I am not sure of is whether they can fully support DACs that expose their internal volume controls via USB commands.

The Roon implementation of SB doesn’t give you ALL the features of SB - such as those based on plugins. It’s main focus is giving you the music playback capabilities. Some of the other features aren’t there.