I’ve just got a Raspberry Pi 3 Model B with Hifiberry Digi+ HAT for my dad, so that he can have a Roon Endpoint into his Denon 4520 AVR.

But I’m confused about which of the Roon Ready (Endpoint? Bridge?) images to install after the Raspbian Jessie Lite OS is installed:

Do both support RAAT or only Option 1 (Roon Bridge for armv7hf)?

I definitely do want RAAT for him.

Both are RAAT – there’s little to no difference in operation (RoonReady = Roon Bridge + customization & certification for the specific device).

HifiBerry’s image is auto-updating and makes for an easy install. Mind that you cannot log in to troubleshoot if things are not working as they should.

Roon Bridge is not an image, but an installer that works on top of an already working Linux install. If needed, I made a little guide for the whole process here.

From your options, I prefer 1 – but if you’re less comfortable installing and maintaining Linux, option 2 will perform just as well.

Thanks Rene, regarding “but if you’re less comfortable installing and maintaining Linux, option 2 will perform just as well”

do you mean that Linux (e.g. Raspbian Jessie Lite OS) doesn’t need to be installed for installing Hifiberry’s Roon image?

Hi Sean, yes, that’s correct. The HiFiBerry image is a stand alone turnkey image. Just burn it onto a microSD and boot up the Pi; no Linux knowledge required. The downside is that you can’t log into it with a terminal and configure things, but you can access the FAT partition on the SD with a PC and configure WiFi (if required).

If you are thinking of a Linux install with Roon Bridge, rather than the HiFiBerry image, then checkout Rene’s DietPi guide. It is a very simple menu driven install but needs a keyboard and screen on the Pi when first configuring. They can be taken off and a terminal opened as usual later.

Thanks Andy. Dad won’t need WiFi since his Denon 4520 has a 4 port ethernet switch built in (handy!)

So for him it looks like the Hifiberry Roon image is the go. I’ll get onto it this weekend.

René - are you sure that the HiFiBerry image is auto-updating? I’ve not seen any evidence that it is. And the latest version that I’ve downloaded and burned onto my SD is claimed to be version 1.0.6 by HiFiBerry, but still reports itself as 1.0.4 in Roon…

DietPi guide. It is a very simple menu driven install but needs a keyboard and screen on the Pi when first configuring. They can be taken off and a terminal opened as usual later.

Another vote for Dietpi, albeit it’s not as straightforward as Jessie to follow install instructions as there are a few screen based selections.

I seem to remember doing my whole config through SSH though, rather than attaching keyboard and screen, but I could be mistaken.

Like most Linux distros one of the first things it does is expand the file system and download updated modules. The login prompt appears after that. I had understood that you couldn’t open a terminal until that process was complete, but haven’t tested it exhaustively.

After burning the DietPi image to a sd card, I edited the dietpi.config with Wordpad (to give a static ip and wifi details) and was able to do the whole set-up with SSH.

So i’ve setup the Raspberry Pi 3 with HifiBerry’s Roon image for my Dad. As per attached it’s working really well !

It’s the Digi+ transformer version, with coax going into dad’s Denon AVR 4520 receiver. He doesn’t need to configure the Pi 3 for WiFi because his Denon has 4 built-in ethernet ports. So the Hifiberry image was the most straight forward for his setup.

His 4520 has built-in airplay (via ethernet) which is what he’s been using the past few years but RAAT sounds so much better, even from 16/44 music (within Airplay’s abilities). 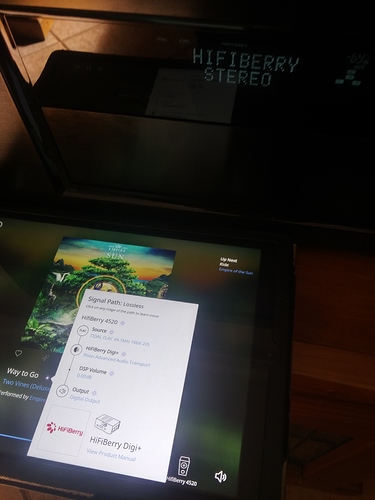 Just a correction @RBM for future readers, so that we do not mislead.
Hifiberry RoonReady image is loginable now. U:pi, P:hifiberry.
It is a Debian/Jessie build, so… $ sudo raspi-config for password change.