don’t know where to put this, but I hope to find some Mac users here

I’m a Mac user and only recently am using Roon. As it turns out, Roon can’t handle the iso files I have from my SACDs. So I thought to convert those files to a Roon readable format, e.g. FLAC or DSD, etc. Browsing the internet I found the ISO2DSD app from Sonore, but it won’t work on my Macs - some Java problems I can’t solve. I also tried XLD that reads the iso file but gets stuck when proceeding after reading the embedded cue sheet.

Is there a Mac user here who can help me out with some advice?

I am not a Mac user but this looks like it may do the job.

with JRiver.
load iso, than convert files to DSD

When you say app, do you mean the .jar? I just click on the .jar and it opens the GUI and runs fine. Have you followed the instructions for OSX usage here. 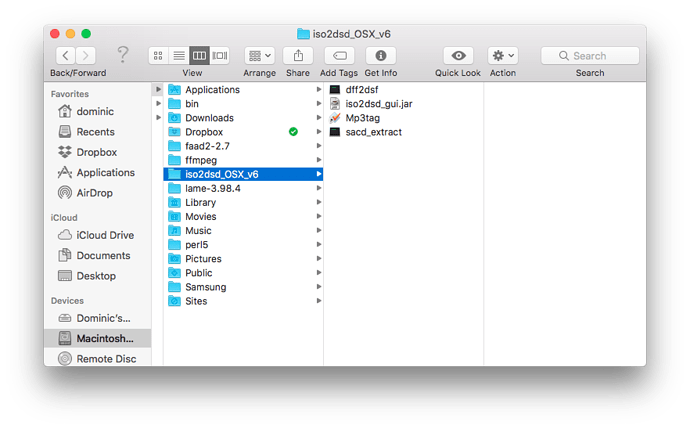 ISO2DSD works fine in OS X, but you do need some Java interpreter installed. (http://java.com)
I use it a lot, but haven’t tried it High Sierra just yet (but have a couple of discs awaiting ripping)

I can report it works just fine in High Sierra. I used it last week to rip a few SACDs. I am very pleased at the performance of the software.

This is the link to the Java file that needs to be installed.

Ouch! Of course I haven’t tried the obvious: That did the trick. Thanks for reminding me!

It just stopped right after starting. But as Roony pointed out, I could use JRiver to do the job which I totally forgot about. That works fine.

ISO2DSD just stopped right after starting. But as Roony pointed out, I could use JRiver to do the job which I totally forgot about. That works fine.

@Tony_Reimann’s recommendation for TraX is a good one. I’ve used it extensively to convert 100’s of SACD iso’s to DSF, and it works really well. Much more functionality than ISO2DSD.

Can you describe the additional functionality? I put an SACD into an Oppo player and get DSD64 files that I add into Roon. What am I missing by doing it this way?

You’re not missing anything if that’s all you want to do. With TraX you can also convert directly to other standard formats — with an extensive choice of conversion parameters for each of those, you can batch convert iso’s, you can specify directory-name formats and locations for the converted files, you can inspect and edit metadata in the iso before you convert, and so forth. As you might imagine, TraX also has a more fleshed-out UI to accommodate the additional functionality.

I have no affiliation with the developers — whom I believe are Hungarian — but as I’ve said a number of times, it’s a solid tool and has been very useful for me.

Thanks for the info. My needs are simple. All I want to do is rip SACDs so that they are accessible to me within Roon. I have ripped my entire collection now so the only needs I have going forward are for newly acquired SACDs of which there seem to be fewer and fewer that I am interested in acquiring. Again thanks for posting about the software.

So, thanks to you I upgraded my Java thing and was able to run ISO2DSD. I also downloaded the trial version of TraX and ran a little test with Pink Floyd’s Wish You Were Here SACD from 2011 (https://www.discogs.com/Pink-Floyd-Wish-You-Were-Here/release/3217934). As the trial version of Trax only converts the first three files, I was only able to test the stereo files, but as I only have a stereo set here, that was more than enough.

JRiver’s Media Center is able to play iso files, so there never was a need for me to do convert files. In the list of music files one simply chooses the file(s) to convert, and selects the convert option in the menu. It then gives you the option to choose one of many convertion options including DSD. In a second field you can choose between DSD (64fs / 2.8 MHz) or Double DSD (128fs / 5.6 MHz). I took the first which also was the option that was pre-selected, but that might have been because it’s the first option in the list. There are some more options that belong to a more general use of the converting tool, like DSP settings, bit depth, output folder, etc, but nothing more specialized for DSD export. I don’t know if there is anything different in the Windows version or if you can do more enhanced convertion using the terminal. You can change the metatags within the program before converting, so you wouldn’t be limited to the pre-written information of the iso file.

Sonore’s ISO2DSD is a simple Java app, that stores the converted files within its program folder. You can select iso files, but also other music files for convertion, but I only tested the iso file setting. After selecting an iso file you can choose the channels (dual, multi), and with a SACD iso with both, the app would only convert those selected channel versions. There are different output options: Phillips DSDIFF, DSDIFF Edit Master, Sony DSF, and Raw ISO. The first two convert the files into a single file, Sony DSF is the one that seperates the files form a single iso file. I chose that option. The app creates a cue sheet, if you wish to (important for the first two output options) and has a “Convert DST to DSD” option. Nothing else to do here, no tag reading, or changing.

The TRAX audio SACD Extractor comes as a posh program with all sorts of things you can change. It has a tag editor and many possibilities of changing the computer usage for converting, output formats and digital signal processing. I haven’t tested the most of it, as I don’t know so much about the little extras of signal processing and just let the app do its job after choosing the DSF output format.

JRiver’s Media Center costs some money and you will have the converting option as a plus as the program is mainly ment to manage and play your media files. TRAX is more expensive than Media Center, but featurewise is specialised to convert music data where ISO2DSD is a free app with basic converting features.

Listening to the music after their convertion I couldn’t tell the difference between the ISO2DSD files and the TraX files, but compared to them, the Media Center files sound boring, flat and somehow dead. The first two have more differentiation potential and are punchier with the bass. Again, I only used the presets of each program, so it might be possible that the equalizer settings within Media Center will also influence the DSD convertion.

I made this little test for myself, to find out which program would suit my needs, so this might not be what you would like to get from a converting program. I won’t use Media Center any more for converting, because of the poor sound I get out from it, but also because of the bad GUI. I will do some more digging in ISO2DSD and TraX.

I now decided to buy a copy of the Trax software. I think it’s worth the money. Thanks Tony and David for that idea!

Yep, i agree, had no issues converting a couple of ISOs yesterday!

I use Trax and like it a lot…I feel it was worth the cost of admission.

I just converted two in a row, which worked flawless. You have to add isos that show up in a list, which works as usual. You are able to change the metatags including adding covers, etc. but don’t forget to save the changes for each track. After hitting the Convert button it just plays down the listed items. I haven’t tried a SACD with multichannel content together with stereo only SACDS though.