I’ve been having this problem on and off since day-1 with Roon. I had it working fine for about 6 months or so when for whatever reason Roon lost my library and I had to rescan, so problem has returned. 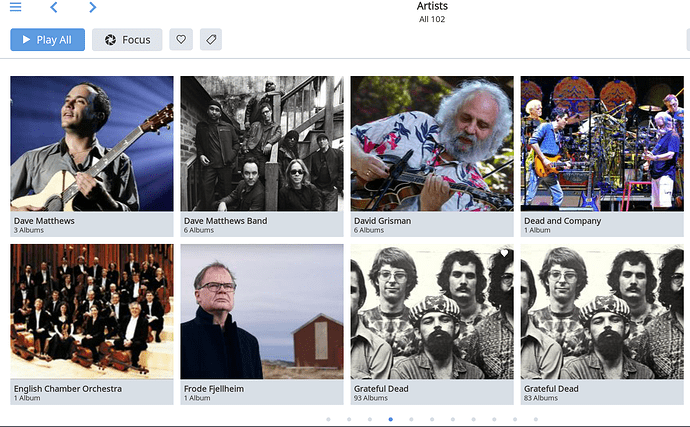 See the Grateful Dead appear twice with different counts of albums. I’ve confirmed that the albums are unique in to both instances (i.e. first GD instance has 93 unique albums that don’t appear in the second GD instance and visa-a-vis).

All the albums within each instance of the group are complete. In that no albums are splitting, just the artist is splitting.

I’ve poured over the album meta data doing side by side comparisons and am not seeing anything to cause the division.

I know how to fix it, I’ve done it a few times now, but am getting tired of having to do this every few months. Especially when it involves over 175 albums for the one artist.

The library sits on a Synology NAS that is dedicated to my music files. The Roon Server resides on a 2015 Apple MacMini, fully loaded and dedicated as Roon server only. Everything is hard wired together through a router, these boxes are not wireless.

Still stranger is that I didn’t tackle merging the artist 2 days ago after it reverted, then went to turn on some music and found the albums all under one instance of the artist. Then today I found them split again without touching anything.

Any help and ideas are greatly appreciated.

Give them at least 24 hours, sheesh…

This is for @joel. It looks like equivalence problems.

Ludwig is it still too soon to ask if Roon support can look into this?

We’re are preparing to release “merge” functionality that should resolve this for you. I don’t have a firm time frame but it’s likely to be in our next release.

I’m surprised this is happening so often for you, since it doesn’t appear to be related to Roon’s metadata – I only see one real entry in our system for The Dead, so any albums we identify should be attached to that one artist.

Are the albums all identified? Any chance that you’re adding new albums while parts of your library aren’t present?

Say, half your library wasn’t available when you did the most recent import, and the albums were not identified (like you might see with some Dead bootlegs, for example). In that case, it’s possible Roon is creating additional artist entries on import, based on your collection at the time. This is possible because the albums aren’t explicitly matched to a “real” artist in our database.

This is a known issue that doesn’t come up very often, but either way this should be a thing of the past soon, so apologies for the trouble and thanks for your patience here @rayski!

Mike thanks for getting back. I appreciate it.

The complete collection resides on the same NAS and in the same primary folder. I’ve used your recommended file structure:

In regards to the library not all being present on startup or rescan, the Dead portion of the library is pretty stable and has been there for a while and just a couple of weeks ago all resided within the same Roon artist instance. Again the library is physically located on one NAS (RAID 5) in the file structure described above.

Interesting enough one day this week I opened Roon and found just one instance of the Dead with all 175+ albums, but the very next day it was split again.

You should know my NAS automatically shutdowns every evening and automatically restarts the next afternoon. The Macmini where Roon Server runs is up 24x7, only shuts down for software updates.

This is likely the crucial information. When @brian reproduced my original ticket for what is probably the same bug, it was disconnecting and reconnecting storage that triggered the problem and caused artists to split and/or multiply.

Your bug may be different from mine. But they are on this whole area and it will get fixed in time. (It’s not a simple one, I think.)

It would be very interesting to see full details of what is in your file tags.

Joel I think you’re on to it. So I started looking at the tags and there are big differences. The first Dead artist instance:

Here is the second instance:

So how tightly coupled do the tags need to be?? It seems the tags is the 1st instance are all included in the second artist instance. I don’t see anything unique between the two instances, just less of them.

Joel any hints what I should look for in the tags between the two instances of the artist? I see the first instance has a tag of “JamBand” where the second instance has “Jam Bands”. I don’t see any other uniqueness in the tags. But even the Jam Band tag difference when looking through the albums sorted in those instances not every album has a Jam Bands (or JamBand) tag.

Ideas on things I can look for here?

My Roon Core was forced to restart due to non-related software update and now just one instance of the Grateful Dead with all 175+ albums. I wouldn’t mark this as a closed issue because it does go back and forth here. Right now it is forth, tomorrow or the next day could be back. I tell you this though because maybe this jumping between one and two instances of the same artist is a hint to root cause in itself…or not.

I’m back to split artist again.

Joel is there anything I can hunt for in the tags? Things to avoid, correct, look for?

There’s another possibility which is that your different Grateful Dead albums are getting back metadata from the Roon Metadata Service which yields the multiple composers. There’s no real way to work around this at the moment, but it is fixed in the forthcoming 1.3.

After a lot of poking around and trying a few things what I found is that the divide of albums between the two instances is whether or not ROON was able to identify the album. If ROON marked the album as identified it went in one instance, if it couldn’t it went in the second artist instance.

The artist instance with all the tags was the one ROON could identify, the second instance had very few tags and all albums were marked ‘unidentified’.

I found if I edited the meta data and modified any single field the album remained marked as unidentified but relocated into the artist instance that originally had only identified albums.

I tried with a few of the unidentified albums to have roon try to re-identify the album. Roon would ask me for some hints (i.e. artist name and album). I could find the album in the list of options, but when I clicked it I was presented with a dialog box that asked if I could recognize anything but the box was empty and I was unable to do anything but cancel the dialog. Album always remains unidentified.

So right now I have all 175+ albums under one artist instance because if the edits I did. I suspect though next time Roon does a rescan I’ll find the artist split again. Just a hunch at this point.

Ya as expected the fudging with the meta data fields didn’t hold up. I’m back to split artists again. I’ll wait patiently for v1.3.

I have had this issue as well. Here is my solution. ( see attached screenshots ) 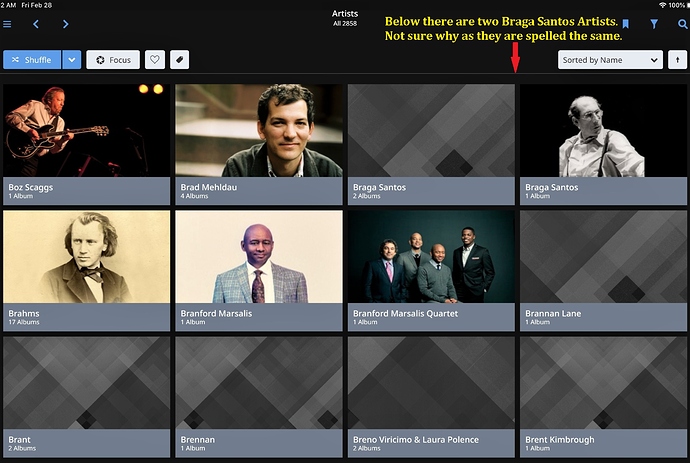 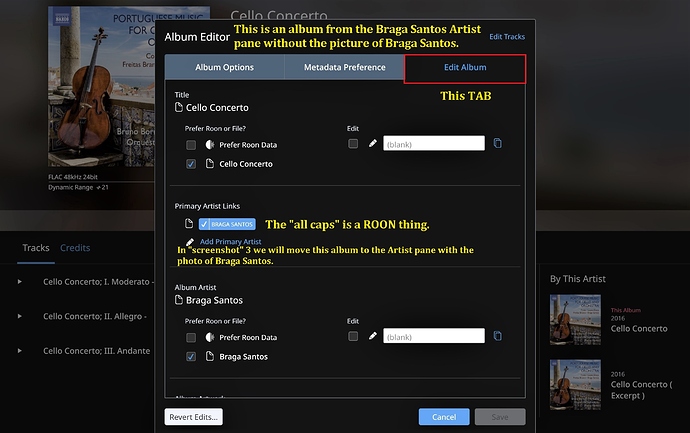 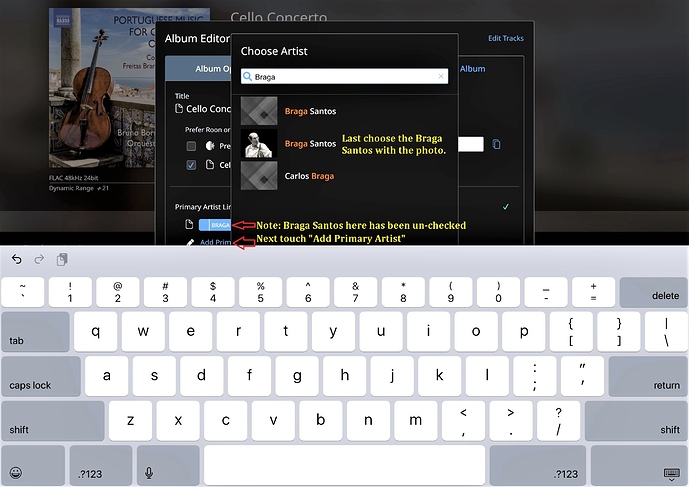