If I search for say Mike Oldfield in Roon I get less than 20 albums including those I own. Plus some random stuff that I have no idea why it gets picked up (Janet Jackson, Hall and Oats!!!). Meanwhile the same search in Qobuz reveals 50 albums by the artist in question. This is happening all the time with any artists. Plus if the search originates on the artist page i get completely different results. I have synced the Qobuz library but no changes. I have found a few threads with this problem that seem to remain unsolved and now are closed.

They are all there. Roon just packages them differently. I have Roon and Qobuz. I see 30 albums for Mike Oldfield. Qobuz has a big long smear of issues listed. Some are albums, some are singles. But probably the biggest distinction comes down to releases/versions.
If you look at QE2 in Qobuz you will see two different albums listed. One has 12 tracks, one has 21 tracks. If you look at the single listing of QE2 in Roon and inspect Versions, you’ll see the two different releases of 12 tracks and 21 tracks.
I also happened to notice Qobuz had two separate releases of Man on the Rocks. There is just one listing for Man on the Rocks in Roon, but with three versions. There are two different releases, and one different version (different resolution) of one of those releases.

Many thanks for the input. I wish I was seeing that. I know what you mean about the versions. But I am missing actual album titles. Not duplicates of other versions in many cases just missing titles. And this is not just Oldfield.

hmmmm. Specifically what album are you missing in Roon that you have in Qobuz?

Actually, I ran into this just today when I searched for albums by an artist. (I have not used Search much at all, so I have no idea whether this would have happened in the past as well). 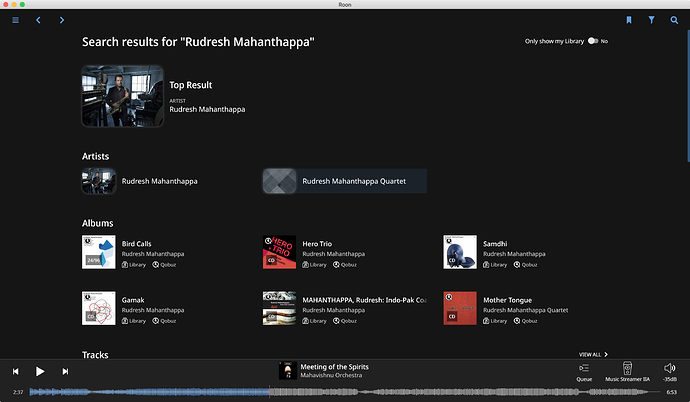 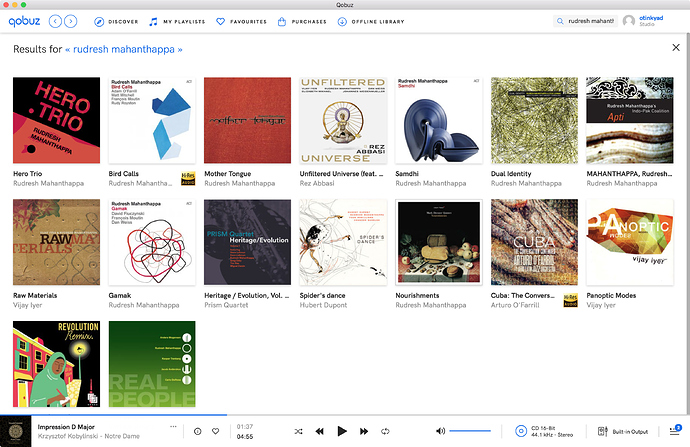 Note that while Qobuz does show some albums where Mahanthappa is not the bandleader, it also does show at least a couple where he is (that aren’t revealed in Roon search).

Any ideas about this would be apprecitaed – thanks!

Thanks for the help. I see how there is a mash up on both sites with different albums, tracks etc showing. Over all there are 22 different titles showing on Roon and 25 on Qobuz. Not too bad but strange never the less.

Yeah, search is a bad way to find all albums for an artist. (Which seems pretty strange as I type it.) If you want the discography, you really need to go to the specific artist to find the albums.
There are also instances where the artist can appear under different but similar names, also spreading out the discography. I’ve usually merged those artists when they are, in fact, the same.
While Roon generally does a good job of herding these things together into something cohesive across local storage and multiple streaming services, there are still quirks. Often it’s a metadata problem that Roon can forward on to their metadata service provider.

Hmmm…might be missing something here. So searching is different to what? Selecting the artist from where? If I go to one of his albums and click his name I get the same result as if I do a search from the normal top bar link. Sorry if I’m being dumb but the Roon interface has me scratching my head several times a day!

If you want the discography, you really need to go to the specific artist to find the albums.

Not sure if I’m misunderstanding what you meant, but in Roon I get the same (limited) results even by going to that artist’s page.

It’s overall not a big deal to me, as I don’t mind searching in other ways (e.g., on web) – but this thread just caught my eye, as I had just noticed this behavior today…

No problem…
If you want to find a specific artist, you type the artist name in search, select the artist that shows up from the search, and then click on that artist. This brings you to the artist page where you can view their albums.
If you search for an album, you find the album listed, click on it and go to the album page.
Same idea for a track.
But the idea behind the search isn’t to list all the albums for an artist when you search for that artist. When you type into the search box, Roon doesn’t know if you want an artist, album or song. So it is just presenting the best matches for the word you entered. So there really is no way it would know you want ALL albums from an artist. The albums that show up on the search results page for an artist name search will be a hodgepodge and incomplete.

I’m probably being more explicit than you want here, but just trying to clarify confusion I may have caused for you.

Just curious – what would you consider a good way to find an artist’s discography – web search? TIA…

In the context of Roon, just going below the artist on the artist page and seeing what is listed for albums/tracks/etc.
In the bigger world (everything they have ever done), I can’t say. I’d use Wikipedia. Sort of lame, but that’s me.

I’d use Wikipedia. Sort of lame, but that’s me.

Well, that is my inclination as well – which is why the limitation isn’t (to me) a huge deal. Thanks!

First off…mahalo for all the great info and time you are giving. Really nice of you. But I have to chuckle at a couple of your comments…

That is kind of funny!

Nothing is perfect I know but I have to say I am disappointed in the general structure and interface presented by Roon. It is not a friendly place for people looking to find new stuff or explore known artists’ other material. Also the way it can throw the most random tracks into a mix is funny sometimes and down right annoying at others.

So there really is no way it would know you want ALL albums from an artist. The albums that show up on the search results page for an artist name search will be a hodgepodge and incomplete.

But it has a link for “View All Albums”. Not sure why this is so difficult to achieve. Its a simple search engine and surely one can narrow or direct it in ways that make it relevant. If not…what’s the point? Random results are pretty useless in a search engine, at least to me!

But knowing this is good, so I can now stop pulling my hair out over this issue and move on to the next one

It is not a friendly place for people looking to find new stuff or explore known artists’ other material.

Hi,
Sorry to re-activate this thread but I’m new to Roon, still in the free try out phase, and I have also found this issue. And I don’t understand it at all!

Specifically if I use the Qobuz app and search for Whitesnake it shows a lot of different titled albums and some versions of the same album. The one I am interested in is called Whitenake (2018 Remaster). It contains 1 CD and 11 tracks.

I have setup my Qobuz account in Roon and Roon can see and play many things in Qobuz.

When I search for Whitesnake in Roon in any of the ways described in the thread above, I cannot see this album. I actually only get shown 3 Whitesnake albums; 2 different ones from my local library and just 1 from Qobuz - an album called Whitesnake 30th Anniversary Collection. This has many of the same tracks but a lot more and on 3 CDs. So it is clearly not the same album.

Roon shows me 3 albums but tells me I am “Focused on 3 of 849”. I don’t believe there are 389 Whitesnake albums so I guess the 389 is referring to the total number of tracks. But I can’t find a way of telling Roon that I want to see all of the albums/tracks.

When I click on the Focus button, the filters for ‘Most Played’, ‘Played in the last…’ and ‘Rating’ are all set to ‘Show All’. Under a heading ‘Album Types’ none of the option boxes are ticked but ‘Main Release’ is underscored in blue.

I’ve tried going into Roon Settings > General and setting ‘Show hidden tracks and albums’ to Yes. It makes no difference.

I can understand why Roon would not want to show you a multitude of different versions of the same album but I cannot understand why it will not tell me about all the different albums that I know are in Qobus???

Update - I just tried searching for ‘Still of the night’ at the top level of Roon. This is one of the tracks on the Whitenake (2018 Remaster) album. Roon showed me the album from Qobuz and I added it to my library. If I now try searching for Whitesnake, Roon now shows me the album, tagged as Qobuz.

So when I search for Whitesnake why is Roon only showing me a very limited subset of the albums available on Qobuz? It is not that they are versions of the same album, I just counted over 20 Whitesnake albums with completely different names.

I’ve noticed the same issue for quite awhile. My solution is to use the Qobuz app for searches if I think Roon search is missing something. Not ideal.

Wondered if these results are different than yours because I didn’t have any whitesnake albums in my library, I added one and redid the search. Same result, except now I have one main library album and 16 qobuz albums, as expected.

Maybe you are confusing search and focus?

Funny this got resurrected today. Yesterday I was looking for one of my favorite artists on Qobuz, Peter Hammill (Van Der Graff Generator). I found 42 albums (no duplicate versions, singles etc) on that site but a search on Roon only revealed only 23! If I then search for actual titles on Roon that were missing from the artist name search I get nothing. Tried multiple spellings, titles etc. Nothing. I can not find one of these missing albums. I just don’t get it and I find it really annoying that Roon is restricting my ability to access all the available Qobuz albums by a performer.