I am new to Roon and enjoying it and want to stick with it. I found this discussion because composer view was not showing me albums but, as another poster commented lots of allegros and adagio etc! So yes please group by albums in composers view. This is what I expected and what I get from eg Minimserver on my NAS. I want to see every album in my collection with a composer as main composer or composer of some of the tracks then you can drill down.

Has anything been done on this? I would rather just click on the Composer and have the albums listed like you would for an Artist. This definitely needs to be an option. Having the works listed track by track is just a complete pain and counter-intuitive most of the time. Music lovers work by Abums 99% of the time!

I know we can achieve this by filters but I’m sorry but that is not the way we should have to go!!

Good morning,
I am new to Roon and, so far, impressed. The only feature (and, for me, an important one) I see missing is the ability to list the albums by a composer. I am adding to the current conversation in the hope that Roon will add the feature. Using the “Focus” method described above is adequate but cumbersome.
Thanks in advance,
Frank Angelini

So how would you do this without creating an unholy mess? Many albums have a different composer for each song. If you listed them by composer you’d have, perhaps, one album listed for the composer but with only one song, and you’d have to open the album to find the relevant song. AND, you’d have 10-12 different instances of the album showing for each of the composers.

edit: I suppose it might help to have the Only Classical toggle like there is now for Composer view. This seems to me to be a very “Classical-centric” view that would be ugly for other genres.

Suggestion- Genres > Classical > View all albums > Sort by album title and add a bookmark. Most single composer classical albums have the composer’s surname as the first word if the album title. Sorted.

Focus or filter by composer to find the albums. Compilations will appear in the middle of it all if course - but that seems as logical as any other way if doing it.

So how would you do this without creating an unholy mess? Many albums have a different composer for each song. If you listed them by composer you’d have, perhaps, one album listed for the composer but with only one song, and you’d have to open the album to find the relevant song. AND, you’d have 10-12 different instances of the album showing for each of the composers.

You need to get your head around the possibility that people are different and have diverse needs. There is very little argument that someone who enjoys classical music would like a view of albums by composer. Accept that. You don’t have to use it. A dance music fan might want a view by BPM. Accept that. You don’t have to use it. A bass player might want a view by bass player. Live with that. People should be able to have whatever views suit them. Nobody needs to see a view that they don’t want. Software. The clue is in the name. Soft ware. It should be soft. Each to his own. Our music has many tags. No reason why decent software shouldn’t offer the possibility of any view you can imagine based on those tags.

It exists already. See my post above… Bookmarking means you only have to do it once 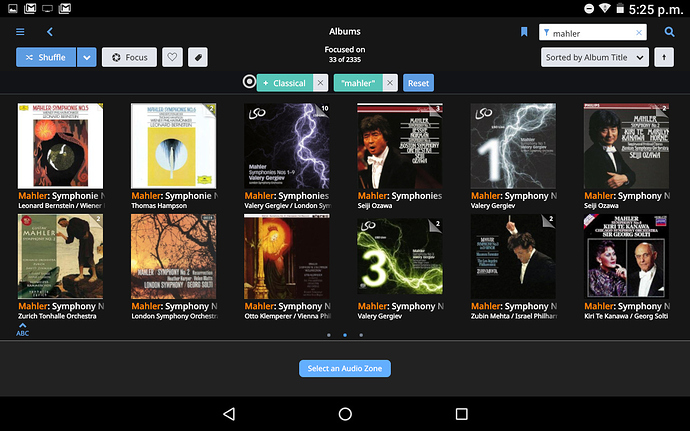 This function only interests me for classical music. Over the years I’ve edited metadata on my classical recordings so that compositions (a piano sonata, for example) are regarded as “albums.” If I rip a CD with three separate piano sonatas, each of which has three tracks, that CD will be split into three albums when I edit the metadata. It its current form, Roon lists all of the tracks associated with a composer. This is not how most “classical people” listen to their music.
By the way, listing albums associated with a composer is possible on iTunes and the BluOS controller.

If I rip a CD with three separate piano sonatas, each of which has three tracks, that CD will be split into three albums when I edit the metadata.

If that’s what you are doing, then it’s hardly surprising that Roon is not able to deal with it. Roon’s object model deals with albums as releases, not as you have defined them. Using this object model, Roon lists compositions (not tracks) associated with a composer. 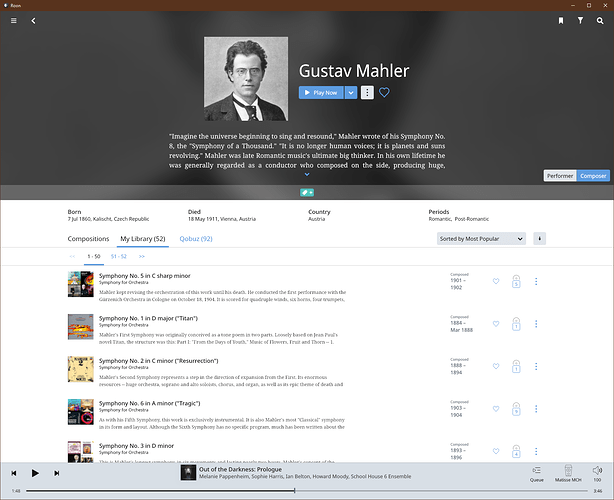 Agreed I had done the same thing on the few classic CDs I had and undid that for Roon since they were unrecognized.

However he does make a good point that the composition listing by track makes no sense at all. I get 50+ listings of each individual aria for Handels Messiah. That makes no sense. The should at least be some option to group this by composition. Is that available am I missing it?

Thanks for the stimulating conversation. It is possible to list albums by composer (even with the metadata tweaks I’ve mentioned) but doing so is surprisingly cumbersome in Roon. In the first screen shot, you see that “standard” display of compositions when I navigate to composer Elgar. There is a list of tracks. 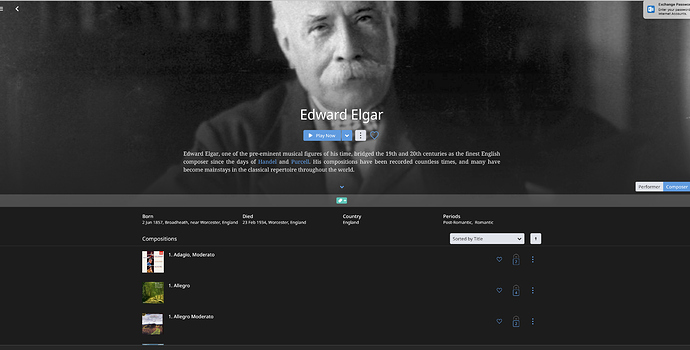 In the second screen shot, you see what results when I got to “Library,” “Albums,” “Focus,” “Composer,” then select Elgar. This is exactly the sort of listing I want. I just wish I could get such a listing of Albums right from the Composer page. 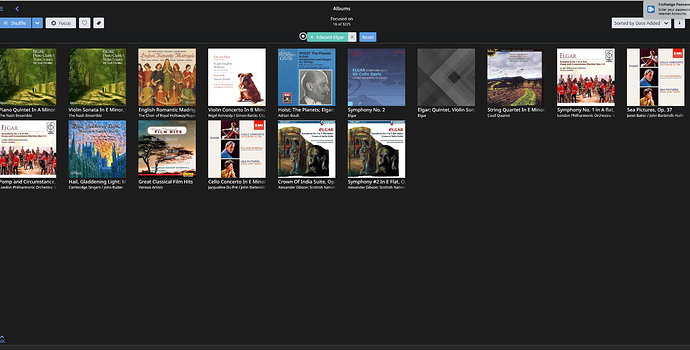 However he does make a good point that the composition listing by track makes no sense at all. I get 50+ listings of each individual aria for Handels Messiah. That makes no sense. The should at least be some option to group this by composition.

It has been asked for, but as pointed out in the request thread, it’s probably a difficult nut for Roon Labs to crack.

Would it be possible to include a kind of flag to indicate whether a recording of a given work is “complete” as opposed to only contain excerpts? And being able to display those two kinds differently on the composition page? I am finding it sometimes difficult to navigate through lists for operas or oratorios where I have multiple versions of complete recordings but also lots of single tracks from compilations.

There seems to be a lot of noise on the composer page - if I go to Richard Wagner and sort by composition title, the first three items on the list are tracks from the Deryck Cooke Introduction to the Ring. Sorting by composition date or popularity brings the complete operas to the front of the list and is more useful.

As an example, Schubert could be especially problematic for a big Lieder collector as many of the songs would have individual entries - and there are a few of them, you might say.

No ideas here, but I guess an album view from here, where albums featuring this composer could be viewed, sorted and further filtered or focussed would be useful. (I do think this is kind of already available from the albums view already - but I’ve said that before.)

Also useful - if your albums are identified and /or the tracks within grouped successfully as compositions then this Composition view already works (even with the “noise” I’ve mentioned).

It has been asked for, but as pointed out in the request thread, it’s probably a difficult nut for Roon Labs to crack.

Such things should actually be trivial for any vaguely well designed database. If it is truly “a difficult nut for Roon to crack” that would suggest a fundamental weakness in their data model.

It’s getting the correct identification of what the object is (are these tracks a composition or extracts) that’s the issue I would think, not so much the design of the database itself. It’s the old GIGO thing.

But if the album metadata has been broken or overwritten…it might be too much to expect Roon to piece things back together based solely on the text in the tags fields.

Where there’s a will, indeed.
And it might not be too far of a gap for Roon to bridge. I noticed that, when selecting a track associated with a composer, the album of which it’s a part is indicated. Click on the album name, and you are directed to the album.

Here’s the page for Messiaen: 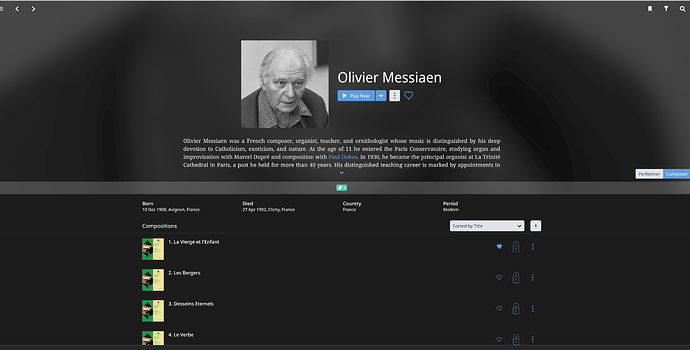 I scroll down to the track “Cedar Breaks Et Le Don De Crainte.” 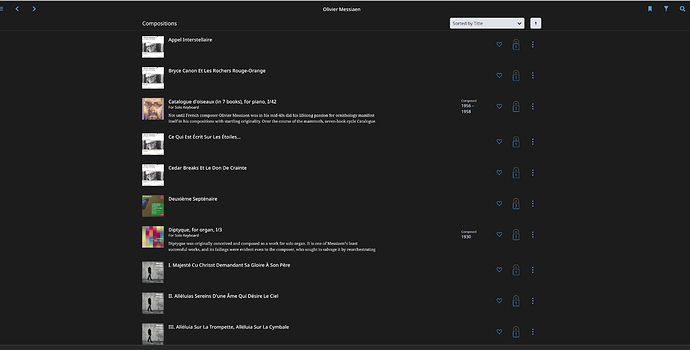 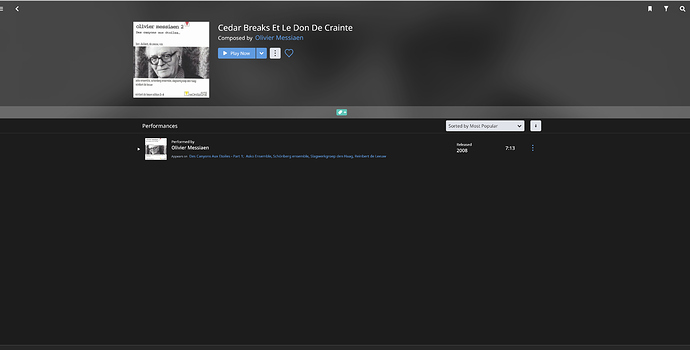 Click on the album name, and I am brought to the full album. 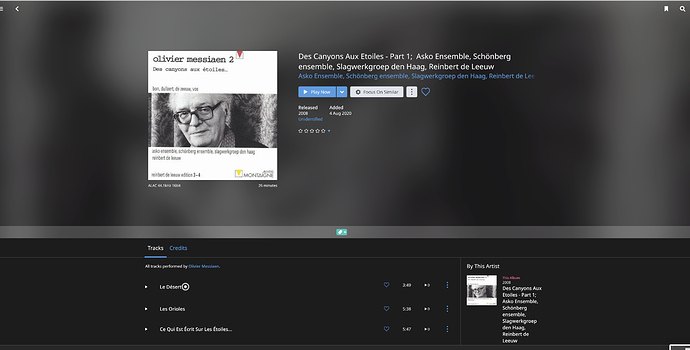 If only Roon could bridge this gap!

Its something to do with skinning cats

Album by Composer from a Classical view point is not an excessive request.

Yes you can Focus then Bookmark but then you get a mess of Bookmarks to manage which is equally messy.

Using Roon is like any other software , it does it its own way and you either work around it, request a feature or give up. I personally keep JRiver up to date as I can define what I see on the screen and find it infinitely better than Roon for navigation

I used to choose by

Now I have “been trained” to …

Neither are perfect , Composition is good my cluttered (my library has the DG Boxes for complete works of Bach, Beethoven, Mozart, Brahms and Chopin hence Composition shows 1300 Bach compositions )

Don’t get me started on Box Sets (I gave up and use JRiver where I can control the view). This is a MAJOR shortfall for any Classical (and Jazz I believe) Collector. It is still the cheapest way to collect recordings

Roon and JRiver do 2 very different jobs so I use BOTH , depending on what I am doing.