Yes, I think you’re right - I’ve moved it into the Roon Software category. Zenit has been alerted, so he can pick it up there.

I tried something more modern. I have lots of performance tracks of various Great American Songbook compositions, so I tried “Kern”, thinking of Jerome Kern. Nothing. “Berlin” gives me the Berlin Philharmonic, though Irving Berlin does show up in the composers section. “Bernstein” returns Leonard, and “Sondheim” returns Stephen. “Rodgers”, though, does not return Richard; instead, I get Nile Rodgers, who I never heard of and didn’t think I had any of. In fact, when I looked, I have one Nile Rodgers track in my library, compared to dozens of performances (how does one count them?) of songs composed by Richard Rodgers, the first EGOT winner.

This was a problem in the beta trial iirc. For example a search for Schubert returned Beethoven: 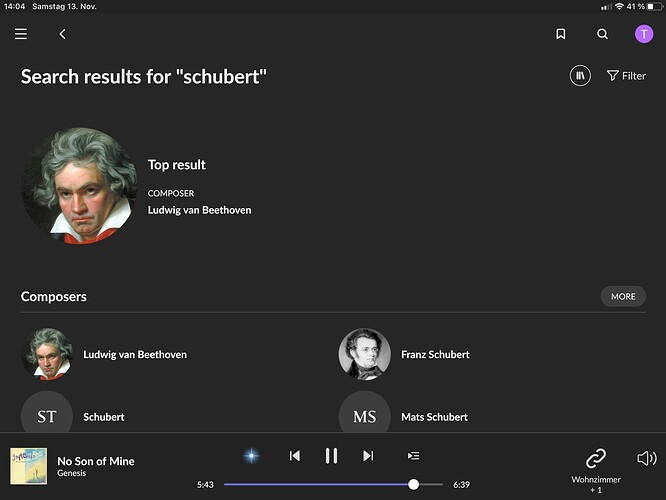 and I got Bach when I searched for Vivaldi: 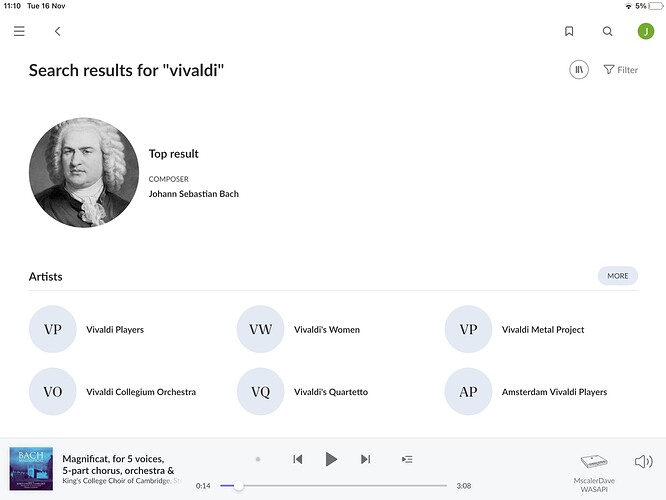 But those two got sorted.

Yes, both “Vivaldi” and “Bach” return the composer as expected. As does Beethoven and a few others.

However, both “Brahms” and “Tchaikovsky” return compositions, their respective Violin Concertos in D major. In fact, all the Russians return compositions: Stravinsky the “Rite of Sprint”, Mussorgsky “Pictures at an Exhibition”, Rimsky-Korsakov “Le Coq d’Or” (somewhat puzzling, that).

For “Borodin”, I get “Prince Igor”, for Wagner, “Götterdämmerung”.

I agree, there is still inconsistency when searching for a composer by surname. Sometime I get the composer as the top result, other times a work by that composer. Sometimes the work is not very representative: 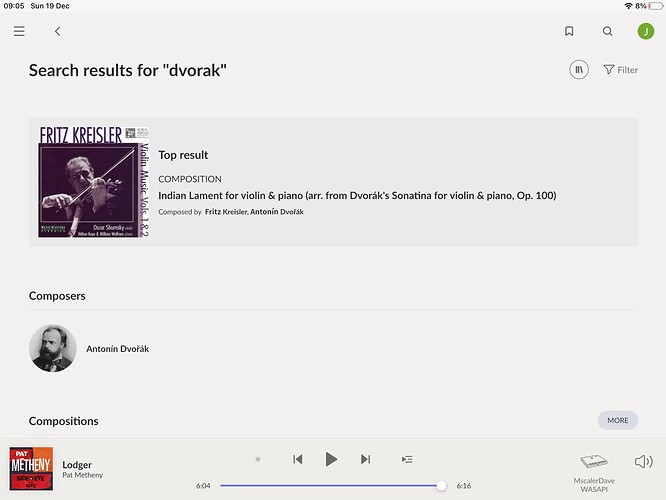 But the search is generally a lot closer to what I would expect.

Could these inconsistencies be down to popularity or Roons supposed concept of this from it’s small user base? This popularity then seems to override the logical choices of what it should find in your local library so you get Nile Rodgers over Richard Rodgers as more Roon users likely search for it. Roons small user base is swaying choices one way or another. For a bigger user base this system might work better but 250000 isn’t very many at all if you ask me.

Maybe, dunno. To me that’s a different issue - how much the search should be biased to towards my own library. I am quite happy that it is more general, as I am often using it to find things I haven’t got, and it was a really annoying failing of the earlier algorithm to prioritise poor matches in my own library over perfect matches from outside it. I can always use the library icon to narrow the albums search result down to my stuff if I want it to. I can see an argument for putting a library icon next to the search box so that you could restrict the search before it was executed rather than after. But in any case the result for Dvorak should be better. I’d just expect the composer, or at least a work. But an arrangement by somebody else as the top choice? Hmmm. But I am sure these things will get fixed; the whole thing is so much better now.

Agreed its better overall and I have not had any issues myself with finding anything. Just trying to give a reason for it’d often quirky logic choices.

Sometime I get the composer as the top result, other times a work by that composer.

The one time I got a work over a composer was with Ysaÿe, whom I have both as a performer and a composer, something that’s naturally less common for classical than it is for pop, and that’s fine, especially given that the metadata for the first hit mistakenly identifies Ysaÿe as the performer (and Ysaÿe-the-composer appears to be seen as a different individual than Ysaye-the-performer, whose umlaut got compressed out of the way). 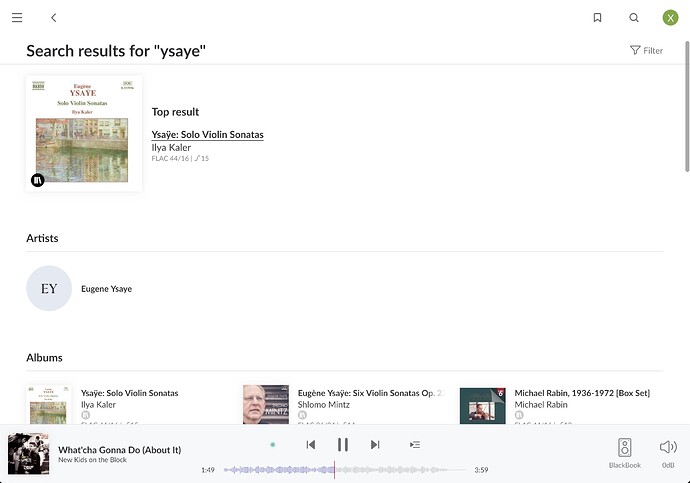 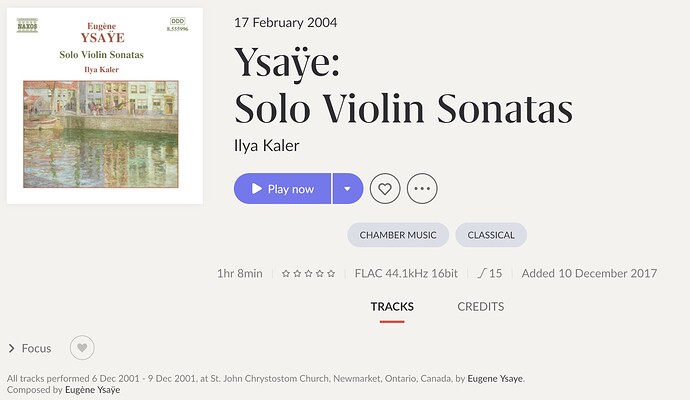 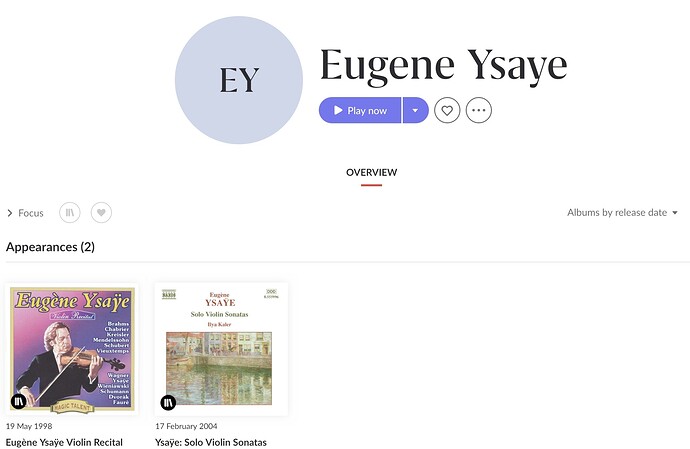 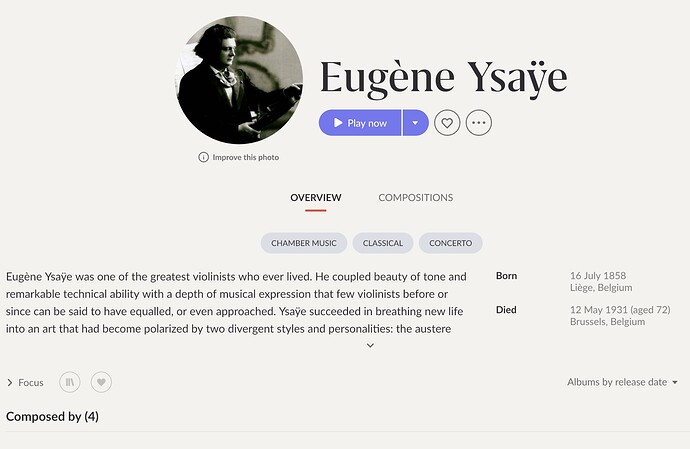 Until the 880 build, search and the local library were using an outdated / low quality set of aliases for artists. This data is relatively long-lived on a machine. Users who have never had Mozart in their library, or just freshly installed roon shouldn’t see Mozart if they enter “vivaldi”, for others it might take a few more days until the metadata is updated locally. I’m not 100% sure how long this is right now, but I’ll leave this topic open for now.

“Rodgers”, though, does not return Richard; instead, I get Nile Rodgers, who I never heard of and didn’t think I had any of. In fact, when I looked, I have one Nile Rodgers track in my library, compared to dozens of performances (how does one count them?) of songs composed by Richard Rodgers, the first EGOT winner. 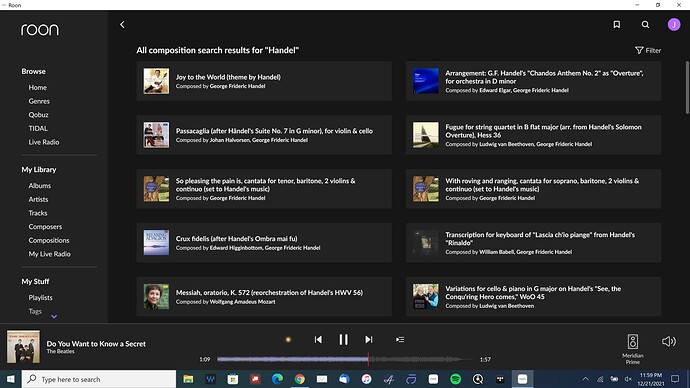 for others it might take a few more days until the metadata is updated locally. I’m not 100% sure how long this is right now, but I’ll leave this topic open for now.

OK. I just checked; in my system, searching for “Handel” still returns Mozart as the top hit. How will we know when we should start trusting the results of search? Will a green light go on, or some such thing?

Just checked this search with b884: still returning Mozart as top hit when searching on “Handel”.

Your cache hadn’t refreshed I think

Returns Handel for me to. I have tracks by Mozart and Handel in my library 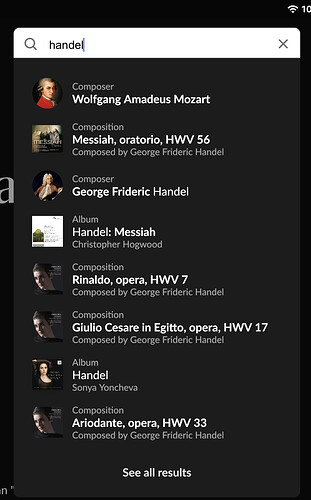 Shot in the dark, but here goes:

For those whose search on Handel turns up Mozart as composer first, do you by any chance have in your library a recording of Mozart’s German-language version of Messiah (K. 572)?

Ah! Interesting question. How will I find out? Use Roon Search?

I did look, and the answer is no.

Your cache hadn’t refreshed I think

Worth a try! I can’t think of another reason why these two should otherwise be confused…

I have two versions of the Messiah in my library, but not that one. Both are the Handel