Can we talk about search? I thought I’d try the new stuff (I have to admit I did a spit-take when I read Brian’s note “so we decided to write our own search engine”) and be amazed by the improvements. It being Messiah sing-along time in this neck of the woods, I typed in “Handel”. The top result is “Wolfgang Amadeus Mozart”. Is that what everyone would expect?

I typed in “Handel”. The top result is “Wolfgang Amadeus Mozart”. Is that what everyone would expect? 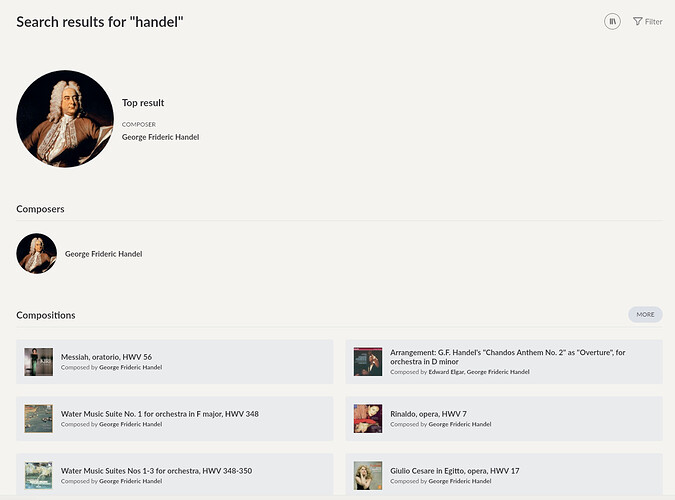 I got Handel as well:

I have my local library and Qobuz.

Merging results from two different search engines is quite difficult, and almost never a good idea, whatever the founders of Roon may think. That’s why most systems that combine multiple search engines show the results of each separately.

Merging results from two different search engines is quite difficult, and almost never a good idea, whatever the founders of Roon may think. 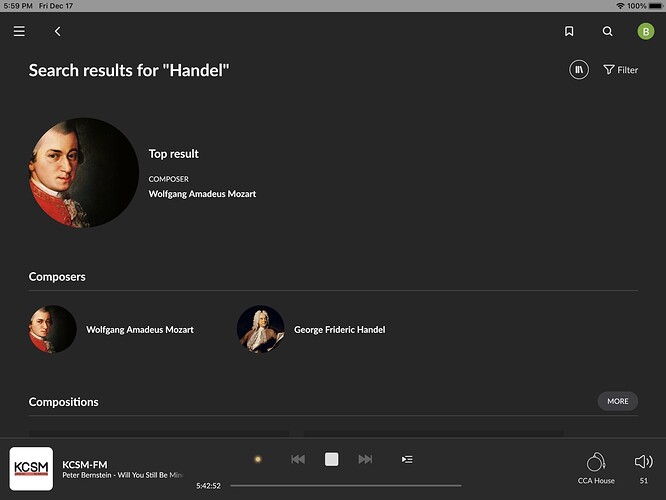 That is so odd!

I thought perhaps some classicist in the forum might have a hypothesis about it.

Search that doesn’t work is a primary cause of dyspepsia!

Further down on your search results, do you actually see albums by Qobuz? Or may there be a problem with search access to Qobuz and you get only local results? It occurred to me as on another thread someone had right now problems starting playback of a Qobuz album. I use Tidal btw…

do you actually see albums by Qobuz?

Yes, I see 6 Qobuz albums under the “Albums” results, all of which have “Handel” in the name of the album. No Mozart albums. None of my local Handel albums.

If I look at “All Albums”, all of my local library albums are at the very bottom of the results list.

This is odd. Would you care to start a new thread with your curious search result and bring this to the attention of @zenit? Or maybe a Moderator would be so kind and split all these last posts into a new thread…

I don’t know. I’ve worked a lot with various search engines, and in the indexing of structured text objects, and it’s really really hard to get it right. As in, impossible. Because “right” keeps shifting. The best search systems use a great deal of linguistic analysis and maintain a contextual model of each individual user, shifting their weightings continuously as the user does additional things. That’s hard to build. I appreciate the whole “nothing would ever be done if not for someone who doesn’t know it’s impossible” schtick, but if you’re going to hire a single “search engine expert” to get it done, it had better be one of about five very specific people.

But I’d think a search for Handel would always return Georg Friederich Händel. I suppose the umlaut is what’s screwing it up.

But I’d think a search for Handel would always return Georg Friederich Händel. I suppose the umlaut is what’s screwing it up.

This in fact has been acknowledged. Umlaute at this moment are not being handled well. But you searched for ‘Handel’, not ‘Händel’, and your results should be similar to what others and myself are seeing.

Searching on this returns a recording of “Agrippina” as the top result.

your results should be similar to what others and myself are seeing.

This is where the bad idea of merging results from two completely different search engines comes in. You and I have different local libraries; you use Tidal, I use Qobuz. Do you, for instance, have lots of Infamous Stringdusters albums in your local library? I do. Doubt that contributes to this particular confusion, but it all matters somewhere.

A search for ‘Handel’ should always bring up the composer as top result, independent from what is or is not in the local library. The returned albums and compositions may be different, but the most relevant result is the composer himself.

And now, after thoroughly derailing this feedback thread, I better shut up in the hope that some good soul will split this side-discussion out into a new thread…

It occurs to me that if it’s a new search engine, there must be a re-indexing going on. Maybe it’s just at an inconsistent state if it hasn’t already completed.

Guys, as @Andreas_Philipp1 suggested, I’ve moved these posts on search from the general B880 feedback thread to their own topic for @zenit to take a look at…

Geoff, I’m not sure this needs to be in Support. More of an oddity; I’ve never depended on Roon’s search to work.

I tried again this morning; still Mozart (as composer) as the top hit.