Search is broken, it is indefensible

I take serious umbrage with basic features not working on a basic level with software that I spend a small fortune on.

I just spent ten minutes trying to find an album called “Love Train” because apparently typing the exact name of the title into the search bar is not good enough for this software. Not only does the album not appear as the first result, as it should, it doesn’t appear at all in the results. That is absolutely insane to me on free software, let alone paid software.

You do not need a complicated algorithm to match exact search terms and I simply cannot fathom why this is an issue at any stage, yet alone years into development of a paid product. I should be able to find an album if I remember what it is called, even if I can’t remember the name of the artist.

Sorry for the rant, but I am really pi**ed off that I spend (what is for me a lot of money) on this software, the only software I actively pay for, because I want to support the company - and I can’t even get something as basic as this working properly.

As always (or should I say ‘still’), the best way to find something in Roon is to already know that it exists and it’s complete name.

I looked for Steve Reich’s Drumming. I tried searching Reich and Drumming. I knew I had a local copy.

There were two problems. The title has a colon after Reich and the Qobuz copy hides the local copy when searching on ‘Drumming’.

Not trying to defend Roon but being of the impression that search has greatly improved lately I tried this and got a few albums with this title, albeit amongst some others not exactly matching the title… I take it that the particular one you search for was not amongst them.

As there are apparently many albums with this title I hope someone from the Roon experts team sees this; a simple remedy might be that a search resulting in -say- more than 10 exact matches should only show the exact matches and ignore the “imperfect” matches suggested by the search fuzzy logic

You do not need a complicated algorithm

It would appear that a complicated algorithm is required as Roon are aware of problems with the search facility & have employed a specialist (Zenit_Kovacevic) to fix the issues we are experiencing.

There is a thread (see below) which gives details of proposals and progress so far, but, if the search algorithm was “straight forward” I guess we wouldn’t have problems.

There’s loads of love train albums, which one were you expecting?
Personally I’d have expected The O’Jays track to be first.

Not only does the album not appear as the first result, as it should

Why should it be first? It should appear in the results of course.

All this hyperbole is just that… hyperbole and venting of frustration. In my experience Roon’s search has greatly improved with release 880. It’s not perfect, but Roon’s staff have several times stated that they are working on making it even better.

As to album search, I find the best way is to look up an artist and then find the album in the Discography tab. Works for me every time, even and especially with classical music.

Perhaps because I have no other albums called Love Train? I have one album called that, I searched that exact phrase, it should appear.

11 posts were split to a new topic: Searching for Reich’s Drumming

Yes it should appear.

Are you suggesting that search should prioritise your library before matches found on streaming services?

I can see an argument for this. But you will find plenty of posts on the forum from people trying to find new music with Roon search (from TIDAL/Qobuz), and also complaining the expected result is missing or not the first hit.

I dont see how it can work both ways really. At least not without more controls to limit the search scope etc.

can you be specific about which “Love Train” you are trying to find?

You say “i have one album called that”…

Is it a Tidal/Qobuz release that’s in your library? Is it a local file?

There is nothing hyperbolic about expecting search to find exact terms. It’s an extremely basic expectation that all music software has been able to do for years.

If iTunes, MusicBee, Foobar, etc etc have it working just fine for over a decade, why is it impossible for $100/pa software to implement it?

I’m not asking for it to understand “disco train album” and find it, but an EXACT term? I mean come on. It’s literally the simplest possible way to use search.

Searching for ‘Love Train’ I see quite a lot albums being returned. You still have not made clear what exactly you are searching for. You’re nor being precise, and it seems that you don’t wish being helped nor being proved wrong. You’re venting frustration and as far as that, it’s ok with me.

I don’t know how I can be any clearer with Roon, or with you.

and does the search find other local files?

who’s the artist? (what specific album?)

I just spent ten minutes trying to find an album called “Love Train” because apparently typing the exact name of the title into the search bar is not good enough for this software. Not only does the album not appear as the first result, as it should, it doesn’t appear at all in the results.

I just tried it. Got 30+ results under albums. (I use Tidal if it matters.)

@ultrafud
It has been asked several times of you just what you are looking for.
Love train, yes but who is the artist?

Also could you post a screenshot of your search results when typing in love train and hitting enter for search, not just the auto fill results.

As an aside you can also filter the Album page, in addition to scrolling alphabetically.

I don’t really understand why the artist matters. For the record, I couldn’t remember the artist name, which was why I find this so egregious. It is completely reasonable to forget the name of a band, but still remember an album name. Searching for that exact album name should return the album in the results. 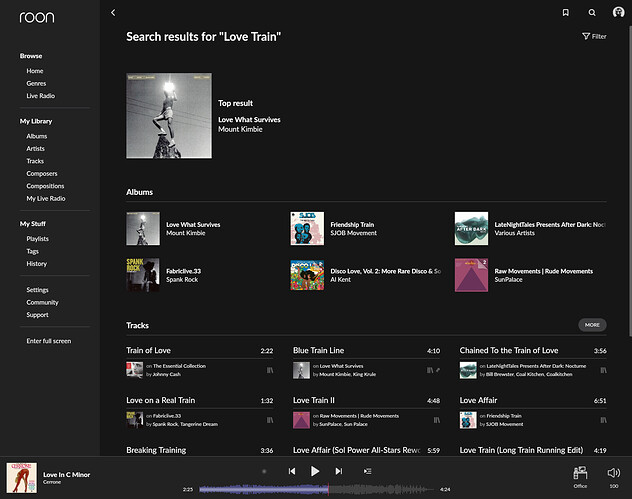 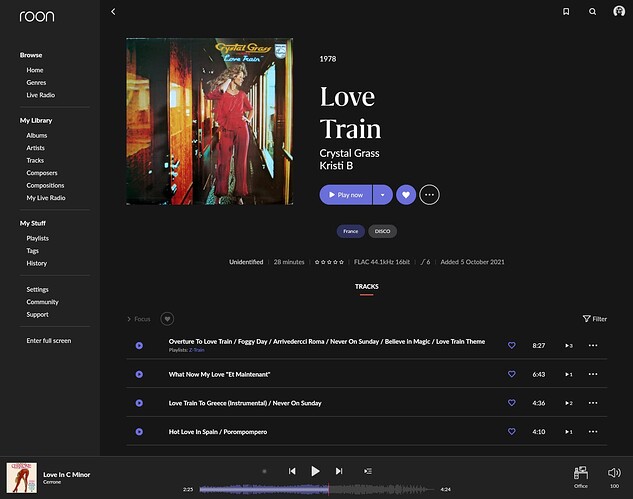