Searching for compositions: Is there something about the new Search that's still not quite right?

I’m having a problem with searching for, recognizing, and merging different renditions of the same composition that the build 401 update of 1.6 did not fix.

I have two different renditions of the traditional tune “Shenandoah” in my collection. The titles of the two tracks are as shown in the attached screenshot. They’re embellished, but they’re both “Shenandoah”. The composer credited in the file tags is “Traditional” in both. As the captured screenshot shows, when I search in the “Compositions” window on “Shenandoah”, I’m shown two tracks, but only one composition. and can’t merge the compositions because only one is shown. Why is that? Is there something about the new “Search” that’s still not quite right?

I know of two similar instances of this kind of thing in my own database, but am submitting this example as an illustration because it’s the simplest of the three. I can supply details on the others if it’s useful. 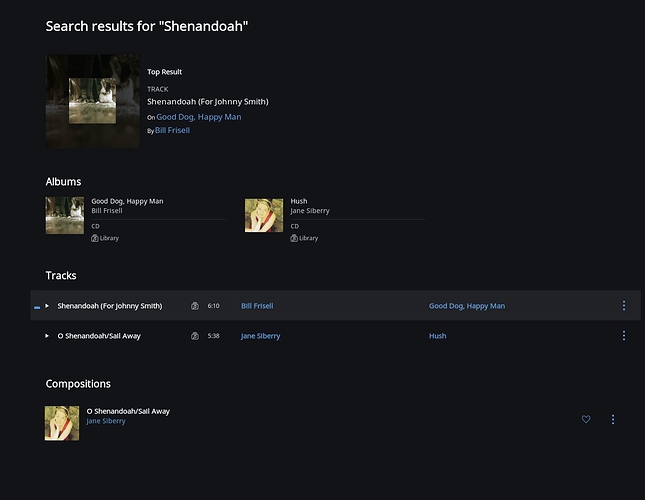 You could try editing the track to add a composer (see KB link). That may work.

Edit. Sorry - went down wrong route. I added the album via tidal and noted that the problem is that the Bill Frisell track, although it has a composer (traditional), it is not being recognised as a composition. Other tracks ln the album are OK.
The track should be, so I wonder if @joel can help (although it may be related to a longstanding bug)?

Thanks for your efforts. re: Frisell track not being recognized as a composition: yes, that’s the problem.

I surmise that your albums have been identified by Roon and are using metadata derived from Roon’s database. I see they are your albums and I don’t know how much of your own tagging you have done, but if extensive you might try telling Roon to use your tags rather than Roon’s. The bug I was alluding to appears when Roon’s metadata is at fault in some way.

Thanks for the suggestion, but that’s another source of frustration: you can force Roon to use the file tags for a lot of things, but not for “Composer”. Go figure.

I will have a go, though at forcing Roon to use the file tags for these albums and see if that results in any change in behavior.

A nuclear option is to start the identify process for the album, and say no to all suggestions; it will end up using only your tags.

Thanks for the suggestion. I’ll keep it in mind, but will hold off on going nuclear until I’ve heard what Roon support has to say about the issue.

My suggestion would only affect that one file; it causes it to end up with no Roon metadata whatsoever. You can always run identify again to revert. Nevertheless if you have any concerns remember - backups are your friend.

I had flagged Joel above, but anyway, let’s flag @support explicitly for you.

Thanks. I had thought that just creating a note in the “Support” category would do that, but I appreciate you giving it the extra nudge.

Can you share screenshots of the albums that these tracks belong to?

Screenshots attached. (iIf they look a bit odd it’s because each is actually two screens, scrolled, cropped & stitched together, to get the entire album listing into one image). 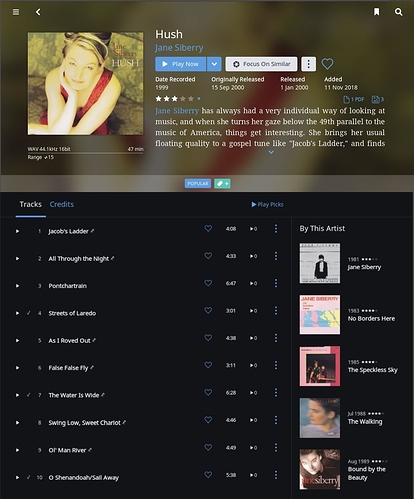 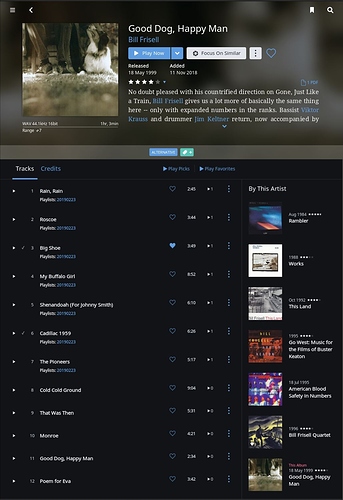 We are looking into the data coming from our metadata providers and will be sure to update you when we have more info. Thanks!

Thanks @dylan. In the meantime, given that the basic problem here is that Roon is failing to recognize a composition as such, I’d be grateful if you could address a few general questions:

How is this problem dependent on metadata? What criteria need to be met for Roon to recognize that a track is a composition? In particular, does “genre” play a role? (I don’t do a lot of unusual metadata manipulation in Roon, but I do force it to use my own limited set of 10-15 “genres” on import.)

I would imagine that the basic algorithm is pretty simple, namely: if a track is not known to be a part of a larger composition – as determined either by metadata and|or by a WORK tag --, then the track is a composition. There are going to be exceptions, of course, e.g. recordings of stand-up comedy, but my intuitive sense is that th exceptions are far outnumbered by the rule.

My questions are motivated in particular by the fact that now that I’ve started noticing them, there are a LOT of such cases in my database. Screenshots to illustrate another are attached: 1) Search results for “boardwalk” showing three different recordings of “Under the Boardwalk” and 2) and expansion of the Roon “Under the Boardwalk” composition entry, showing only two of those tracks. I’d hate to think that all of the cases are all individual bugs. 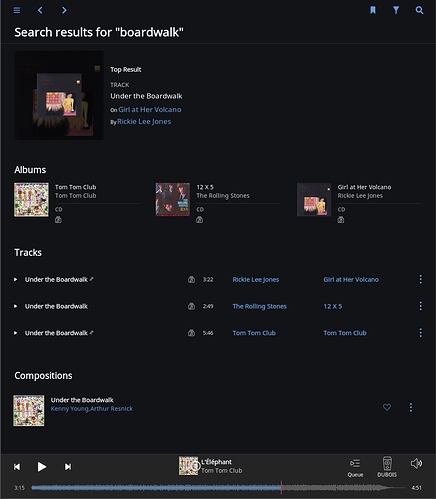 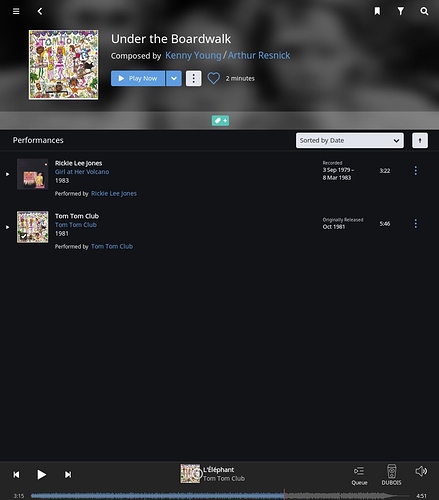 I looked at our data here and discussed with the team.

What criteria need to be met for Roon to recognize that a track is a composition?

I’d like to point you to this thread where this is discussed a bit. Generally, if a track has a composer, it is considered a composition by Roon. There are other exceptions and rules in place, but generally, that will be the case.

One of these rules is that we do not create compositions from the Traditional composer.

In the example you shared, the Hush album has a secondary composer, which is why it is showing as a composition. The Good Dog album does not.

@dylan: Thanks, that should help a lot with getting my database under control. Exploiting the WORK tag in order to force Roon into recognition of a composition as such was the clue I needed. (Wouldn’t this be a good item to have in a FAQ somewhere?)

One of these rules is that we do not create compositions from the Traditional composer. 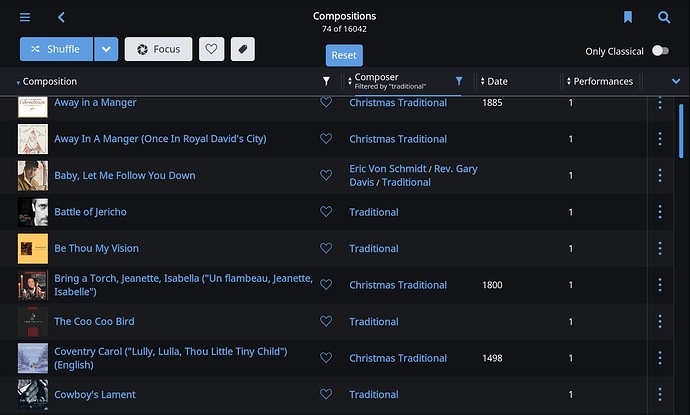 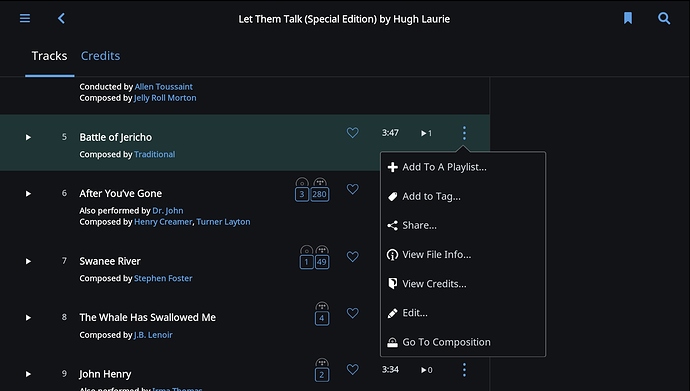 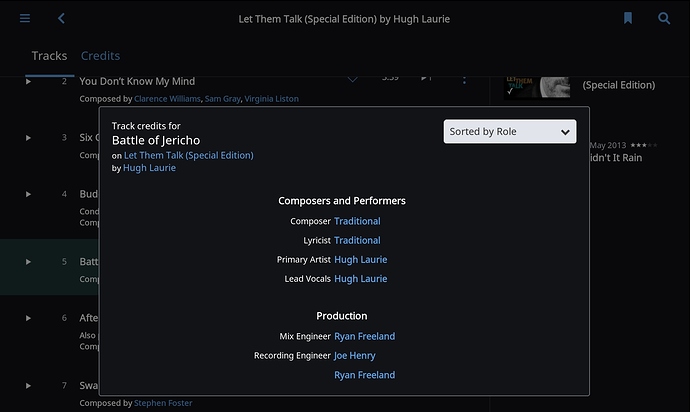 Thanks @BrianW. You beat me to that one.