I just tried this with Track Artist, which is for classical and/or me personally the most important tag for which there could be multiples. And it’s a tag for which there are often multiple entries coming from Rovi, so I figured Roon “support multiple values” in that field.

@brian Have I misunderstood this, or does it not work as designed?

The handling of track artist is a little bit more complicated and legacy-ridden because we were trying to avoid disruption to some pre-existing behavior. Please enter a ticket in redmine–we need to make some riskier changes to album/track artist handling (they are unfortunately intertwined) in order to fix this.

Representing multiple performers in a track artist field (especially on FLAC) is pretty evil–it is much better to use multiple PERFORMER tags for that use case. If you’re editing now, definitely do it right!

I’m a bit confused about which tag is which and which tag format I should be using (I need to research all this - tag formats, standard sets, etc), but I’ve found PERFORMER in Metadatics (not obvious, but it’s there). I’ve changed it to include both names and a semicolon between (no space), and my track metadata has two links for the two names. This is great! Big result for me, bearing in mind I have max 60% identification even after grooming. Thanks @brian!

However, with Track Artist and Album Artist blank, Roon is given the Album Artist as the Performer string, including semicolon and as only one link. See screen shot. Is this expected? What should I ideally do to get the two names there as two links also?

I’ll look into replacing the semicolon with two tags, one per name.

See also https://dev.roonlabs.com/portal/issues/12934 for media and a small bug. 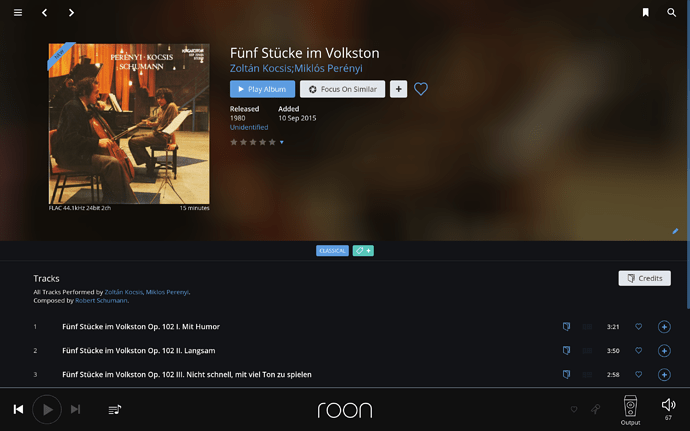