Server Sleep and Wake on LAN

The whole point is user (and family) friendliness and not have to use two apps to start the music listening session.

Ok… So I am still struggling… I think what Roonie described above is exact features that I want to see from Roon.

For me… I am using NUC dedicated to run Roon Server “headless”, and leaves the computer on 24/7 (but using computer sleep function to save energy), controlling Roon with Ipad Mini2.

So… it is technically possible, but inconvenient, what Roon can do, is redirect to this “re-connecting” page rather quickly, if it can’t seem to find the server in like 2 seconds… Let user click on that connect button, with last connected IP address, to wake up sleeping computer.

I think Ronny just replied in another similar thread that “computer going into sleep during music playing” is resolved and ready to be implemented on next build. Great!

"Second, it needs to add the ability to wake the primary computer from a low-power sleep state. As it stands, the company recommends leaving the computer powered up 24/7 or using a third-party wake-on-LAN utility on a tablet or smartphone. That’s lame. I shouldn’t have to waste electricity running an unused computer all day long, and I shouldn’t have to use third-party software on a secondary device to wake my PC from hibernation."

Couldn’t agree more. Also when it wakes the computer, the server should be fully functional. In my experience, that’s not the case at present for RoonServer on a PC. Please fix this.

@Cliff +1
This was discussed quite a while ago - but also in the context of headless servers / Roon running on a NAS etc.
I’m of the same opinion : I really don’t want my PC on all the time for many reasons and I don’t actually even (personally) want the WOL option, although it would be better than nothing.

As it stands, the company recommends

I don’t think the company has officially endorsed any course of action. The devs have asked previously in the thread for suggestions of functionality and then responded with the issues associated with the differing solutions. And have not said much further about it, as far as I know. If so, please provide a link.

It’s Michael Brown’s quote, not mine.

7 posts were split to a new topic: Crash with RoonServer – not restarting

Title pretty much says it all. So far I haven’t had success with this.

Waking a ‘sleeping’ server involves Wake-on-LAN: sending a ‘magic packet’ directly to the server. While it would be a nice touch adding WOL functionality to Roon, I can see all sorts of support nightmares.

It is, however, quite easy to accomplish on OS X, by building a small Automator workflow/application: 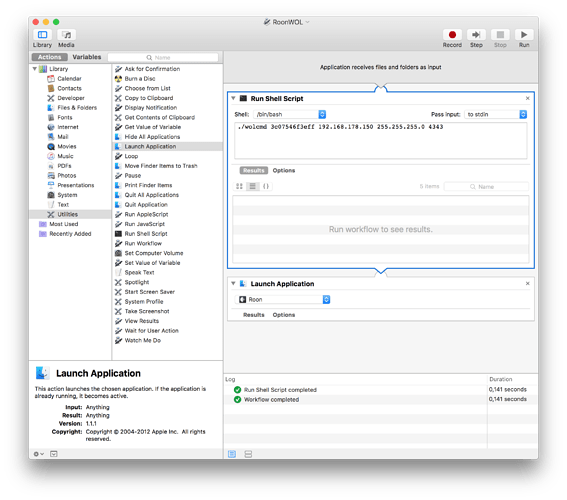 Depending on the time it takes your server to fully wake up, you may want to insert a waiting cycle between running wolcmd and starting Roon.

You can download wolcmd here: http://www.depicus.com/wake-on-lan/wake-on-lan-for-apple-mac (download the command line utility at the bottom of the page). It’s a small app that you can copy to your home folder. The correct syntax is:

Save your workflow as application in Automator and run it instead of running Roon app directly.

On iOS it is just as easy to accomplish something similar using Workflow.app and one of the many WOL utilities in the App Store.

adding WOL functionality to Roon, I can see all sorts of support nightmares

Why? It would simply involve building into the Roon, the capacity to send a magic packet to a defined MAC or ip address. I have Squeezebox control apps with exactly that funtionality and zero issues.

Merging this with a previous discussion of the feature request guys.

Waking a ‘sleeping’ server involves Wake-on-LAN: sending a ‘magic packet’ directly to the server. While it would be a nice touch adding WOL functionality to Roon, I can see all sorts of support nightmares.

I think the way to look at this issue is from the user perspective. If I’m running Roon, I should just be able to access the server as needed, and should not be forced to think about whether it’s sleeping.

I’m not suggesting this should be a mandatory feature and come with an on/off option (as with Squeezebox control apps). If you don’t want it, don’t use it. I for one would greatly appreciate the option.

I should just be able to access the server as needed, and should not be forced to think about whether it’s sleeping.

And to accomplish this you need to leave your server on, sitting there waiting for your next command.

And to accomplish this you need to leave your server on, sitting there waiting for your next command.

And I would call that a user-unfriendly approach to the problem.

I think you may have meant, “without having to wake a Mac remote separately if it is sleeping” which makes sense.

Rene’s post above refers to iOS apps that can send a magic packet to wake up a server configured for WoL. Mocha WOL is a free one with good reviews, but I haven’t had any personal experience with it.

I can’t wake it using just Roon from another Mac. Thus my feature request.