So this morning I installed Roon and had it import all the music files from my NAS. Approximately 25000-29000 tracks. All was good with the world So oddly enough just now I switch over to my Roon software (core) that has been running most of the day and I find it is again going through the process of copying/adding to the library, it seems like it started from scratch again ( cannot verify that ) and is currently up to 21047 tracks.

I mount my NAS on my Mac desktop.

I guess I will see if this happens again, and post a follow up. Odd. Or I am losing my mind.

Why does Roon "lose" and then keep reloading my Library?
Sonic Transporter Network issues
kevin (Kevin Pierson) May 14, 2015, 3:38am #2

Hi @bplexico, we’re very familiar with this issue and I can tell you it’s because your NAS is mounted via AFP, not SMB. AFP is an unreliable protocol and in the next build we’ll be preventing users from importing files from a NAS that’s mounted via AFP.

To make sure your NAS is running the SMB protocol, enable Microsoft Networking on your NAS, and disable Apple Networking.

Remove your old watched folder in Roon and add the new one in the network path under settings / storage like this: smb://IP address of your NAS/Music directory

@kevin - Thanks for the quick response, I read about this issue, however I did not think it was applicable because I am not mounting my drive as a network folder with a network path and username/password, rather I am mounting it directly on my Mac Desktop. Perhaps I misunderstood the recommendations, and rather than have it auto mount as a drive on my Mac, and setup as a Local folder in Settings=Storage, I should instead mount it using the SMB string you provided?

And BTW, as I use the NAS for more than just storing my music files, I would prefer not to disable Apple Networking altogether on my NAS, unless all my macs will be happy using MS Networking ( and SMB ) which I guess may be fine.

So can you let me know about my first comment above in regards to mounting locally, and if that is not satisfactory than I will proceed with your recommendation and thank you!

I can however explicitly mount the NAS via the SMB syntax as a network folder if that is preferable to mounting it as a local drive.

Sorry for the long winded message, I do appreciate the help!

I have not disabled Mac File Service, I will await your reply and again thanks! 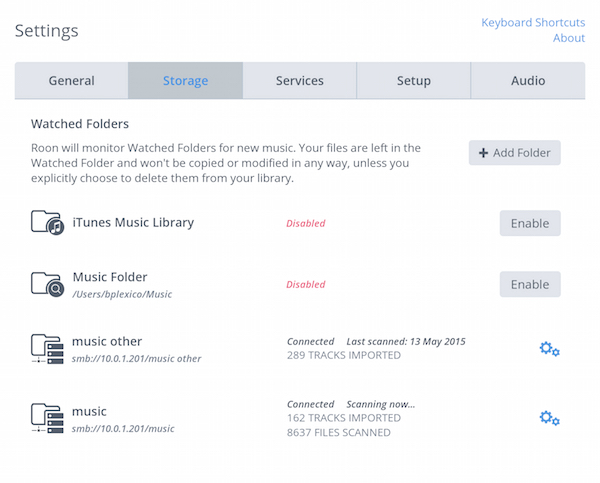 That screenshot is perfect! No need to turn off AFP as long as you’re directing Roon to your music folders via SMB, and you don’t have to mount the volumes if you’re doing it that way either.

@kevin - I actually have turned off AFP for now, because when I still had AFP on, and was directing Roon to my music folders via SMB I still got the issue with the library re-loading.

Scenario #3 - exactly the same as scenario #2, except AFP turned off on the NAS. So far it has run all day without a re-load.

Given everything works now, and your plans for later releases to address this issue long term, I believe it is moot at this point, no? After those releases happen I will try re-enabling AFP on my NAS to see if the issue persists.

Running Yosemite on both machine, BTW. And thank you very much for the support!
Barr

hi, i having the issue with my nas my book wd,how i can turn off afp?

I recommend you to check WD NAS manual, it should contain info regarding switching from AFP to SMB (those steps may depend on the NAS model and the firmware it is running).

As for Roon, to add Network Watched folder you need to use the following syntax:

\\IP address of your NAS\Name of the folder

\\NetBIOS name of your NAS\Name of the folder