Roon plays my own tracks seamlessly over Airplay to my Denon AV amp but not those streamed from Tidal - they skip a second every so often, often to the point of being unlistenable. Sometimes this happens with the first Tidal track I play, other times I can play say 5 or more without issues and the problems then start.

The issue only seems to occur with the combination of Tidal & Airplay. If I play my own music files via Roon over Airplay I do not encounter this issue. Also if I hook up a Raspberry Pi3 + HifiBerry Digi + from another room to my Denon AV amp and play Tidal tracks via that - again all is well.

My setup is as follows:

I have the basic Tidal UK subscription (not the lossless one).

The problem doesn’t occur on specific Tidal tracks, I can play the same track twice and one time it might play fine, the next it might skip 10 times during playback. I generally listen to my own Tidal playlists.

Are there any settings I may have overlooked that I can tweak to resolve this issue, or is it likely to be a bug?

Hi @James_Beshare ----- Thank you for the report and sharing your feedback with us. The insight is appreciated and sorry to hear of the troubles.

Moving forward, to help aide in our understanding of this behavior may I very kindly ask you for the following information:

Thanks for getting back to me. My AV amp is relatively new but I have experienced this issue ever since I started using it, prior to that I didn’t have a Roon endpoint in the room concerned. Like I say though it’s an intermittent, but frequent issue. I’ve tried to establish a pattern (time until the issue starts, time of day, overall LAN usage, load on NAS) but have been unable to spot one.

Thanks for pointing out the potential issue with my NAS spec. So even if the processing speed shown in the Roon remotes is hovering around 40x and the CPU load on the NAS is showing consistently as say 15% do you still think the under-spec CPU might be a cause? Is Airplay of Tidal more load intensive than Airplay of local files?

I’m happy to try and run the core elsewhere temporarily though as a test - I have an Intel i7 PC I could try it on at the weekend. Is it just a case of stopping the core on the NAS, installing it on the PC with a blank database and then trying Tidal over Airplay to the AV Amp?

Hi @James_Beshare ---- Thank you for getting back to me and taking the time to provide the requested feedback. My sincerest apologies for the slow response.

I still would like to make sure that this isn’t some kind of performance issues here and think testing the core elsewhere will be good a first troubleshooting exercise just to see how things behavior. With this in mind, I recommend the following:

Thanks for suggesting how to isolate the issue. I performed extensive tests over the weekend with the following results:

Roon Core running on Intel i7-4790 3.6Ghz desktop PC with 4GB RAM (not ideal I guess?) - no other applications running except background services:

I then shut down the Roon Core running on the desktop, started up the Core on the NAS and turned off volume levelling - unfortunately this didn’t make any difference.

So it does seem a more powerful processor helps with this issue, but that it isn’t perhaps the whole story? Out of interest, have the development team confirmed playing Tidal tracks over Airplay is a more load intensive task for Roon Core than playing local FLAC and mp3 files over Airplay?

Hi @James_Beshare ----- Thank you for the follow up and sharing the results of the proposed test! The feedback is very appreciated!

I am sorry I had forgot to mentioned in my previous that I had placed a feedback request with our tech team in regard to your question (i.e “…Tidal tracks over Airplay is a more load intensive…”) and expect some soon.

Additionally, please provide a screenshot of your signal path leaving Roon when the issue occurs with the “original” configuration in place.

I did some further tests at the weekend and captured the following screenshot during a period of skipping with the original configuration: 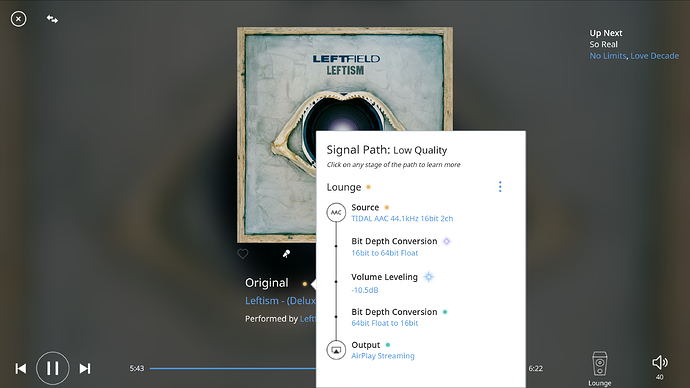 Hi @James_Beshare ---- Thank you for touching base with me and providing the requested feedback, very appreciated! My apologies for wait.

Continuing forward, I had a chance to touch base with our tech team in regard to this behavior you are experiencing while streaming TIDAL content to the AVR-X3300W. As per the team request they have asked if you could please:

Sorry it’s take a while for me to respond. In answer to your questions: 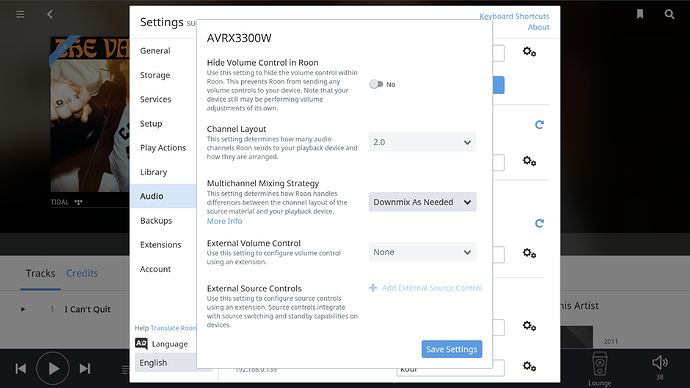 Just wondered if there had been any further ideas around this?

Hi @James_Beshare ---- Thank you for reaching out and my sincerest apologies for the delayed response here.

Moving forward, I asked our techs this afternoon for an update on this behavior you are experiencing when streaming TIDAL content via Airplay to the Denon AVR. They have a theory that the Denon is expecting a “full” bitstream and if we are applying too much attention to the signal it has the potential to misbehave with the DSP processing on the Denon.

With the above in mind can you please verify what the experience is like if use the Audyssey “Dynamic Volume” option on the receiver as opposed to enabling “volume leveling” in Roon.

Sorry for the extremely late reply. I think my mobile connection died when I replied previously and it looks like I didn’t notice my reply didn’t go through.

I tried the above volume suggestion but no joy. I’ve since found a few other people on other forums having similar issues with Airplay through their Denon’s generally - so sounds like it can probably be put down to a bug on the Denon side. That said, if your techs think otherwise or have any further suggestions if future that would be great.