Show Qobuz purchases in the Qobuz tab under ‘My Qobuz’?

@mike I know you have removed the Qobuz purchases from the roon library, and I agree with that. But can’t you show the purchases just in the Qobuz tab under ‘My Qobuz’?

Maybe this should be a future request…

I fully support his request. For now, I have tagged my albums purchased at Qobuz.
Dirk

Why?
If you own a FLAC File, why do you care where it came from?

Very true, it is not that important. Its just that ‘My Qobuz’ feels naked without it, it doesnt show all of my qobuz.

I am very frustrated by the latest upgrade.

Unless I’m doing something wrong it also seems if I search Qobuz for a hi res purchase it will show an artist with file availability say as:

…but if I stream it, it only uses the CD quality stream, not tried with Favourites but I don’t rate adding purchases to Favourites as anything but a poor workaround: 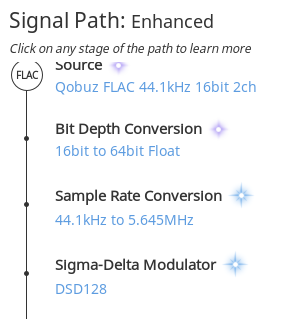 Just curious, but why would you want to stream it via Qobuz rather than play the purchased and downloaded file locally from your own network?

A lot of the Qobuz files stream at lower quality than you can buy them at. Add the high res tracks to your library if you want them.

I support this request. It’s a matter of completeness and convenience, not a dealbreaker. I know I can see the record of my Qobuz purchases via the Qobuz desktop app and via the Qobuz web app, so it seems a little odd that I can no longer see them in the My Qobuz section of Roon.

I know that in the initial release of Roon, the purchased albums also got synced into the Roon library, but I thought that this was an oversight by the Roon team - just listing them would give parity with the other Qobuz apps.

A lot of the Qobuz files stream at lower quality than you can buy them at. Add the high res tracks to your library if you want them.

I saw options to add to the library in various levels of quality up to the purchased max.

I assume this only adds a link to the streams rather than downloading locally to the LAN (My Library has several components and paths).

While this might suit some people I’d rather be able to view all my purchases as a group in My Qobuz as I could say with Audirvana - the previous Roon display of Purchases was I think the best to browse of options I had available.

I guess one could create some kind of filter to display only Qobuz files in the library, I just feel Qobuz purchases make more sense under My Qobuz with or without adding to the Library which should be the user’s choice to add or nor.

A lot of the Qobuz files stream at lower quality than you can buy them at.

It may just be an oversight with a bit of app fine tuning needed or a preference for streaming, but if I’ve purchased in 96/24 I think it would be reasonable to be able to stream in that quality from a Qobuz search not 44.1/16 which it seems to default to without having to add to library.

Just curious, but why would you want to stream it via Qobuz rather than play the purchased and downloaded file locally from your own network?

I’ve bought a lot from Qobuz, and I enjoyed being able to browse my purchases grouped under My Qobuz as I can with other apps from Qobuz themselves or 3rd parties.

Some of these purchases include very large compilations which take ages to download and sort - while I know I need to download the stuff and backup in case it becomes unavailable at some stage, the ability to easily stream certain sections of a compilation were great.

I also think the presentation of Qobuz purchases was very easy to browse unlike their website for historical purchases, which meant I might more readily find a purchase I’d forgotten about or not yet played (several).

I could use the Desktop app but it fails miserably for gapless to my equipment, and Roon just solved that problem with the previous release allowing me to play gapless purchases easily which never worked via their iOS app to Chromecast, and removed the Airplay limitation of CD quality only.

There’s also perhaps the issue of duplication if elsewhere in my library I have older CD rips or even lossy files - using purchases in My Qobuz I’d directly get the hi res version without filtering or carefully selecting.

I can quite understand users not wanting purchases added directly to the Library as they may already be there, but adding to library on an individual basis (unless there’s an easy way to add all and filter) is cumbersome at best.

The solution others have suggested of retaining the purchased list in My Qobuz but not automatically adding to library would surely be fairly simple to implement and satisfy all Qobuz users?

Yes i strongly support this idea …brings us back our Qobuz purchases in My Qobuz …so nice as Audirvana offers .I use both software together …great competition upnp versus roon…for the moment roon is winning thanks to the great user interface but Audirvana will launch a new MAC version …just wait …

Why?
If you own a FLAC File, why do you care where it came from?

because my preferred sorting order for my Library is… was, before Roon’s auto-adding there all my favourites too (and in a totally random order

), “By Date Added”
Now I must always use “search” inside my own library too

I once had this problem when I replaced my core, all the albums got the same date. I went into Settings somewhere and told Roon to use the File Modified date (I think that worked better than Created). You might check if that works for the purchased files.

As i recall, once I cleared up the dates for the existing albums, the normal procedure worked going forward. Dont remember exactly what I did…

issue with that (I have Roon set exactly the way you said) is that all favourites have been added the day Roon 1.6 was released. Then, most of them, again a few days ago, when v401 was released

The file date should take care of the purchases, though, right?

I’ve never had the Favorites problem, didn’t use either T or Q without Roon.

No bulk edit for import date, no file date for streaming content…

I support this request. Please give us back the showing of the purchased albums in my Qobuz.

I do not understand why the Qobuz purchases had to be removed from being automatically be present in the library. Allegedly the issue was that this would cause that certain albums are present twice in the library. But is this a problem to be overcome? I do not see this as a problem.

I do not understand why the Qobuz purchases had to be removed from being automatically be present in the library.

sorry: I do not understand, instead, why Roon, not me, is in charge of deciding what has to be in my library!

once more: let users pick what they want auto-added to their libraries (… if anything at all) and everyone will be happy

I agree completely. My Qobuz purchases should be visible in Roon…