Showing off your DESKTOP Roon setup

I can make these default on HQPlayer OS image.

@jussi_laako thank you so much for your feedback!

FYI screenshot the tic_frame_size_at_1fs was 192. Circled areas were the playout delay of DSD256 and related frame counts. Tried higher (up to 1024) and lower (down to 48) numbers. I personally thought 192 was the best choice IMHO. 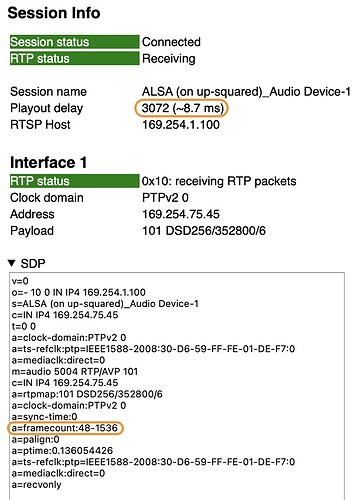 “responses were inhibited irrespective of the volume level when hearing jazz”

What an awful study

The subjects wore headphones that emitted a different sound in each ear.

The participants were required to push a button each time they detected auditory stimuli in their left ear, while simple sounds or a jazz piano tune were played in the right ear.

Although playing simple sounds in the right ear had little effect on the results, responses were inhibited irrespective of the volume level when hearing jazz. This led to a slight delay in the time the button was pressed.

And from this they conclude that “Listening to music while driving, studying or going about other tasks that require attention can result in lowered concentration and efficiency, even if it is not played loud." How did they come to that conclusion? Clearly hearing something in one ear will impact the ability to discriminate with the other, and I suspect that other genres would have much the same effect, but how can they go on from that to talk about driving, studying and other tasks? I’m currently typing, with music in both ears, and I’m pretty sure it’s a task I can manage just as well with no music playing.

At the end of the article:

According to the team, the outcome likely is due to the fact that the music diverted the subjects’ attention from the button-pushing sound.

Sorry, felt the need to rant.

I only posted for the comic effect. Your rage return also made me smile.

I only posted for the comic effect.

I know, and I’m not sure why it wound me up, other than that it’s been one of those days

Well having let off steam, listen to either something light and pastoral or something heavy and thrash.

I believe you are a photographer, you could post something here to share and forget about psychoacoustics…

Your Nice Photos Off Topic

OK, prompted by posts in another community I thought we needed a nice photos “area” where we post attractive photos, whatever the reason, landscape, sunset, panoramic etc. You may be using the latest iPhone or a Nikon D6 but we want to see your pics (a short description may be helpful) over to you…

Well having let off steam, listen to either something light and pastoral 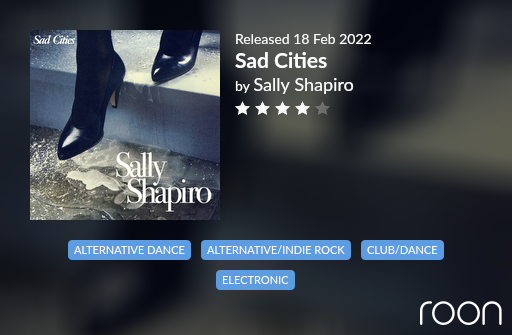 I believe you are a photographer, you could post something here to share and forget about psychoacoustics…

Purely for pleasure these days (it didn’t pay enough of the bills), but I’ll definitely post something. Don’t know how I missed that thread

You missed it because I only started it a few days ago, i decided I needed a distraction from psychoacoustic affairs, as well as MQA, cables costing £1000’s & snake oil.
Your pics will be most welcome, I’m fed up of mine 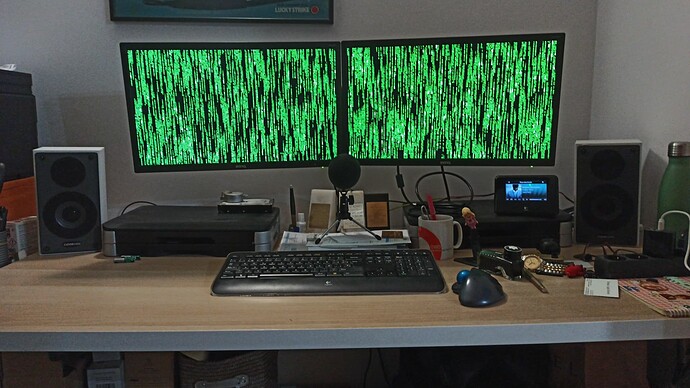 A couple of second hand CleverAudio 1005036 active monitors connected to a SqueezeBox Touch. I am using it native, no DAC connected. Despite having already used like this I understand this place and motivation does not need that investment. I do not think final result would worth it. 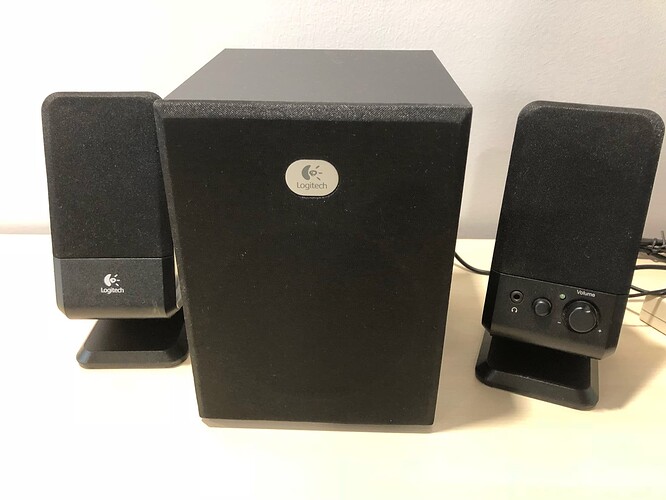 About costs, Squeezebox Touch is only available 2nd hand but around 180 eur and the monitors were bought per 45 eur, give or take. 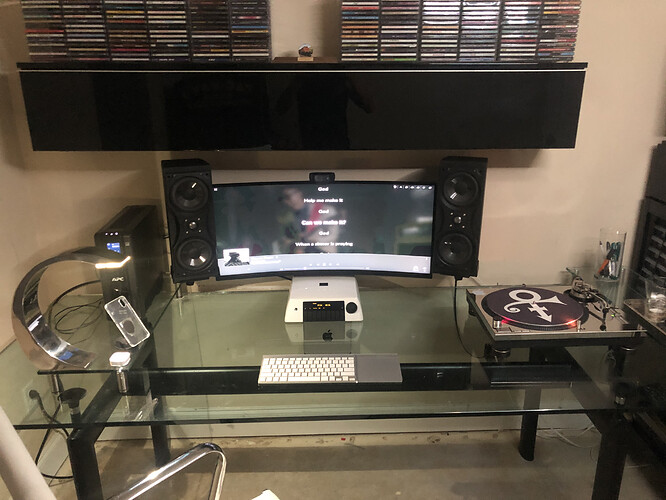 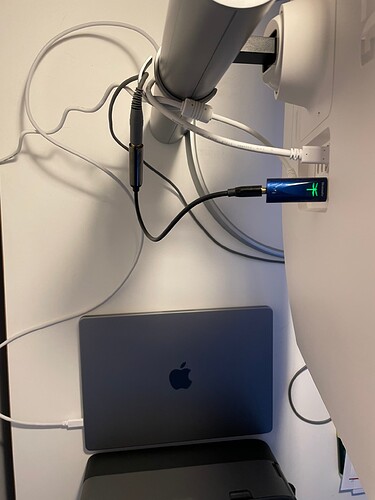 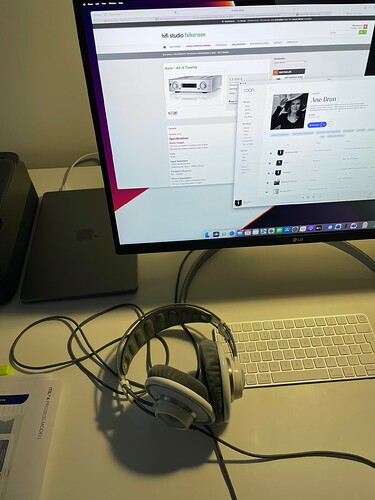 Pretty simple Roon setup at my workdesk. Chord Poly and Mojo with MrSpeakers Æon Closed headphones there right in the middle. The weight on top is just for keeping DAC and streamer from moving around… 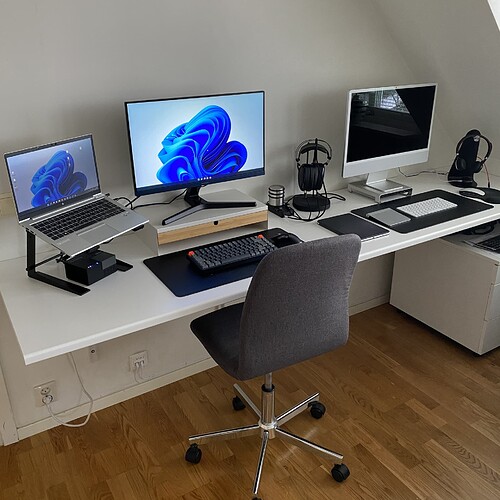 for scale, what size is that monitor?

The monitor is 34 inches wide. 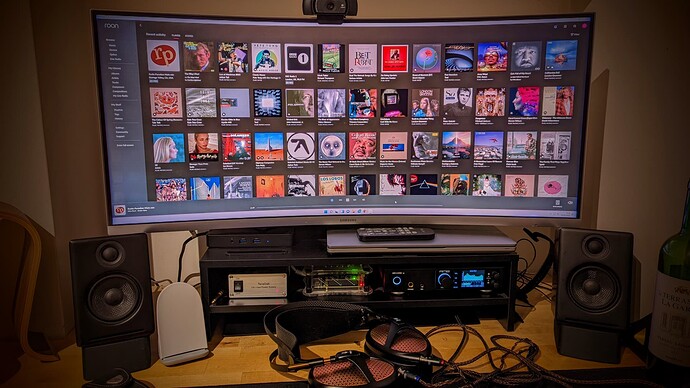 The Pi is not setup as Roon endpoint at the moment but instead used for listening to radio whilst I’m working during the day without having to fire up the main 12 core home rig under desk.

I do really like the Audioengine 2+ speakers. I bought my son a pair to take to university many years ago and eventually bought myself a pair, mainly due to space constraints. Sure they have a bit of a bass hump that can become pronounced if played loud but at modest volumes, I find them detailed and musical with an engaging presence and charm about them. For sure, I’d get a pair of LSX if I had space but (as you can see) I don’t…

I’m absolutely delighted with the RME, it’s an astonishing bit of kit and suits my needs perfectly.

There some really fine music displayed on that beautiful monitor.

What you see here (in Roon) is a combination of many old faves, some diving into nostalgia and recent discoveries whilst listening to Radio Paradise. For me, the #1 killer feature of Roon is listening to RP and being able to click on the artist/album being played (now the links now appear to be properly fixed) and discovering more about them and then adding the album to my collection (via Qobuz).

The monitor is great. It’s a Samsung 34" CF791 that I treated myself to back in 2018 when I started working from home full time. I needed lots of pixels for handling multiple windows for my job plus it has decent default calibration for working on photos in lightroom (hobby). The curvature of the screen is nowhere near as pronounced as it appears in the photo but the curvature definitely works well on a widescreen of this size. The screen is bolted to the wall and now raised to it’s maximum possible height with a 2mm gap to the top of the speakers which I bought 2 years later. So it’s all a tight fit.

I would post some pictures of my man cave set up but it’s not exactly a desktop set up since I have a full stereo system in the room, the sound of which comes fairly close to that of my main audio system. And of course it’s based on a Benchmark DAC3 HGC so headphones are also in play.

by the way, the more Richard Thompson the better.