I note my audio signal chain quality is low when streaming DSD. I’m running Roon on a dedicated NUC5i7, streaming from an Aurender W20 into a MSB Diamond DAC via a balanced AES/EBU, using the MSB master clock. Despite that, quality is low. I don’t understand what I’m doing wrong, can you offer a solution please? 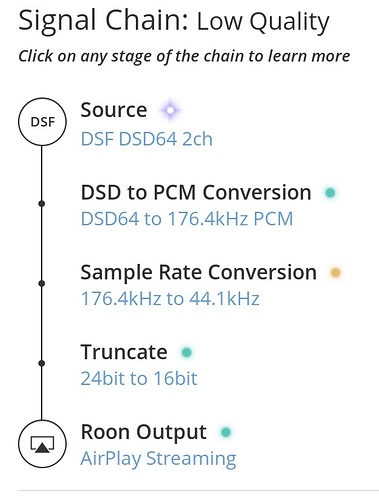 AirPlay is limited to 44.1 or 48k resolution, and PCM only, so Roon is downconverting the source to a format that can be streamed by AirPlay.

RAAT can stream DSD. To use RAAT you need a RoonReady device (eg. Auralic Aries, many more to follow) or a device running RoonSpeakers (next major release).

Aurender will be RoonReady in the (near) future. Once updated, you will be able to send full HQ audio from Roon.

Their latest reply on the CA forums this weekend was something along the lines of 'Patience, Grasshopper!’.

Ok, so the word was"patience" in Jan, but enough already… We’re now in May. I’m tired of waiting. I don’t understand why it’s truncating “due to my hardware” - that’s B.S. My DAC is capable of supporting full 32 bits, and not just “floating.”

And it’s utterly ridiculous that this configuration cannot manage to synchronize… Repetitively, I have to pause my sounds for 5 sec when playing through ROON, because the data gets garbled up. That’s the last thing I would expect from a $40K DAC, $18K Aureneder W20, dedicated 5i7 NUC with 16GB of memory and a 500GB SSD and top notch AES/EBU cables fed through a $10K clock! This is ridiculous.

No one in the ROON, Aurender, MSB chain is taking responsibility… I’m just told to be patient. This stuff is just not baked yet…

My friend, with the same system just gave up and sold his gear… I’m getting close to doing the same now that Aurender is saying they are having second thoughts about supporting ROON. There was certainly something to be said about the total integration that the early Sooloos system offered… One neck to choke certainly placed the responsibility in the right spot…

I’m very disappointed, beyond patient, and now a dissatisfied customer…

Crazy that these “hi Rez DSD” files play worse than 44K red book, after getting down sampled from 705K to 44k and 16bit… This is not what I invested in… 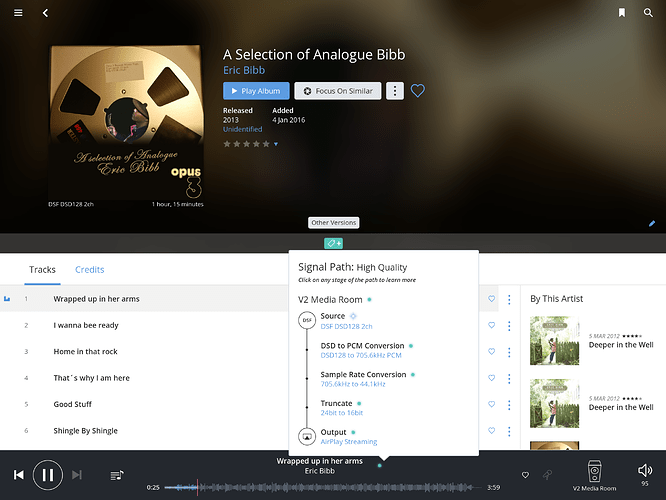 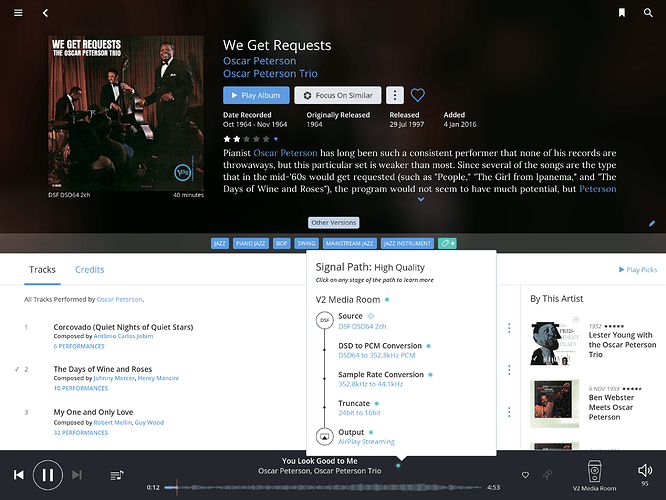 I can well understand your frustration. Let’s drop a flag for @danny or @brian to see if there is any news they can give us from the Roon end as to the Aurender becoming Roon Ready. It is possible that they cannot, because there can be agreements with partners regarding what can be said publicly.

The “good” news is that now that Roon Bridge (new name for RoonSpeakers) has been released, it is currently possible to stream DSD output from Roon by Ethernet to a small footprint device which is Roon Ready or which has Roon Bridge running and which can then connect by USB to your MSB DAC, bypassing the Aurender. That can deliver DSD from Roon to your MSB DAC without conversion.

There are two Sonore devices which can serve in the above role, the SonicOrbitor SE, and the just released microRendu. Other commercial devices will be entering this space in the future. The Auralic Aries is a Roon Ready Wi-Fi streamer, but the Aries Mini is not Roon Ready.

Roon Bridge has been released in Linux, Windows and OS X versions and there are posts on the forum about DIY solutions for small ARM devices such as Raspberry Pi or CuBox-i, which can be good inexpensive solutions.

Having regard to the quality of your gear, however, I would suggest having a good look at the microRendu. It could fit the bill for you until the Aurender becomes Roon Ready. At that point it would be interesting to see which you preferred.

No one in the ROON, Aurender, MSB chain is taking responsibility… I’m just told to be patient. This stuff is just not baked yet…

@VAV – The problem above is that you are streaming to the Aurender via the lowest quality method possible: AirPlay. This is because the Aurender and Roon won’t work well over the network until the Aurender becomes “Roon Ready”. I can’t speak to when this will happen, as the ball is in their court.

As for MSB, they are being fed the poor audio from the Aurender due to the AirPlay limit, so don’t blame them!

If you have the USB upgrade for this DAC and don’t need physical separation, you should plug this into the NUC directly via USB. Then you wouldn’t have to wait for Aurender and would remove an entire piece of technology from the equation (less components could lead to better sound).

This DAC has MSB’s great reclocking technology, so there is nothing your Aurender is doing that it can’t do itself.

If you need networked separation, then @andybob’s suggestion of using a lightweight Roon Bridge based box is a great idea.

Either way, I’m not sure what that Aurender is doing for you that the MSB’s USB upgrade can’t do. It seems to just be a bottleneck in your setup.

Another thing to note is that the MSB also should eventually become Roon Ready directly, via an ethernet upgrade, which would give you the best of all worlds.

For how good your gear is, and how much you’ve spent on it, I suggest you go with the USB connection, or the microRendu for now. Once the MSB has a Roon Ready ethernet module, you can eliminate the USB/microRendu as well.

@danny Danny, any updates on Roon Ready upgrades for the W20 or MSB?

As you can probably understand, I can’t speak to specifics of either company’s product release schedules.

We have been in contact with both companies, but have not yet received any gear to be certified.