Signal Conversion where it should be Lossless

Both the Google Home Max and the Sony AV Receiver I am using should support 24-bit / 96kHz files but when I stream from Roon it is does a conversion to end up with a 24-bit / 48kHz signal. I have reviewed answers on the forum and looked in DSP etc. but there Roon doesn’t seem to know that these outputs will support 24-bit / 96kHz and there doesn’t seem to be a way to let Roon know that they will. I’m using Chromecast to make the connections and I thought this should be supported. 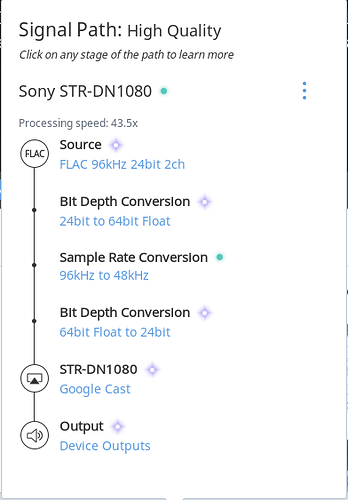 While they might be capable of 96, the devices are probably identifying their capabilities to Roon as only 48. Google’s own app probably doesn’t even check, but, Roon does and uses the devices’ responses.

Roon does not have anyway to force a resolution which the hardware itself says it cannot handle.

There are a couple of threads if you search on the forums which go deeper into the technical specifics if you are interested. Here is a good one to start:

I’m sure that when I tested out a Chromecast device in the past, I had to use a Google Home app to set the device up and select the 96-24 capability, as it defaults to lower speed for compatibility.
As Daniel said above, Roon only sends what it is told the device can receive.

Thanks for your speedy response. I’ll have a read through the article you suggest and see if I can get any further with it. I do have a Chromecast Audio downstairs for the main hi-fi that I’m pretty certain successfully supports 24-bit / 96kHz FLAC files (I’ll double check that) so it’s not the end of the world, but it does seem a shame since both these other devices are meant to support this format.

My main hi-fi is a pair of AVI DM10 active speakers with associated sub-woofer. These are fed directly from the Chromecast Audio and sound fantastic.

I have the Google Home app and I have gone through all the properties for all my devices and I cannot find anywhere where it lets me control the capabilities as you suggest. It might be that it depends on the information the device itself is providing, as suggested elsewhere, and it’s a real shame if this issue boils down to lazy implementation of a software API. It wouldn’t be the first time I’ve come across that though.

Nice… I have a pair…shipped to California about 4 years ago.For bedroom use.My mains are Dynaudio Focus XD 60.

Thanks. That’s a serious bit of kit for bedroom use!

I’ve been an AVI fan for many years. Still use a pair of Positrons for my AV system and still have the S2000MP pre-amp and S2000MM mono-bloc power-amp pair I bought sitting in their boxes in a cupboard. Crying shame not to use them but I have embraced the computer audio trend (hence the Roon lifetime membership) and as my S2000MC CD player broke I haven’t had cause to bring them out.

Still feel I should have a CD player in the house as I have a couple of thousand CDs, but haven’t got around to getting a replacement for the AVI yet, and only really need a CD transport to go with the DM10’s.

Yes, I embraced digital fully too.
AVI has no footprint in the USA. Resale wouldn’t be worth it.
I replaced the original tweeters with the Satori…rd’ by AVI.These are what they are putting in the new DM 12 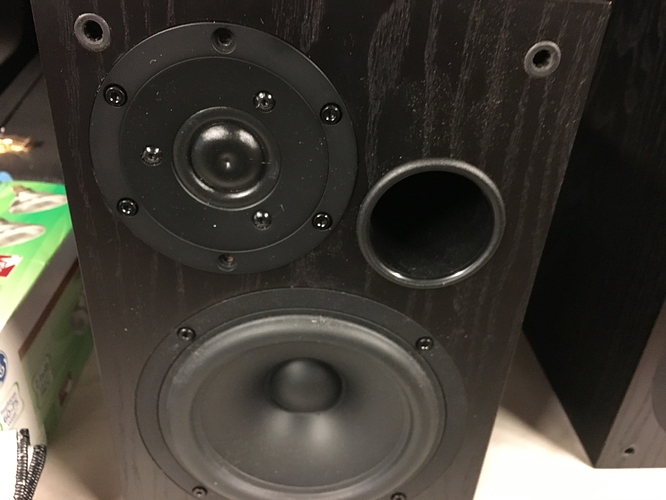 Great photo. You’re clearly a serious audiophile; I’m just a music nut really (without too deep pockets). As I’m in the UK I was lucky enough to visit Ashley to check out the DM10’s before they went on-sale, and I was happy enough to grab a pair when they did, although I would have preferred floor-standers. Always aesthetically more pleasing I think.

I listen primarily to classical music, and more specifically piano music, so having a really good clean unbiased sound is my preference. I’ve always found AVI to give me this but I suspect my ears aren’t that good!