Network Details (Including networking gear model/manufacturer and if on WiFi/Ethernet)
N/A, playing on the machine itself

When my playing CD advanced from 1 track to the next I heard the Bifrost click because the sample rate changed. I then see the playback info say MQA. I’m playing a 16bit 44.1 ALAC file so that is not possible (but the click indicates the Roon changed sample rates). As far as I can tell this track doesn’t exist in Tidal where it might be plaything that instead. Screen shot: 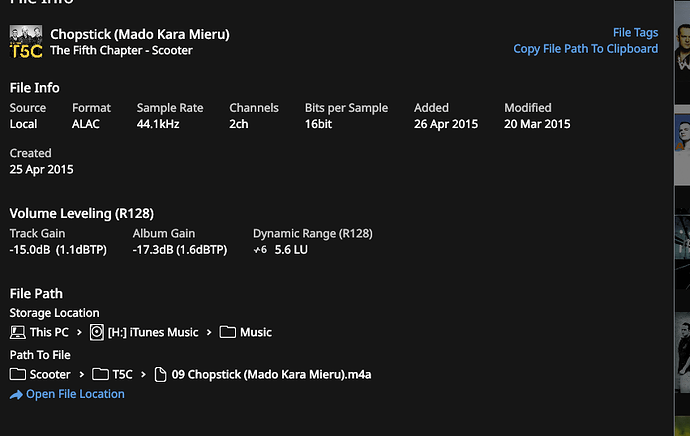 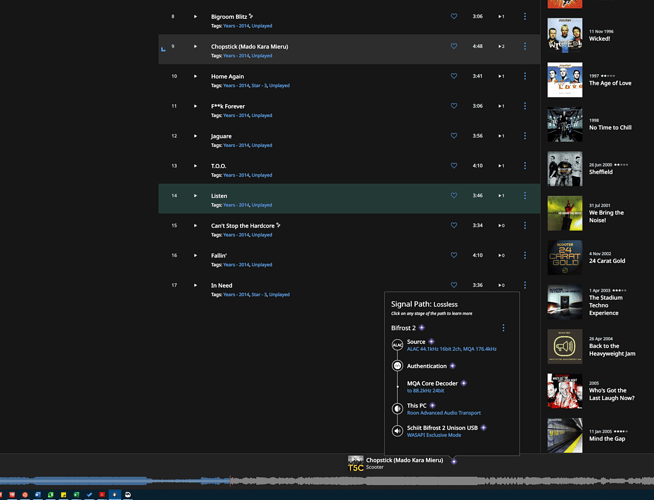 The track exists in Qobuz and it too is an MQA track. In fact, in Qobuz the album is listed as having “Mixed Formats”. It is certainly decoding as MQA.

I do not have a Qobuz account. But I suppose that doesn’t necessarily mean Roon isn’t sourcing data from it. I just tried disconneting from the network and the problem persists.

It is not a problem as such. You have an MQA encoded file in an ALAC container. There are releases out there with some tracks MQA and others not. It seems to be working as it should. MQA should work with any lossless PCM format.

Theoretically it is possible to use any lossless audio codec as an MQA container. If there is valid MQA content encoded in the audio it would be expected that the MQA authenticator and Core Decoder would engaged.

That said, I believe this may be a false positive. I’ve forwarded this report to the QA team.

Thanks. So is it possible for iTunes to rip a track that contains MQA data and create an ALAC file without knowing about it? How does the ALAC container tell the decoder that MQA data is there? I know MQA is supposed to hide in the noise but I would think there has to be something in the file that says this is MQA data and not noise.

Also if a file has MQA I would think Room would indicate that in the first screenshot.

While there is MQA related metadata tags, they are ultimately unnecessary for the MQA decoding process. All of the MQA Core Decode/Rendering data is contained in the audio itself.

I then see the playback info say MQA. I’m playing a 16bit 44.1 ALAC file so that is not possible

is it possible for iTunes to rip a track that contains MQA data and create an ALAC file without knowing about it?

How does the ALAC container tell the decoder that MQA data is there?

I would think there has to be something in the file that says this is MQA data and not noise.

They are embedded inside the PCM music data to be found from MQA authentication. There can be MQA tags, but they are optional and a correct decoder implementation does not depend on those tags.

Given that The Fifth Chapter was released the same year as MQA was launched, I’m going to guess it unlikely that any of the CD was encoded with MQA…

The signal path, the DAC sample rate change click, and (I assume) the OP is not hearing noise, are sufficient proof as far as I’m concerned.

Of no doubt, if Roon thinks the track is MQA and thus does the MQA processing, you’d get the click and signal path, etc. But I suspect there is something to this track that has tricked the MQA detection algorithm into thinking it is an MQA track when it really isn’t. MQA was launched in December 2014, after this album was released.

Also, this would be the ONE track across ALL their CDs that is MQA encoded. (Never mind Tidal re-encoding everything for their streaming service to get the MQA branding to show up. Talking actual CDs here, since the OP mentioned this is a self-made CD rip.)

Tidal identifies this CD as 176k MQA through Roon. However only that one track actually unfolds in Roon and my hardware does not see it as MQA. Either in its normal ‘renderer only’ mode or as ‘decoder and renderer’. Finally, even though my hardware fails to recognise the track as MQA Roon tells me it is rendering or doing a full decode depending on how I am using it. The hardware is a Teac NT-505.