Just wondering - sometimes, when go click on an artist, the artist image is expanded to fill the whole part of that window, and at other times the image is quite small (though if you click on it, it enlarges). What determines whether an artist has a full-window sized image or not? Is it the size of the image itself? If it is, I would prefer to still have the image enlarged, even if it is a bit grainy, as I think this looks better than the small boxy image.

We determine this based on image size and also the aspect ratio. We try to pick images that not only are high resolution but are also landscape so that the most important parts of the image don’t get cut off. We do however have a minimum resolution that, even for landscape images, we still show the image next to the artist name instead of as the background. I don’t know the resolution off-hand but we tried hard to make sure that you always get the best possible presentation for each individual image.

Thanks Brian. Be good to know what those resolutions were so that when we are manually adding an imagine, we know what size to look for.

Any clue as to when the next build will be released, and when we will be able to edit the artist images and other metadata?

A build was going out today, but we are delaying until tomorrow since most of our team is off for the holiday here in the US.

This one focuses on audio quality improvements and Android!

Editing and ASIO come next!

That’s great - so is it today the next build is released ?

The new smaller album art sizes is a nice touch/feature

Having a problem with Roon version 1.1 - no matter how large the artist image is that I add (e.g. 2808x1908 that I’m trying right now), Roon still shows it on the artist page as a small image rather than as the background image. Is this a bug?

Roon still shows it on the artist page as a small image rather than as the background image. Is this a bug?

Right now, the positioning is based on the shape of the image, not the size.

If we crop square images to fill the header, you will almost always get a giant picture of the artists forehead

That makes sense - thanks, I will investigate further!

there is a bug in 1.1 related to editing artist images… it will be fixed in the next release.

it tends to use the roon/file images over the edits, in some cases

Dragged up an old topic I know, but I really noticed this today and couldn’t help but think if you ever review this, it might just be nicer to have a consistent look as mentioned above - even if the images are a bit soft due to resolution. IMO the icon style doesn’t look nice. I believe you scale up quite a bit on discover/overview layouts and it works pretty well with even really low-res stuff.

Related notes - sometimes the icon has incorrect aspec ratio, and/or when you expand the image is pressed to reveal its full glory, it’s often scaled to what appears to be the same resolution as images that are displayed ‘full width’.

In many cases clicking to display the full image is actually smaller than the background image. 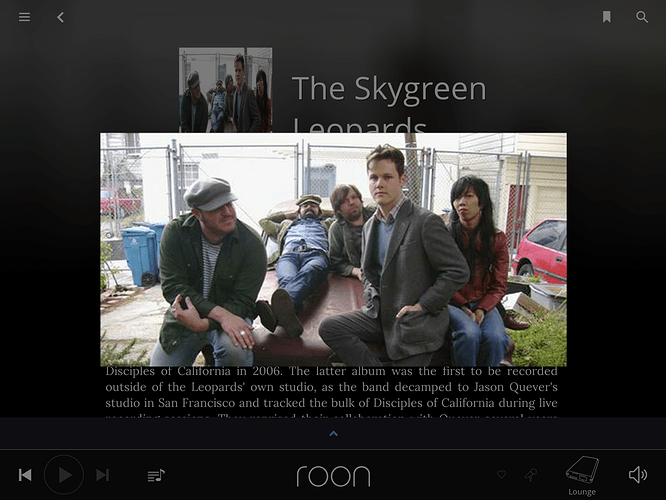 I’m still to figure out what shape of images to use to get Roon to show it like background and not like portrait. Roon doesn’t seem to want to show any manually added image as background. I just get grey surrounding the image.

Is there a way to solve this that I haven’t found across this forum, or is this something to be amended in future releases?

I think this is what you’re looking for: