Playing Tidal tracks results in frequent skipping and drop outs in most tracks. This has started happening over the last couple months, but it feels like it’s gotten significantly worse in the past week or two. Sometimes the track will just skip to the next one in the queue, as well.

One of the major benefits of Roon to me is being able to unify my local library with music from a streaming service, so not being able to play Tidal tracks correctly is a huge issue for me.

I just want to confirm with you here, when you are outputting via the Rasberry Pi, is it still feeding into the Sprout or are you using the digital out to stream to another DAC? Can you confirm that the same behavior occurs on Windows 10’s “System Output”?

How is the Macbook connected in this setup, is it on WiFi or Ethernet? Is there any change if you connect your Macbook via Ethernet as a temporary test? What is the exact model of your Netgear router? We have seen a few Netgear routers need special settings applied to work properly with Roon and we have documented a few of these cases in our Networking Best Practices guide.

Thanks for the response!

The Raspberry Pi is outputting to a Denon receiver via the digital out. Not connected to the Sprout.

The Macbook is connected via USB to the Sprout and to Roon over wifi.

My router is a Netgear R7000P. I’ll test things out over ethernet this evening and get back to you.

I’m betting you have some Wifi or internet issues. How old is the MacBook? What is the wifi connection - hold down option key and click on the wifi in the tom menu bar. - you should see something like this image below.

if you run a speedtest.net test what is your internet speed like?

What model RPi is its and just for giggles what OS is it running. 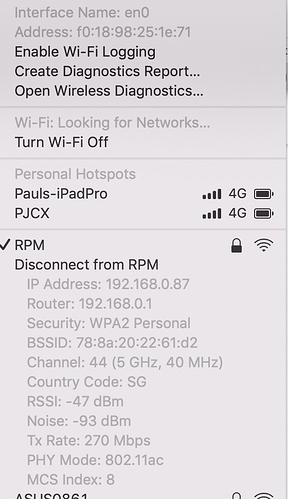 Alright, so it looks connecting the Windows core via ethernet causes the issue to go away, so maybe the wifi adapter on that PC has some problems (I don’t use it for much outside of a Roon core). Things have been working without issue for a year or two with the current setup and my Internet is consistently fast and stable on all devices throughout the house, so I assumed it was Roon specific. Thanks for pointing me in the right direction!

Glad to hear that things are stable on Ethernet! I agree that it could be the WiFi module in your PC or the router as well. If you wish to troubleshoot this further it would be an interesting test to see if you experience this issue with another PC running the Roon core on WiFi.