When I run in full screen the dock obscures the controls such as Queue and the player controls. I must be missing something as this seems to be a fairly material issue

How do I see the controls when running in Maximize or Full Screen mode?

How do I add to the queue if I cannot see the queue?

On retina screens, Apple uses pixel quadrupling to keep the OS interface at a sane size. This means that your screen resolution effectively comes down to 2304/2 x 1440/2 = 1152 x 720 points.

For running Roon full screen, press Alt-Enter (or Control-Command-F) while Roon is active in the foreground. This way, Roon will have the full screen real estate all by itself. You can go back and forth to and from your main desktop by swiping left and right with three fingers on your trackpad.

I’d also suggest that you move the Dock to the side…or even better IMHO, to use the “disappearing dock” option available within Settings…it reappears once you mouse scroll over the bottom area

The best way to switch between screen resolutions on your Mac. You can change to resolutions Apple doesn't offer on retina displays.

Roon seems to like that better, as I can see the Roon player controls with the Dock underneath (I have tried the disappearing Dock in the past and would prefer not to use it.)

Will play with it a bit and see if that solves the control visibility problem.

Still want to know how to add to the queue without Radio on.

As for the queue: just find the music you want to listen to and press play. In the ‘paw masher’ screen (the big overlay with the play buttons), the bottom two are ‘Add next’ and ‘Add to queue’. In the first case, your selected music will be placed on top of the queue and play right after the current track/work is ended – in the latter the music will be added at the end of the queue. 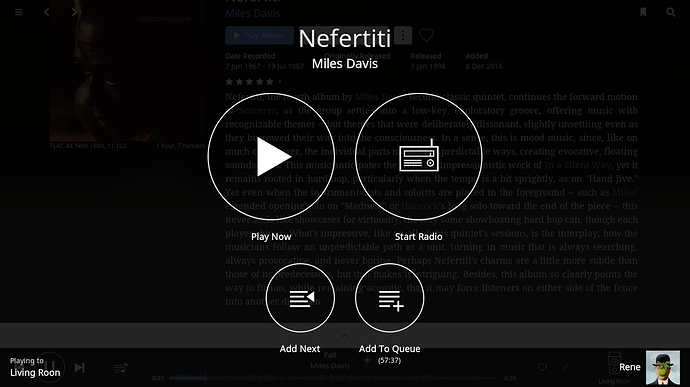 That was easy. Ok-will educate myself some more about queues.

The more you immerse yourself in the wondrous world of Roon, the better it gets.

I have tried the disappearing Dock in the past and would prefer not to use it.

Thanks for the hints.

Definitely like Roon better than the alternatives I tried. It is truly a robust solution.

Personally I have trouble with Albums being split into many tracks when imported from iTunes database. I have followed some advice from other users and spent hours and hours trying to merge the albums. Or Roon database does not find the right artwork despite being major releases. In iTunes the album covers were there for the most part. In Roon-not so much.

I was hoping for more effective merge and album configuration tools in next revision. Certainly there are a lot of tools. But they rarely work for me and so I remain with 5 or 6 albums with just a few tracks separated when they should be one album. Or the tracks never line up to the album artwork options presented. Overall pretty frustrating. For now, I just leave the extra albums and loose tracks in the database.

Really hope this orphan and artwork issue gets addressed in the future.