it does not happen all the time but, on the occasional late night listing session tracks contain snap crackle and pops like a dirty record. I thought it was the one Bluesound connected to the PSAudio analog, so I rebooted, changed from a Tidal track to a Flac file from my library still had the issue.
tried the Oppo, same issue and the Shiit Modi-same there too. The S,C&Ps don’t happen in the same spots.
I’m thinking it might be Network issue, also thinking of migrating the Roon Core to a dedicated music server Mac Mini or Nucleus. I would like to know if anybody else has had an issue like this before spending on a new server.
Much appreciated.

Can you post some screen shots of the signal path for some of the devices when playing. Do you have anything else happening on the network like kids gaming or something on the iMac like time machine doing backups to a networked drive?

Thank you very much,
There are security cameras on the network, no other applications are running on the iMac.
Wifi is off on the iMac well.
I bypassed Roon and played the same files off Tidal directly from the Bluesound app. and there are no errors. 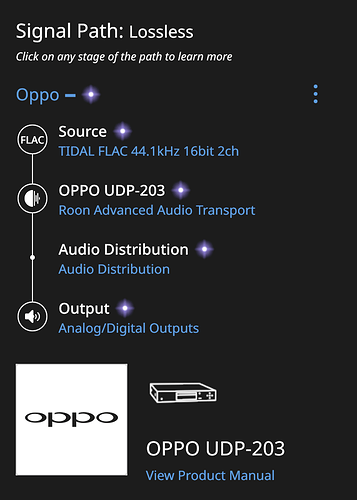 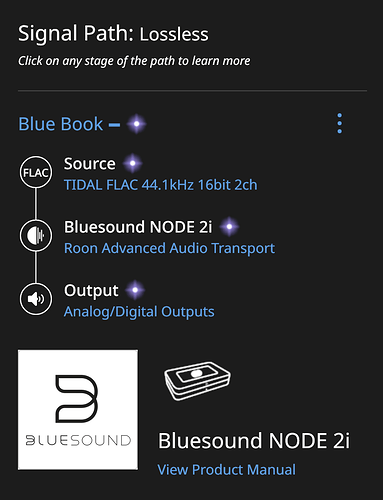 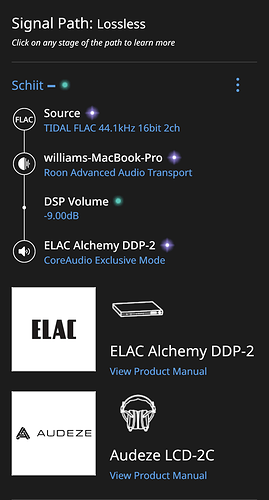 Hello @HearcleaR, do you still hear these pops if you disable DSP or play to system output?

DSP on or off seems to make no difference, but playing out the iMac headphones with no DAC or other hardware it is clean.

Hello @HearcleaR, thanks for your patience while I reviewed this item with my team. Could you please test local content playing on your Schiit Modi connected to the core via USB and let me know if you still hear these noises?

Hello @HearcleaR, next time you’re able to reproduce the issue could you please reply here with a timestamp so I can enable diagnostics for your account and create a report for our team? Thanks!

Hi Nuwriy,
Still have the issue, running on the different Core/MacPro.
Output directly from the computer seems OK it is mainly the Bluesound Nodes.
I lowered the Max Sample Rate to 48/24 and the issue is less frequent but still audible.
Cheers

Hello @HearcleaR, Do you see this behavior if you play to a single device instead of a grouped zone?

After changing network cables, network switches and computers with no change.
I thought before I give up on Roon completely and just listen to the Bluesound App, I would give OS 11-Big Sur a go, as I received an email from Roon Labs stating “So far, we’re pleased to say everything is fully functional and we haven’t identified any compatibility issues”.
That seems to have eliminated the snap, crackle and pop issue!