There is a relay in Lumin D2 for PCM / DSD switching. If you stand close to the unit you may be able to hear the relay clicking, which is normal.

That switch sounds is a little different what you describe and I noticed that as well.

The soft click really comes from the speakers, audio signal. It is also persistent when skipping thru DSD tracks, so not changing to something else like FLAC or MQA. Do not know if that matters. I have all settings on native.

The D2 is hardwired connected and I use the balanced analog outputs into my McIntosh MA7900. Roon runs on a i7 8GB desktop.

I am converting a couple of iso’s again now with the latest version as suggested by Slavisa, will report back if that helped.

Secondly I will install minim server and try the same tracks thru the Lumin app. Listen if that makes a difference.

OK, I narrowed it down to roon and Lumin as combo.

Reconverting the iso files with the latest sacdextract version did not change anything.

After installing minimserver and playing the same tracks via the Lumin app and minimserver, the clicks are gone.

Just to confirm, yes I hear the relais click as well, but there is a soft click in the audiosignal.

Something is not behaving between Raat/roon and Lumin.

How can I further troubleshoot or fix this.

Lumin app plays your whole album as a single track / gapless if the audio format stays the same. If Roon actually stops a track and then starts another, that involves additional DSD / PCM transitions which imply relay transitions.

If Roon actually stops a track and then starts another

I don’t mean that. 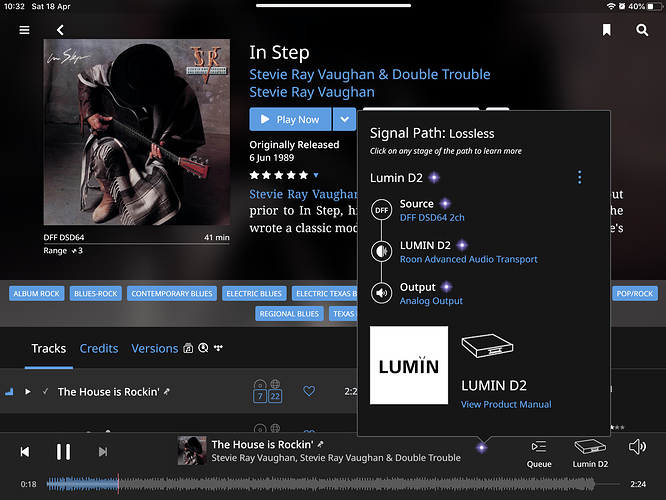 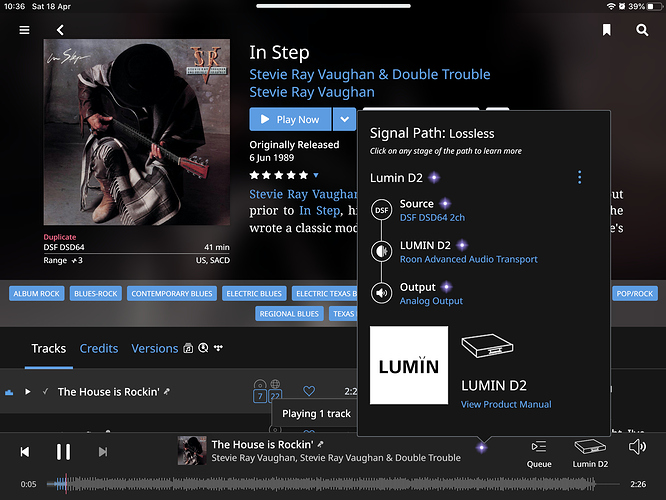 I tried to convert to dff as well as you can see in the first screenshot. The same result.

I could provide the track as in the screenshot. Is the smallest and I use that track to replicate here as well. Size is just under 100 MB.

The gapless remark gave me an idea.

Did the following. Skipping thru tracks creates the clicks.

Letting the tracks run, so as in listening to a full album does not produce a click at the beginning of the track.

Letting the tracks run, so as in listening to a full album does not produce a click

so then no problem

btw, it’s always better to extract to DSF so you can edit tags

This sounds a lot like the bug that I reported - sadly still no fix. It remains my only (minor) gripe with the D2.

I still think it is a problem, although not a major one.

Basically hit skip equals click. Think we already much narrowed it down where issue is.

Is this roon or Lumin or a combo? As already stated playing the tracks thru Lumin not using roon has no clicks.

@dhusky yes, your issue is the same. For me and I think in general it is not only between changing between different file types. Think there is just something not playing nice when starting a DSD track using forward and back and it is not so much switching between file types, but that is my guess.

Flagging support. Maybe there is something in log files or diagnostics they can check. Leave that to support what to do. @support

Because it triggers the relay.

Flagging support. Maybe there is something in log files or diagnostics they can check.

I have a lot of confidence in Lumin and Peter’s commitment to fixing issues when they arise - assuming our issues are the same (and I’m not totally convinced), I am fairly confident that if it were fixable @wklie would have already done so. Would be delighted to be proved wrong though!

True, the presence of Peter and his responsiveness here was also one of the considerations choosing for Lumin. Shows that they care. As mentioned is not a huge issue, since only approx 300 DSD albums are in my library and after that click they sound great, so I am happy with my D2. Just hope that down the road there will be a solution.

Flagging support was just helping from my side. Maybe they see something that saves time or helps, that is why I offered that.

Peter. Are you saying that the relay could cause that click? The click is exactly as you confirm in the thread of dhusky. Coming from the speaker and yes it is not loud, but I have bat ears

Coming from the speaker and yes it is not loud, but I have bat ears

FWIW, you might need bat ears over speakers but by headphones it is very obvious…I probably wouldn’t be that fussed otherwise.

could be related to output stage design.
when relay is triggered this cause short DC pulse on output?