Can you please ellaborate and document your issue somewhat clearer

Here is a picture of a queue, containing tracks from my Library.
If I click on the 3 dots at track level, I clearly have the possibility to add the track to a Tag. 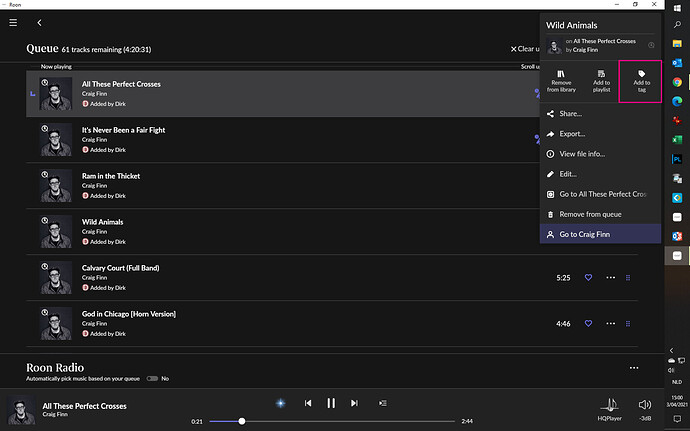 I tested a Qobuz playlist as well, and I agree that the ‘Add to Tag’ is greyed out, even for tracks in your Library 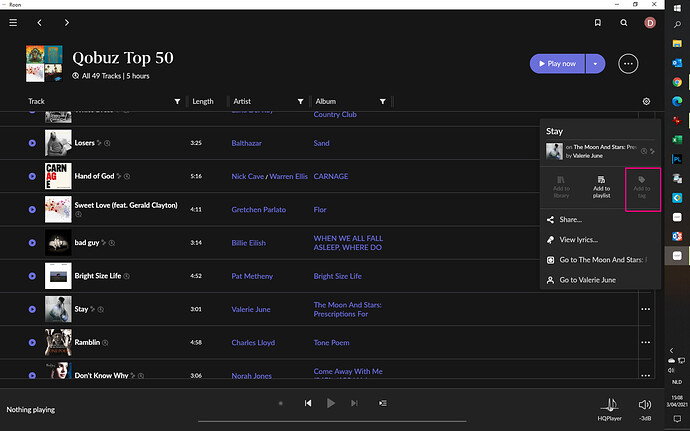 (Playing from a playlist that was copied from a Qobuz playlist.) 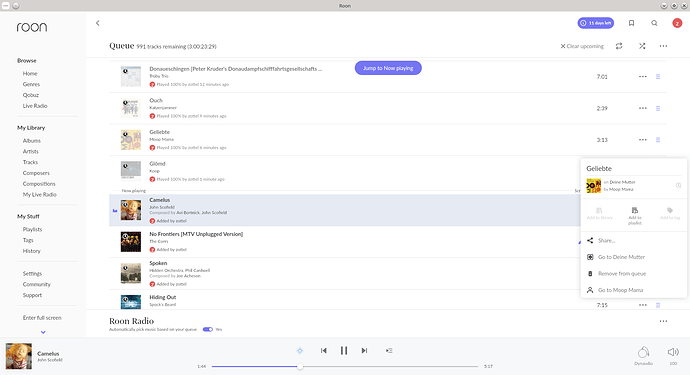 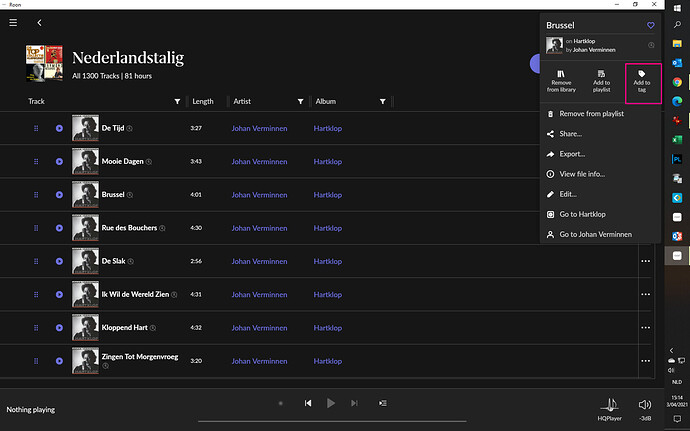 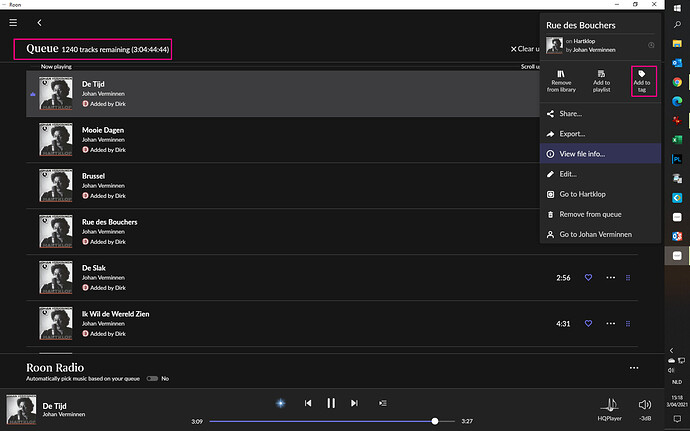 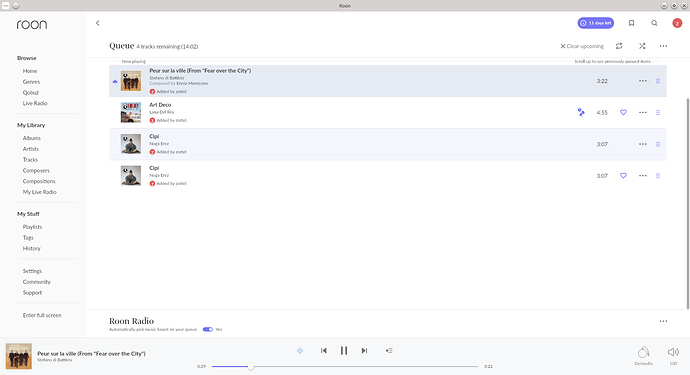 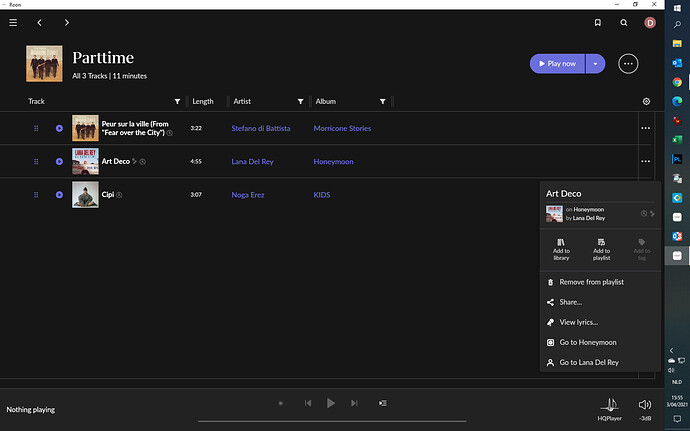 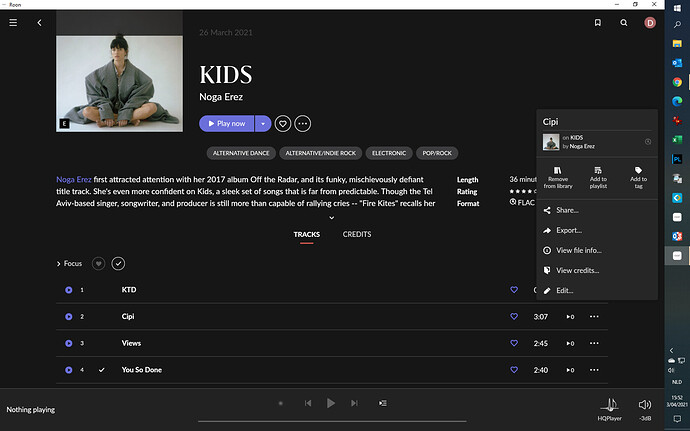 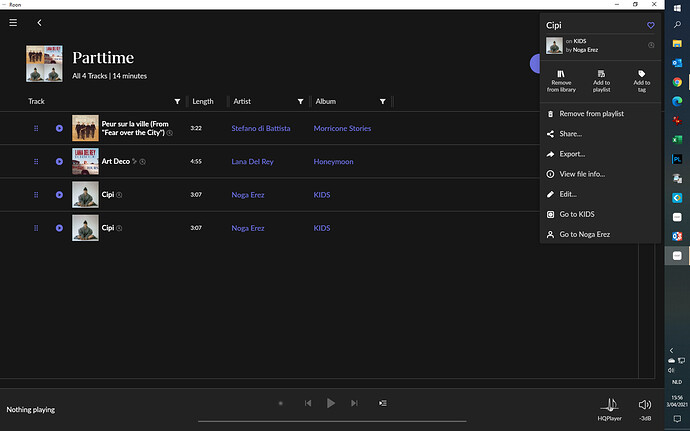 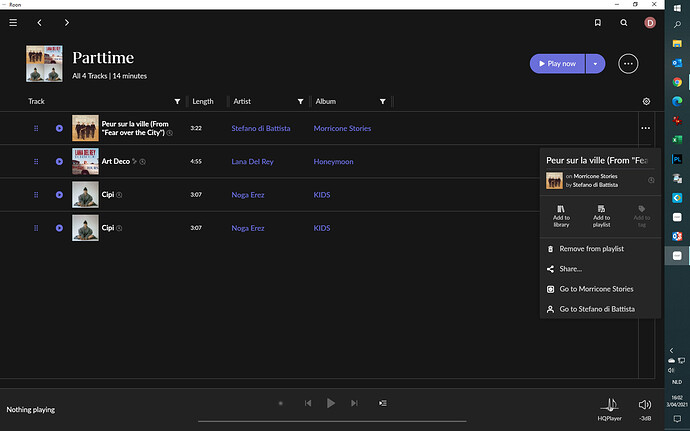 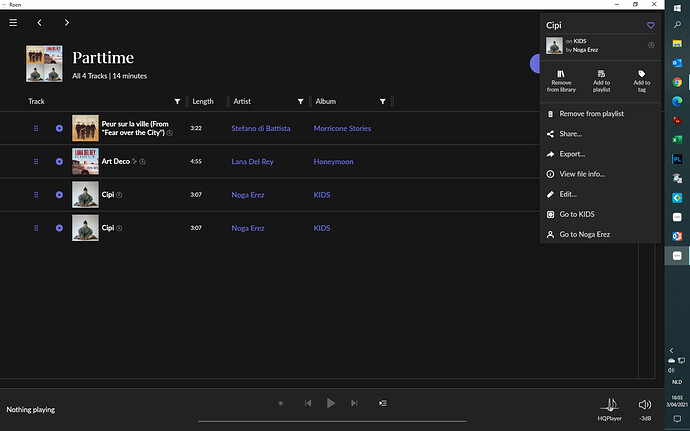 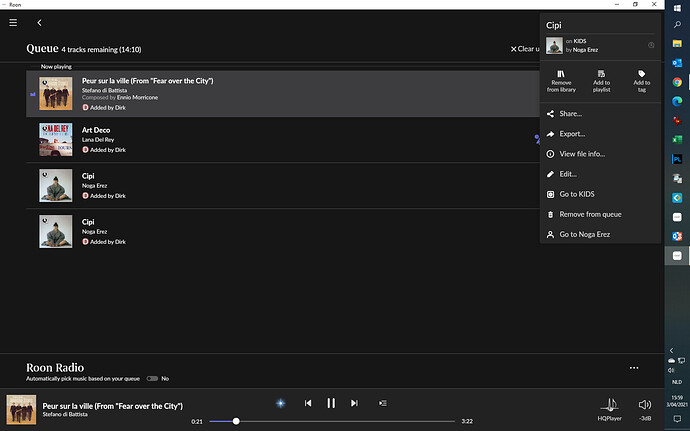 Why isn’t there a “Replace external tracks with local tracks” option?
Roon could even use downtime to do matching between the two so it would always use a local version if it’s available.
If you can search external databases for song versions, which Roon does, this shouldn’t be impossible.

This might also clear up the “This track is no longer available on Qobuz/Tidal”, by either deleting the track/album from our libraries, marking it clearly as unavailable, replacing it with a library copy, or segregating it to a special place in Roon where orphan tracks can be reviewed.

@zottel You are right. If you add a track from within your Roon library to a playlist, then and only then, it is the library version that gets added. So, if you are still building your library, a thing you can do goes as follows. You make a local copy of a Qobuz playlist. In it will be non-library versions of the tracks. You add them all to your Roon library. You go to My Library > Tracks. You arrange by date added. You select the ones that you have just added from your playlist. You Add them to a new playlist. Here you have your Qobuz playlist with library versions of the tracks in it. After comparing and checking, you can delete the playlist with the non-library versions.
There are two things that make this extra complicated.
(1) If some of the tracks in your Qobuz playlist, were already in your Roon-library before (e.g. because they are also in another playlist you already imported and added to your library), then those tracks will have another “Day added”, so it will be more difficult to find them under My Library > Tracks
(2) Adding a selection of tracks or all of the tracks in a playlist to your library, can only be done one by one. There is a bug (probably) that makes that if you select non-library tracks in a playlist and you go to the three dots in a circle on top, and you then choose “Add to library”… it does not happen. It does not work. Technical support is aware of this possible bug and has passed it on to the team to investigate. Can't add all selected tracks to library

PS: For Tidal users, the procedure is slightly different (and more complex).

@Francois_De_Heel Thanks for the tips. However, there is another problem: If tracks in the playlist were in Qobuz favourites, they will already be in the library.

I like @Andrew_Webb 's suggestion to implement a command to replace all non-library links in a playlist with library links where possible. I would add that this should also take into account album versions that have been grouped and always use the preferred version.

In my library, I have many low quality tracks that I ripped some 20 years ago when sound quality wasn’t an important topic to me. It’s important to be able to tell Roon not to use those, or generally a higher quality Qobuz version of the same track, but also to have control over when a local version should be used, and when it should be a Qobuz version.

And, of course, as I haven’t grouped all albums yet that I will have to group over time, and will also re-rip many of my CDs, it’s important that such a feature would allow a re-run whenever required.

Thanks for the tips. However, there is another problem: If tracks in the playlist were in Qobuz favourites, they will already be in the library.

That’s the same extra complication we have in Tidal. I did not know it was also the case for Qobuz. So yes, this makes it extra complicated. You would need to “de-favorite” tracks in a Tidal/Qobuz playlist before following the workaround procedure. And if you have overlap between playlists (same track in different playlists), it might at some point drive you completely insane to try to get library tracks and library tracks only in your playlists.

I like @Andrew_Webb 's suggestion to implement a command to replace all non-library links in a playlist with library links where possible.

Several people seem to want this “replace by library version” functionality for tracks in playlists suggested by @Andrew_Webb (@Seabreeze, @LaurentZ, @Gafflyn, @Jack_O_Donoghue, @killdozer). See in this thread also: Solve the library/non-library conundrum and all the complexities it creates for tagging, focus, playlists etc - #6 by Francois_De_Heel

I would like to check if there are also people who see disadvantages connected to adding such a feature?

Can I summarize this thread so far as follows?

These two things will not solve everything for everyone (like for instance two-way sync or the 10K Tidal limit). But it will help Tidal/Qobuz/playlist users a lot without diminishing or even changing possibilities for others. And it would create a lot of happy Tidal/Qobuz/playlist users because, after that, they could fully enjoy the many possibilities Roon offers (tagging, focus, hearts, etc).

My question for the Roon team (@brian, @dylan). Is there any chance that we will see this improved functionality for Tidal/Qobuz/playlist users anytime soon? Are you (planning on) actively working on this? Or do you choose not to, because you prefer to wait for a thoroughly rethought structure where the library/non-library silos are abandoned altogether?