Some Zones subject to "Network Error"s: B537 [SOLVED]

Network Details
Network (and audio gear) diagram attached below. This problem centers on my wired CAT 6A connected Mytek Brooklyn Bridge (BB). Though for testing purposes I’ve confirmed the problem persists if the BB is wifi connected also. Network is primarily mesh Eero Pro V2 routers. When the error occurs, I have documented - at the same time as the error - wired download speeds around 300 Mbps, and wifi speeds from 120 to 220 Mbps.

A QNAP TS451 NAS is on the network, with all my local music. But this error occurs when playing local music off the NAS and also music from Tidal or Qobuz. 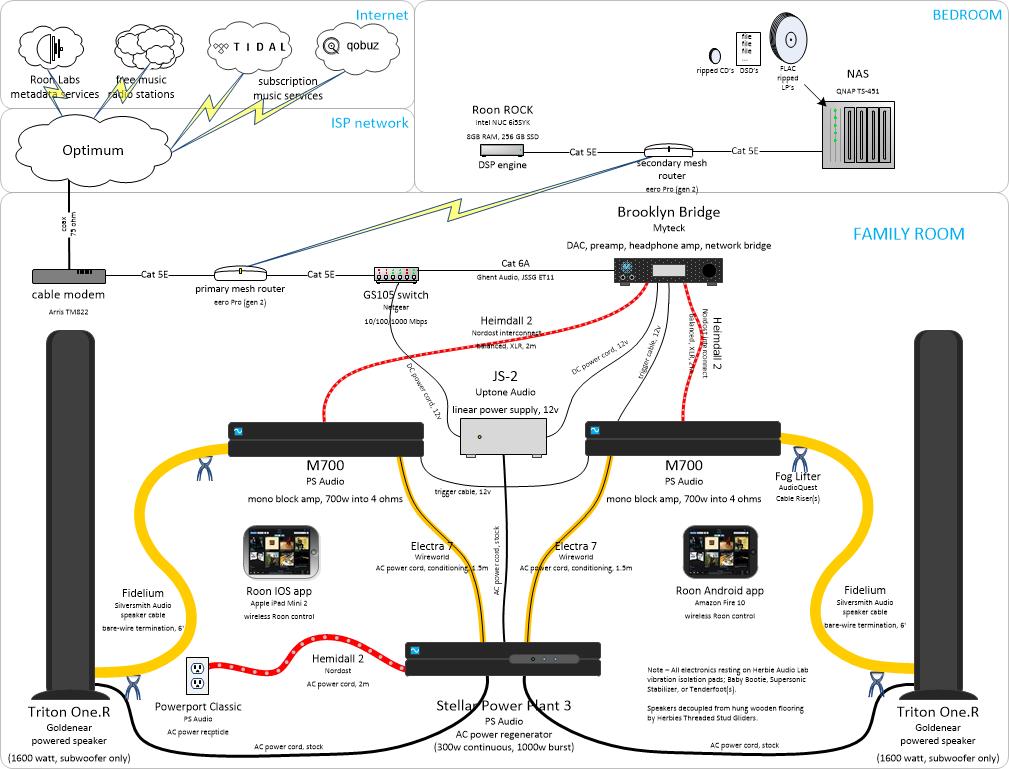 Audio Devices
The primary audio device is a Mytek Brooklyn Bridge (BB). The problem occurs if it is connected to Roon as a network endpoint, via CAT6 cable. It also occurred on a single occasion when a Sonore Sonic Orbiter SE (SOSE) was attached to that CAT6 cable instead, with the SOSE connected to the BB via USB.

Description Of Issue
Some of my Roon Zones have started generating network error messages, indicating that songs are downloading slowly. When that occurs, Roon frequently skips to the next song in the queue. And once this problem starts, it does it very frequently. Every minute or two. The specific error messages vary, depending of the source of the music being played. If playing music from my NAS, its:

An audio file is loading slowly. This may indicate a performance or hardware problem.

If playing music from Qobuz or Tidal its:

Qobuz (or Tidal) media is loading slowly. This may indicate a network or connectivity problem.

Not all of my zones are affected by this. When Roon plays music to - or through - either my Win10 laptop, or iPad, or iPhone, or Kindle Fire Tablet, there is never a problem. And as mentioned above it happened once to my Sonore Sonic Orbiter SE (SOSE) while testing. While the BB generates these errors when connected by Wifi or hard wired, I don’t think that it’s a network problem. Because, after many, many hours testing (days actually), I can state the following.

This does not seem to be consistent with network problems. The other devices should be having them too, but aren’t.

And it’s not dependent on what kind of control I connect to the offending zones with, be that control an iPhone, iPad, Kindle Fire, or Win10 laptop. As long any of those Control devices are playing music to my BB as the network endpoint, I get the error messages. So it’s not Control platform specific. Nor Control software specific, as there is a wide disparity of Roon builds running on those various devices.

Until this is resolved, I have a really unfortunate workaround… put my Win10 laptop in the stand, use it as my Zone, and USB connect it to my BB DAC.

In the above diagram of my network and audio gear, there is no SOSE. It was attached to the CAT 6A Ethernet cable normally connected to the BB. And it output to BB via. USB. This was done just for testing.

I’ve got a support ticket into Mytek, but it’s moving slowly. And I can’t honestly say that I know this is Mytek’s problem. Remember the SOSE’s one instance? So ANY support/help I can get here will be much appreciated.

Thanks for the detailed report, much appreciated!

it happened once to my Sonore Sonic Orbiter SE (SOSE)

How often do you play to this device? Is it used frequently?

The main reason I ask is that the “Media loading slowly” error can stem from a variety of issues. A temporary network disconnect could cause something like that, so it would be helpful in understanding if this device is affected to the same level as the BB.

@dylan thanks for the prompt reply. Happy to provide all the detail. The fear being providing too much, and confusing things. Hopefully not the case here.

I haven’t used the SOSE in years. I pulled it out yesterday because no matter what I did, I could not get any other device (acting as a zone, aka endpoint) to repeat the problems that the BB had. So it seemed like the perfect opportunity to see if my problem with the BB was associated with it’s built in network endpoint, or if it was with the DAC. It also provided a GREAT opportunity to say it’s NOT network, if while plugged into the BB’s Ethernet cable, I could not duplicate the problem. Unfortunately I did have one, brief network error with it.

Thanks for the support folks. I’ve gotten PMs on top of the reply above.

Pls put any efforts to help on hold until I’ve had many hours to feel comfortable that the solution that I think I’ve found is not just a transitory effect. But for now, it’s working.

Cutting to the chase, it’s fixed. Thanks for the help. Really (I got PMs helping too). I love this community.

Next post I’ll explain just what happened. Where I messed up. And what I’ve learned.

Well last night, I wanted to hear some tunes before going to bed. So since the SOSE had only had this problem once, and the BB MANY times, I hooked up the SOSE, and hoped for some uninterupted tunes. No such luck. It was non-stop network errors.

Knowing that none of my hand held devices had had any problems at all, being desperate for tunes, I plugged an Apple Camera Adapter into my iPad, and plugged that into the USB input on the BB. And guess what? Network errors! That was a first.

So I pulled out the Kindle Fire, it had never had any problems either. But not now. Oh no. Non-stop network errors.

I was baffled because I had convinced myself that this was not a network error - in part - because none of my handheld devices had had any problems. And I played them many hours. But having that problem now, I was forced to recognize that while I had no explanation for why devices that had never had problems were now having them, all the same, this did indeed look like a network error. Or maybe a problem with the ROCK NUC.

So I rebooted the ROCK. No change. So I rebooted the router that the ROCK connects to. When it rebooted and the Core was available again, network errors were GONE on the Kindle Fire. So I switched back to the iPad connected to the BB. Gone! So I switched the BB to taking input from the network (wired). Again, network errors gone. I was thrilled. Until 20 minutes later, when they came back.

So I rebooted the router again. Gone. Now repeat this for two more consecutive roughly 20 minute error free intervals, only for errors to come back, until I rebooted again. Now comes the part I’m ashamed to admit…

I didn’t look at the router until this morning. It’s in my bedroom, where my wife was sleeping. But in the light of day this morning, I took a look at my router, and was so ashamed.

It was covered by a pile of bills that I had placed there about four days ago. Where’s that icon of a hand slapping your head when you need it?

So… what have I learned?

As a career IT professional, did I think to reboot everything in the data delivery chain? No. Should it be necessary? I’m used to thinking no, not necessary. And I’m going to cut myself a wee bit of slack on that point. I’m used to working with many tens of thousands of network nodes. When we have a possible network problem at work, do we reboot every network component? Well, no. Not unless you want to lose your job. But was it needed in this case? Absolutely yes.

I need to wrap my head around the fact that for home networking different rules apply than those of corporate networking. I guessing that I’m not alone in this community on that point. You know who you are…

Thanks for the help and attention.

I’ve been following the troubleshooting saga and great work in finding out that the router itself was overheating! Intermittent networking issues are the hardest to track down, but seems like you did a good job of locating this one

Thanks @noris. It was a slog.

Upon reflection I realized the biggest mistake I made was in not - very early on - rebooting everything in the data delivery chain between the offending node (the Brooklyn Bridge) and the Roon Core device (ROCK NUC). And also every device in the chain between the Roon Core, and wherever it was getting its music from (NAS and “the cloud”). That would NOT have shown me which device was the problem, but it would have shown me that it WAS a network problem, and I’d have not wasted days messing around with different Roon endpoints.

My messing with Roon endpoints was a misguided attempt to save myself from the potentially insanely long process of tracking down a network error. That would have meant systematically swapping out many, many network components (cables included @Rugby) one at a time, and listening for many hours to confirm stability, before moving on to the next component to swap out.

When in actual fact, a quick reboot of most everything would have clearly demonstrated that it was indeed a network problem, and saved a lot of time.