Hi,
Things going well with Roon and HQ without Tidal till they understand the crashes, but now, my Mac defaults to Sonic Stream ( I disabled it from Roon) and even after multiple reboots, it switches to Sonic when I start a song on Roon.

I was actually just working on the fix for your TIDAL crashes a few minutes ago…a build with the fix is going into alpha testing in the next few hours.

I have a guess as to what’s going on with this.

When Roon takes exclusive control of X, The Mac is no longer able to use it as the default output, so MacOS picks another sound card and makes that the default.

This is expected behavior when using the same sound card as the default device in MacOS + also as an exclusive mode device in Roon.

Hi Brian and thanks for your help.
I have disabled SonicStream. When I boot up the Mac, it defaults to the Ayre DAC in Sound preferences and Audio Midi. As soon as I want to play from Roon and HQ, it jumps to the Built In Output and I can’t get it back to the Dac.
This is a new problem… it was fine till yesterday.
Any ideas? Should I now uncheck the Exclusivity Mode in Roon?
Thanks as always
Bernard

I overlooked that you are using HQPlayer. When using Roon+HQPlayer, HQPlayer owns the relationship with the audio device.

You should actually disable that device within Roon if you are using it with HQPlayer. It probably is not causing any problems, but configuring two apps to have exclusive control of the same device is asking for trouble.

I suspect that HQPlayer is grabbing exclusive control of the sound card, and not letting go, and that is why you can’t get the OS to control it any more.

If you exit HQPlayer, can you set the Mac back to the Ayre DAC?

Yes Brian, when HQ and roon are not activated, I can switch to the Dac.
Not sure what to do about it though… I’ve changed nothing in my roon preferences recently…
regards

What if you leave Roon running and just exit HQPlayer?

What I am trying to confirm is that HQPlayer, and not Roon, is the program holding on to the DAC. I think that is the case, but am not 100% sure.

Roon does some careful things to release control of audio devices promptly when you are no longer using them. I worry that HQPlayer is not doing the same. If that is the case, this might be something to take up with them.

But first, lets confirm that it is actually HQPlayer holding the device.

Will try it when I get home from work and update you. I understand we’re trying to eliminate the variables that might be causing this.

I had two more thoughts about methods that might cause HQPlayer to release the device:

This causes Roon to disconnect ways with HQPlayer until the next time you start playback. Once they are disconnected, there is really no reason for HQPlayer to still control the sound card.

I’m hoping that one of these will get your sound card released, so you won’t have to take this up with HQPlayer.

First: Played roon without HQ. Selected Ayre as my zone.
Roon plays through the dac but strangely, audio midi does not defauly to the dac but keeps the built in device,
Second:
No Roon, only HQ: no sound; midi defaults to HDMI; when I quit HQ, midi defaults to the Ayre.

Third test:
I restart Roon and HQ.
I choose HQ as my zone.
On Room, when I click on the speaker icon, it says: Volume Control is not available and the link is broken.
The dac shows the sample rate but no sound. Midi has defaulted to HDMI.

First: Played roon without HQ. Selected Ayre as my zone.
Roon plays through the dac but strangely, audio midi does not defauly to the dac but keeps the built in device,

This sounds right to me.

When using HQPlayer, HQ owns the sound card (Roon’s audio settings for connected devices have no impact on this configuration). This means that all of the device configuration happens on the HQ side. Which device did you select in HQ?

The dac shows the sample rate but no sound. Midi has defaulted to HDMI.

This sounds like the same behavior as when HQ was playing without Roon, which makes sense, since HQPlayer owns the relationship with the sound card.

I think there is something amiss with your settings in HQPlayer.

Mind if I send some screen captures? 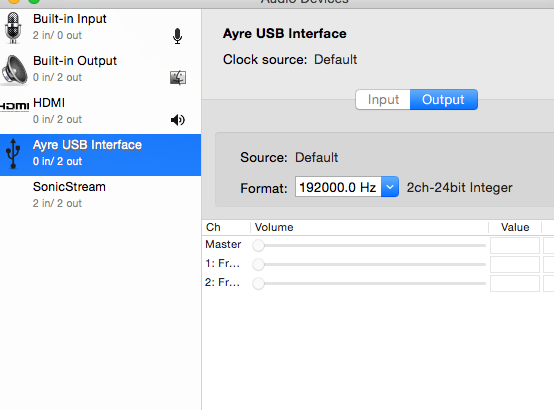 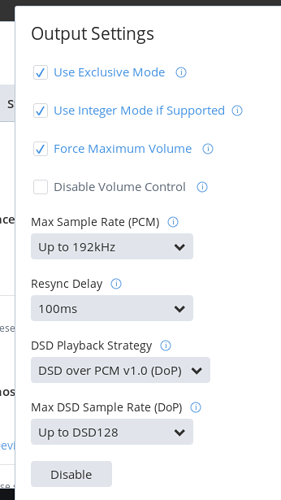 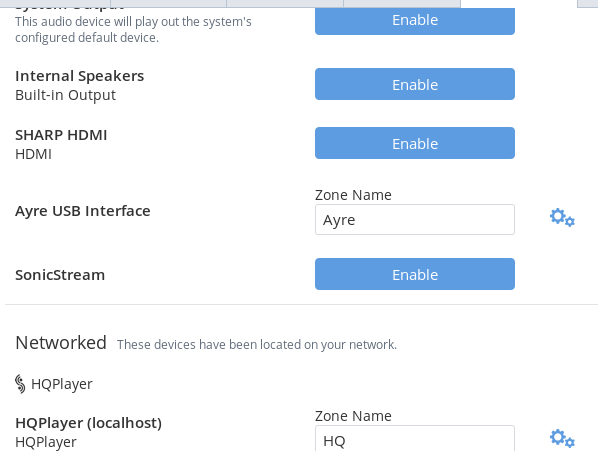 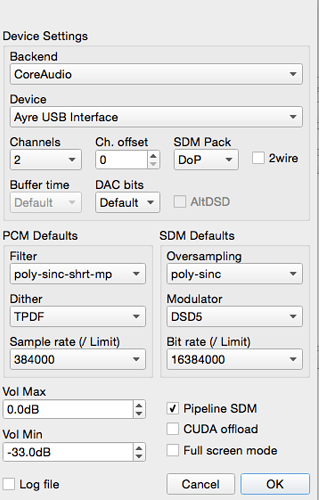 What am i doing wrong and what changed from Sunday to Monday??

It makes me a little bit uncomfortable to see the same device enabled in Roon + HQPlayer, in exclusive mode, at the same time. That feels wrong to me, but probably isn’t causing problems unless you’re actually trying to use both to do playback at the same time.

Having your default device switched by MacOS when an app opens it in exclusive mode is correct behavior.

But the more we discuss, the more it becomes clear to me that this issue is somewhere between HQPlayer and MacOS. When using Roon+HQPlayer, Roon isn’t doing stuff with audio devices at all–HQPlayer owns that piece.

The experiment you did earlier showed identical behavior when using Roon+HQPlayer vs HQPlayer alone–the fact that you experience the same behavior with Roon in and out of the picture suggests that Roon is not the source of the problem.