I have a Roon ROCK (NUC7i5BNH) connected directly via USB cable to my Sony TA-ZH1ES DAC/amp. The Sony is capable of decoding native DSD, but Roon doesn’t give that option, offers only DSD via DOP. 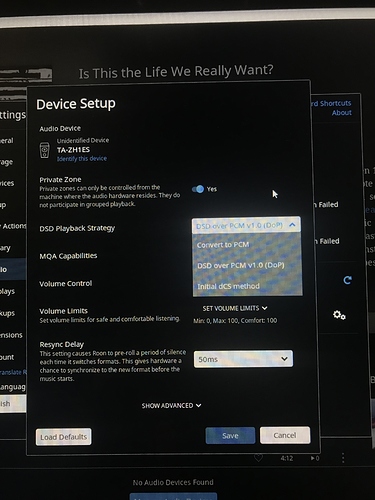 What might be the problem here and how to solve it?

DoP is DSD. Do not worry about it. You are not going to get native DSD output from Linux.

As far as I am aware, Sony USB DAC devices do not support native DSD when connected to a device running Linux based operating systems. The only way to play native DSD to a Sony USB DAC is to use the Sony driver on Windows.

Got it. So the only way to get it native is to use their DAP as server and forget about Rock. Too bad…

You can connect it to a Windows or Mac to get native DSD.

Sure, but that beats the purpose of a Roon ROCK, right?

Well really it’s your device that beats the purpose of ROCK.

Have you got it connected to a Linux box via USB, that is what the original poster has a problem with.

Some manufacturers have gone to the trouble to make their product work natively in Linux. ROCK is normally patched to accommodate these so some devices will work natively. Sony have not done that work. And in their minds the effort required is disproportionate to the majority who use Windows or OSX.
I run two DACs right now, a PS Audio Nuwave DSD where that work has been done, at least to Sonore products, and an AudioByte Black Dragon where that work has not been done. I still prefer the BD via DOP to the PSA native.