After reinstalling a fresh version of Roon and backup data, I see that the usefulness of Date Added sorting has been rendered meaningless. I am guessing this wouldn’t have happened if the most recent backups that I had made of Roon were fine, but I I discovered the most recent backups where corrupted, ie, backups from August and July were both corrupted enough so that Roon wouldn’t open. So I was forced to use an earlier backup from May 15, which worked fine, and allowed me to open Roon, but … pretty much ravaged the order of data added sorting. In fact, I’m not sure I see any particular similarity now in sorting by date added, which leads me to ask, how does Roon added files that are newer than the last backup? And I was wondering why Roon can’t look at the storage device that is adding files from and use “date added” on that storage device to attempt to rebuild a more similar “date added” ordering to the one I had. Could Roon re-scan the music files and place them in the order would on my storage drive? I ask that because the date added sequence on my storage device does follow the order that Roon displayed before this problem occurred, and would be far far disorienting when recovering from this kind of problem that I have experienced.

For one thing, having the correct sorting by data added immediately allows a user to find the must recent version of Beethoven’s Piano Sonatas that one has purchased quickly and efficiently. And for someone who is a musician, it allows for a person to add two versions of the same musical program, say two different versions of the Sonatas, or Goldberg Variations together so that one can easily move back and forth when studying. In fact, there are a whole lot of creative uses of being able to customize one’s own additions to the library by using sort by date added. I am just wondering, since seeing this most recent problem and fix has left my date added sort feature rendered useless, now that the restoration of albums to Roon when viewing by data added has rendered out of sink with the actual addition dates, if you might consider adding the ability to have Roon add music back to Roon by following the date added on the storage device. I realize that might be other issues that aren’t fixed by this procedure, but it would certainly help enable me to restore the actual sort order that I had before this corruption occurred. Could you rescan the storage device and have Roon re-order the additions by importing in order according to data added to the storage? That would be such a big help in removing the frustrations that occur when backup is also corrupted as my August and July backups were.

Sorry to sound like (be) such a dunce here, but does re-installing simply replace the one that’s there? You’re suggesting setting for Import to by file creation date , and then going directly to Backup and doing it over? I didn’t see that i had an import setting. Fastastic! I will go try that. Thank you so much.

I don’t thin no you have to retire a backup. I think you can just reanalyze the files. Try it with one album to test.

What does it mean to reanalyze the files? What would be the steps to try, as you say, ranalyyze the files? I thought, I’d have to rerun restoring that backup again after changing that setting to file creation date as the import tag. But if I don’t have to do that restore again, what is involved in your suggestion to try reanalyze the files? Where do I go to do that? To someone who has not done that, it’s not obvious what the procedure is.

Well, I just tested it and as soon as you select the option save; it automatically applies it to the whole library.

What does it mean to reanalyze the files?

What Daniel means is that as soon as you have changed an import setting on the Library Import Settings page (in Roon , go to Settings > Library > View Import Settings), Roon will re-evaluate the data from your files and then apply the updates to your library. There’s more information on this in the KB article on Import Settings.

There’s more information on this in the KB article on Import Settings .

Geoff, grateful to you and Daniel for your help.

Going to backup now more than once a month as I not only am adding music quite a bit, and also indulge myself in playlists quite a lot. I did lose some of my playlists, but I am so happy that file creation date enabled me to reconstruct data added as i do use it a lot when learning compositions to readily have some albums together. I don’t know how many people would find it valuable, but it crazy people like myself who compare performances a lot who don’t add music the way I do, and who haven’t added music with that in mind might like a feature for comparing artists renditions of the same pieces, though I suppose the same thing could be done by searching for something like Beethoven String Quartets. For me that search would be better if I could search for two artists at a time, or in the case of the quartets combine a search for two quartets, say Takacs and Quartetto di Cremona, or say Bernd Glemser and Wilhelm Kempff. Of course, most people aren’t actually comparing performances so much, but it would be an incredible feature to have at one’s fingertips if you are studying music, not simply enjoying it.

Anyway, thanks ro you and Daniel . Thanks for taking the time and clarifying. Also grateful to Dylan and Nuwriy for their clarifications too.

This feature exists. Have you tried the composition view?

For example, you mentioned the Beethoven Sonatas. I can compare 40 versions of No. 8 from my own library and almost 2,000 from Qobuz. Many of these versions I didn’t even know I had as they are tucked away in compilations and box sets. 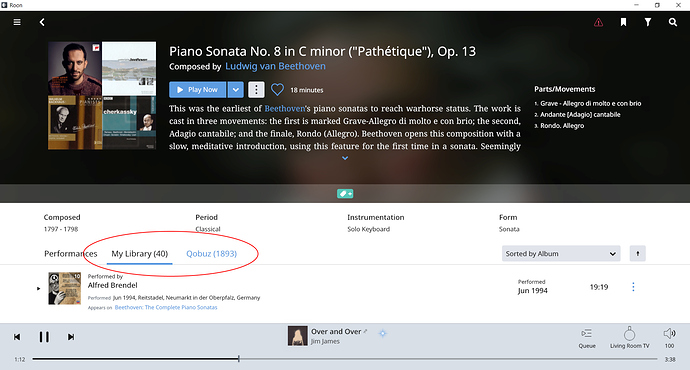 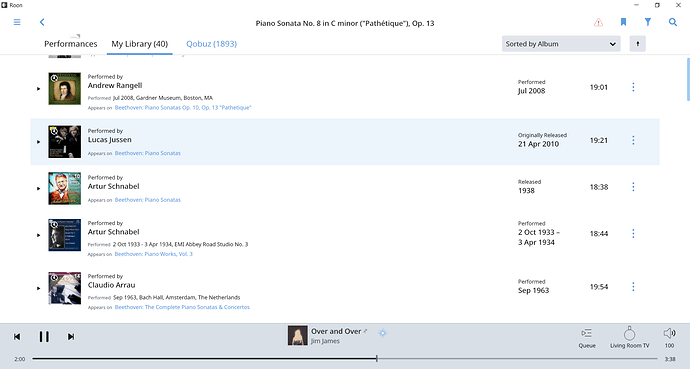 In order for this to work you need to spend time identifying the individual compositions in your library. It is not enough to identify at just an album level. This may be more work than you are prepared for as roon will not necessarily do this automatically for you and you will have to chase down composition catologue numbers etc. so that roon can make a composition id.