I am experiencing what I consider some weird behaviour in the Roon software album view. Some background, what I wish to do is sort my music in the same way that (good) record stores do, which is that they put bands and related solo artists in the same folder. See the related thread here:

In a good record shop, when I look for what they have under The Rolling Stones, they will also have in that same shelf whatever records they have by Mick Jagger or Keith Richards. Same for Beatles with Lennon, McCartney, Pavement with Stephen Malkmus, Oasis with the Gallaghers etc. etc. So, this is what I would like to reproduce in my Album View. I would browse through the letter B, reach the Beatles and find attached, as it were, Lennon and McCartney solo records. Of course, I would like to se…

Unfortunately, Roon offers no straightforward way of doing that. Now, as a workaround, I have edited albums manually. As per my example (see image file), since I wanted albums by THE BAND do be followed directly by any albums of their members, I manually put THE BAND HELM as the Album Artist of Levon Helm’s album “Dirt Farmer” (Levon Helm, of course, was the drummer of THE BAND and therefore, in my mind, needs to be connected as closely as possible to THE BAND in my collection).

The weird thing is that, the sort order that comes out of this is first (!) THE BAND HELM and then (!) THE BAND. Why?? I am seeing the same behaviour with what I did in reference to Crosby, Stills & Nash and David Crosby solo records. I want Crosby’s solo efforts to appear after the band’s records. So in David Crosby’s solo album CROZ I put as album artist “Crosby, Still & Nash Crosby” (I know it is particularly silly in that case, but hey, it is a workaround

What happens is the same thing as with THE BAND and Levon Helm, i.e. the solo record appears before the band record although the alphabetical order should suggest otherwise.

I am not (!) seeing the same behaviour with THE BEACH BOYS and Brian Wilson solo records. Here I put, as an album artist “The Beach Boys Wilson” for Brian Wilson’s SMILE record, and it works perfectly.

I really have no idea whatsoever why this is the case. Any help?
@support 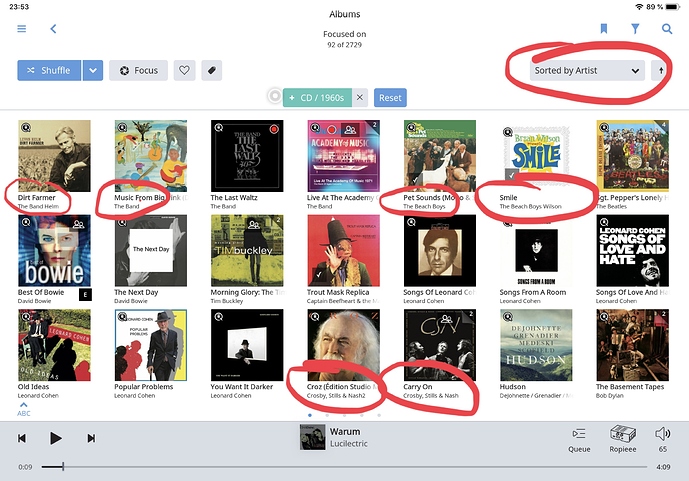 I’ve passed this along to the team for investigation. Thanks for the report!

Does the same apply to albums which are not streaming based?

Thanks everyone! I have experimented further with this and I think I found out where the problems come from. I found that the problem occurs only when whatever I add to the band name begins with a letter combination further down in the alphabet than the word THE. I know this sounds awkward, but this is what I found. For example: If I put THE BAND HELM, this entry appears before THE BAND. If I put THE BAND WILSON, this entry appears after THE BAND (I know nobody called Wilson ever played in THE BAND, but bear with me). See in the pictures the examples for THE BAND TG and THE BAND TI respectively. My guess is that this has to do with the fact that, in order to sort correctly, Roon transforms THE BAND into BAND THE. Now, when I change the entry from THE BAND to THE BAND HELM, the software transforms this into BAND HELM THE. This, of course, appears before BAND THE (–> H before T). THE BAND WILSON on the other hand, is read as BAND WILSON THE, which appropriately appears after BAND THE (–> W after T).

Anyway, so I understand now where the problem comes from, but if I’m not entirely mistaken, this is not how it’s supposed to work, right? Forget my idiosyncratic problems for a second and just Imagine some genius forming a band called THE BAND B. This new band should, in a correctly sorted alphabet, appear after (!) THE BAND. Right? It should not matter if it’s THE BAND B or THE BAND K or THE BAND X. They are all adding something to THE BAND and should therefore come after. The way it works now, THE BANDS A-T appear before THE BAND while THE BANDS U-Z appear after.

Can you fix this? Or suggest a workaround for me (I tried using punctuation between THE BAND and HELM, but nothing seems to work …)?

Well, I suppose if high end record stores had hyperlinks like Roon does the records wouldn’t need to be physically clumped together. You look at information on The Band and clicking the Levon Helm hyperlink would instantly move you over three aisles. If you were looking at CSNY and clicked on Neil Young it would move you to the other side of the store.
But the high end record stores don’t have hyperlinks like Roon. Too bad. They’ll just have to go old school and clump them together, expecting everyone to know that Levon Helm is next to the section The Band and not under Helm.

Hmm – of course Roon is more versatile than any record store could ever be. I am also not suggesting that what I want as a sorting order should be the Roon standard behavior. Others will want their Jagger under J and their Stones under, well, R. But the option to click something like “File Under” would be nice for people like me, who want their Sun Kil Moon records appear next to their Mark Kozelek records and their Bonnie Prince Billy next to Palace Brothers. Also, full disclosure, I want to use Roon also as a kind of database for my real-world physical collection. And that doesn’t work with hyperlinks.

In any case, while I am aware that my wishes may be special and I am willing to use some workaround, the sorting issue remains weird for everyone …

Nah, its a good idea. It makes good sense to be able to present albums a certain way when there are relationships you like to see kept. There’s gotta be a way, with tags probably.
I am obviously lazy this way and just let Roon do the heavy lifting.

Have you tried adding a delimiter in the name, e.g. THE BAND, HELM and THE BAND, WILSON?