Sound cuts out above DSD64 with exasound PP

Hi, just tried the DSP for the first time with my exasound PlayPoint using Roon Core and the DSD 128 would not work; playback would cut out. I tried adjusting the headroom to -4 with no change. Is DSD64 the highest the PP will handle or is there some other adjustment needed? 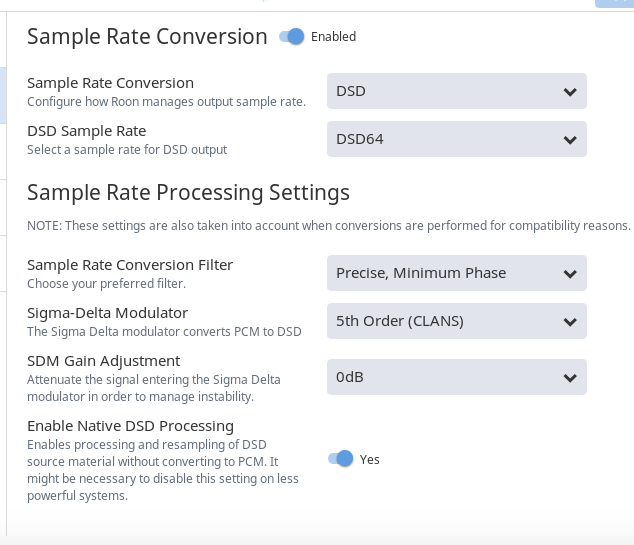 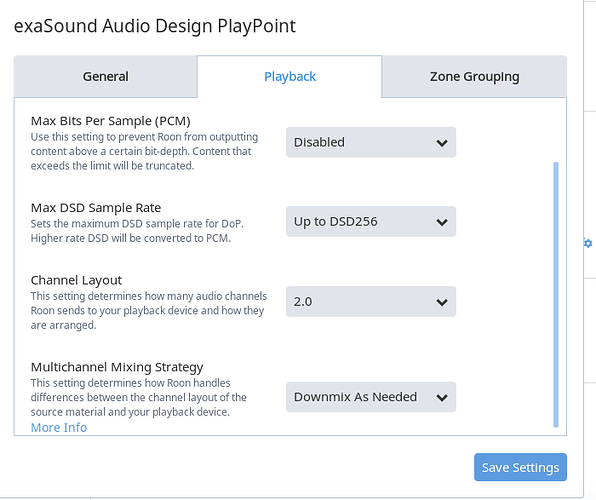 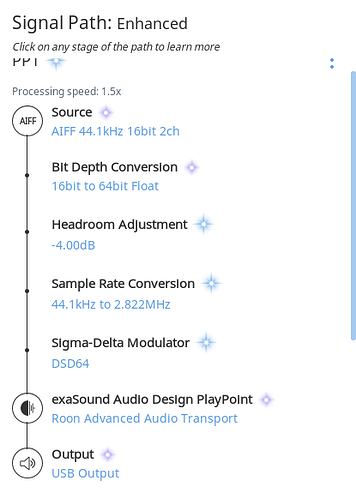 That might be the case. The “Processing Speed” in Signal Path should give you an idea.

If it’s much less than ~1.5x, then you’re asking for more than the CPU can do.

Yes, my experience is that the PlayPoint works great as a network endpoint and not nearly as great as a Roon server.

Hmmm. I had the MacBook Pro as the Roon core previously, and I think it sounds better with the core at the PP with native format. I didn’t play with the upsampling on the MacBook yet though, I will give it a go but I think I need to upgrade my 4GB of ram first, as it was already using 3.5 of it just running Roon core and internet surfing etc. I was also running the MacBook to the PP with WiFi. Did you find a difference sound quality wise with ethernet vs wifi? (I have only had the PP for a week now…and Roon, and Tidal! It’s all new to me!)

Did you find a difference sound quality wise with ethernet vs wifi?

I have everything connected via Ethernet in the room where the PlayPoint and e32 reside.

I’d urge you to go to 8GB RAM in the MBP and then experiment with upsampling in Roon. IMO, the e32 benefits noticeably.

So you never tried wifi vs. ethernet then?

So you never tried wifi vs. ethernet then?

Correct! The cables were already in place when I got the PP, so I’ve actually never attached its WiFi antenna. I’ve never had a problem with the Ethernet, but I’m about to move to a much more robust WiFi setup, so I may experiment once that’s in place.

My wireless is awesome; I have an optical line coming to the house, and the router has a 2.4Ghz and a 5Ghz network. I have not had one issue with the MacBook streaming to the PP wirelessly, I am just not sure if the sound could be improved by hardwiring it but I will connect one myself and see. I don’t know anything about the differences in cat cable; but I will do some research.

With core back on the MacBook I got the DSD256 working; seems stable so far…no cutouts; still wireless; headroom disabled. Fan is on the MacBook; she is warm but so far so good 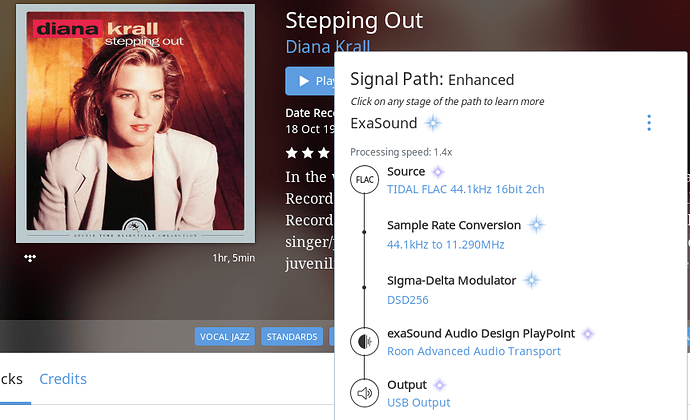 I have 12 GB of ram in the mail coming; how does the computer cpu look? This means I am using 32% of CPU, correct? is that good or not? 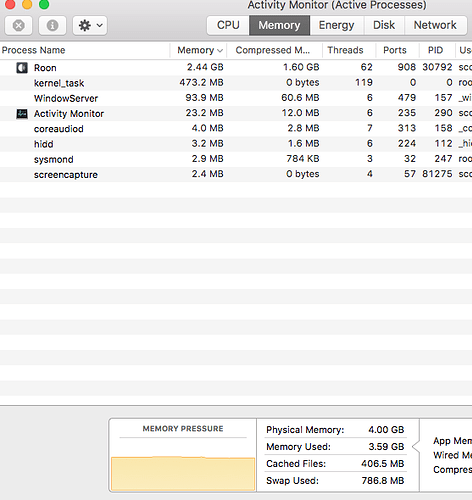 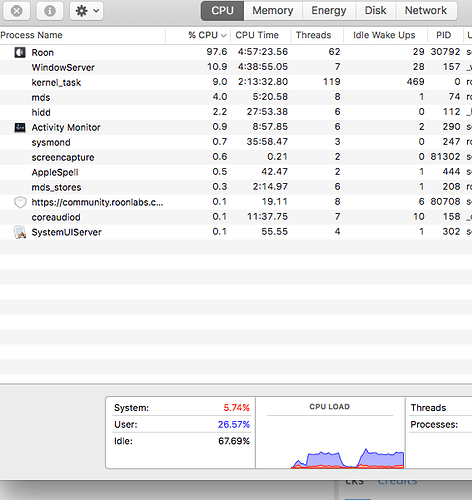 I have 12 GB of ram in the mail coming; how does the computer cpu look? This means I am using 32% of CPU, correct? is that good or not?

The 1.4x Processing Speed should be sustainable.

RAM helps to an extent with larger music libraries, but it won’t impact your DSP speed.

I have gone back to having core on the Playpoint. It didn’t sound as good using the MacBook as a core; stable DSD256 was irrelevant; it sounded more brittle, less smooth, more digital.

Just for my own edification … when you had the core running on the MBP, you were connecting to the PP via WiFi, correct?

Separately from the above, if the opportunity ever arises, you may want to try using a good-quality LPS with the e32 and/or the PP. This made a noticeable positive difference in my system (Uptone JS-2 powering both units).

Correct; did not connect ethernet. I have one piece I could use between the MacBook and the PP, but realized I did not have another to use from the modem to the MacBook for using Tidal. I could have played some files from the MacBook using JRiver, ethernet into the PP, but then why go into the PP? I might as well just do what I did before and go with my Wireworld USB directly into the DAC…

I did read in several posts that if it is bit perfect it shouldn’t matter if it is wireless or ethernet, but I could still compare.

I did compare hires files directly from a flash drive plugged into the PP vs. Tidal wireless streams and there was not an easily discernible difference here.

Yes, a JS2 is on my list. I have heard it may be better to go with HQ player before this though; your thoughts? I am still not exactly sure what the correct path is here for this: a computer with Roon core and HQ into the PP or with some other mini-computer before the PP.

I have heard it may be better to go with HQ player before this though; your thoughts? I am still not exactly sure what the correct path is here for this: a computer with Roon core and HQ into the PP or with some other mini-computer before the PP.

It’s definitely worth trying HQPlayer. It’s way cheaper than a JS-2, and at the very least, you stand to learn a lot about upsampling/filtering.

You may be a little constrained as to what you can do with HQP running on your MBP, since some of HQP’s filters are very resource intensive. Still, you’ll be able to see what it’s all about and decide whether it’s for you. Also, if you configure the PlayPoint as an endpoint, it’s a terrific tool for A/B-ing output from Roon vs output from HQP.

I used HQP right from the point when Roon/HQP integration was implemented up until Roon’s upsampling/filtering capabilities matured to the point where I decided that for me, the results I could get with HQP weren’t sufficiently distinguishable from what I could get from Roon by itself to make the extra effort and overhead involved in using HQP to be worthwhile. (This was around the time that Roon’s “native DSD processing” and CLANS modulators made their appearance.)

I’ve observed that one’s preferred HQP filter/modulator combos dictate how different HQP output will sound from Roon output. With the HQP poly-sinc filters that I liked, I found I could get SQ that was equally pleasing to me directly from Roon. However, others with different HQP preferences can’t get as close with Roon alone.

Thanks David. I will wait until I get my 12 GB of ram before trailing HQ, but if Roon options are close then why pay the close to $200 CDN?

So how robust of a computer do you have then: If you prefer to have the Roon core outside the PP it must be quite different to my i5 MBP. Could you explain your path to the PP?
I don’t really want to spend another $1K on a computer to run Roon and HQP for a potential 2% SQ difference.

I will wait until I get my 12 GB of ram before trailing HQ, but if Roon options are close then why pay the close to $200 CDN?

Like everything else in audio, it’s up to you to decide how much perceived incremental improvements are worth. In my case, once Roon’s capabilities improved to a certain point, it wasn’t worth it for me to continue with HQP, but I know that others disagree with this assessment.

So how robust of a computer do you have then: If you prefer to have the Roon core outside the PP it must be quite different to my i5 MBP. Could you explain your path to the PP?

Roon Core running on my i5-based mid-2011 Mac mini (8GB RAM) has been a constant since I started using Roon. When I first started using HQP and only “needed” to upsample to DSD128, I ran HQP on the same computer. However, when I acquired the exaSound gear and wanted to upsample to DSD256, the mini wasn’t up to the job and I started running HQP on my i7-based late-2015 Retina 5K iMac (40GB RAM). This provided ample resources to use whatever filter/modulator combo I wanted to try with HQP, given the maximum rates in question. So the path was…

(Splitting the tasks up across multiple computers is entirely feasible. Both Roon and HQP are happy with such an arrangement.)

So thanks to the Roon team’s development efforts, I was able to leave a ~$2,500 computer out of the mix and still get what I wanted in terms of SQ.

With Peter Lie’s encouragement I connected some ethernet between the MBP and modem, and the modem to the Playpoint network player, and turned off the wifi. It has definitely cleaned up the presentation of the MBP as the Roon Core to the point where it is much closer in sound quality to having core on the network player. I have gone back and forth several times and I am not sure which I prefer; it is close.

I also found in another thread while investigating the DSP filter options that utilizing the “parallelize delta sigma modulator” can reduce the load on the processor, so I engaged this and the processing speed has gone up from 1.4 to 2.4: 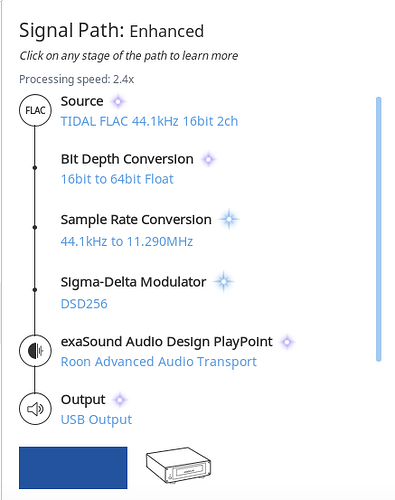