Back in the nineties I collected some hundred sampler-cd’s that came with Classic CD magazine each month. I ripped them into iTunes and spent hours finetuning the metadata. The cd’s are called “Classic CD 1” to “Classic CD 120”. Each album has its own folder with that name in the (roon watched) compilations folder in my music folder.

Now in Roon somehow they turn up as one album of 120 discs. I want them to appear as individual albums however (just like iTunes and Audirvana do correctly).
I discovered how to combine albums in roon (although I have not done that for this collection), but how can you do that the other way around?
I have tried
Renaming in iTunes
Rescanning the watched folders
Drag the ‘Classic cd - xx’ folders out of the watched folder, rescan, and put them back again.
Changed the disc number metadata in iTunes to make sure they are all disc 1 of 1.

I have searched Roon topics for a solution but I can’t get it right. Can someone point me in the right direction? Sorry if it has been discussed before.

If you exit one of the albums in roon you can prefer album metadata over roon. Play with that and see if it makes a difference?

Tried that several times: for individual albums, discs and complete library. No result…

Tadaa Solved
I made a backup of the files outside the roon watched folder, deleted de album from the roon library, cleared the library and made shure the files where actually deleted from the watched music folder, restarted the core and then re-added the backups into the Roon watched folder.

You forgot to throw salt over your shoulder and spin around

For reference, If you have a master folder say Classic Albums then each cd folder named just CD01 Roon will see it as a Box Set and group them

If you cd folders are CD01 - Some Album Name, Roon will consider them separate albums and split them accordingly

Mixed blessing depending on what you want

How Roon views folder structure is good to know…thx. Adding to this thread on how to organize boxes of discs and how Roon reads folders… Any best practices on how to name folders for Deluxe Albums with different disc types and layers? In most cases each disc is a metadata disk so layers tend to be extra tracks (i.e. 1-10 cd layer, 11-20 SACD layer or 1-10 stereo mix, 11-20 5.1 mix). I don’t want to use disc 1 and disc 2 because I want my folder name to indicate an SACD or CD. I also don’t want one picture tile for an album to include stereo and 5.1 tracks. I like the 5.1 tracks to be an album unto itself.

For Beatles WHITE Super Deluxe I have one album with 7 discs for stereo and one album w/5.1. My folder structure probably could be better, but I manually mapped the tracks to the metadata to get the result I wanted. Suggestions? 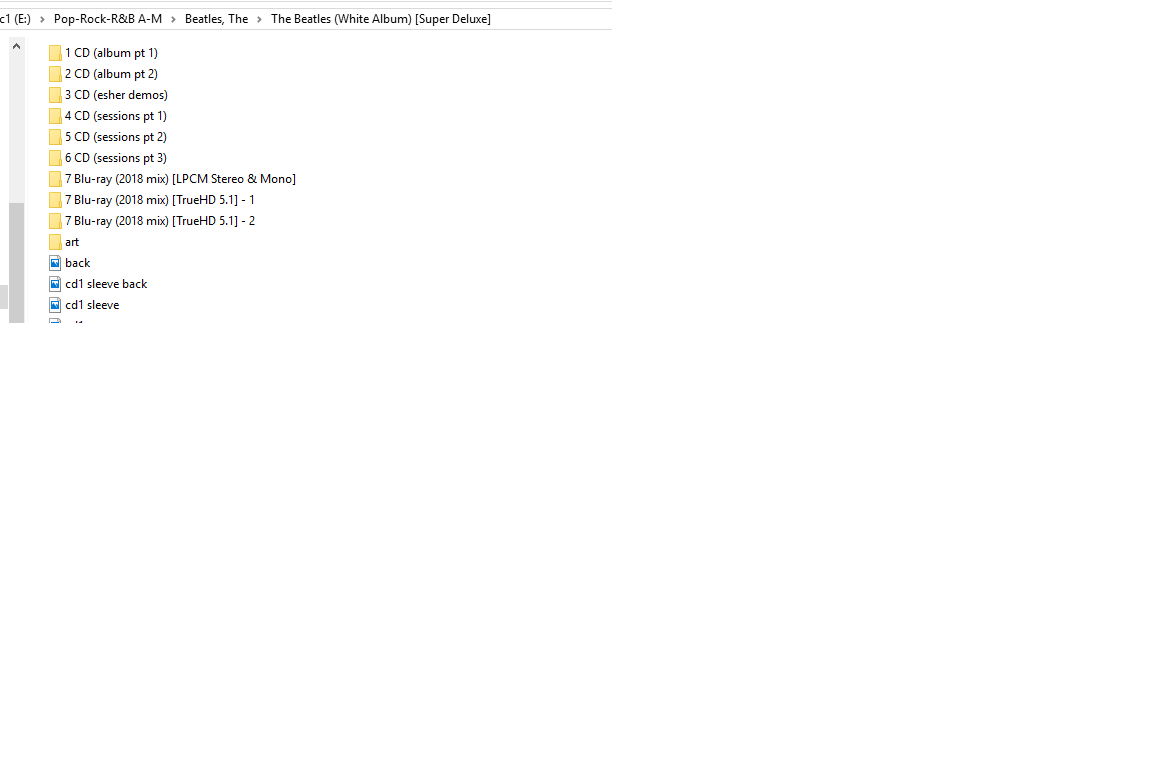