Split Tracks Out of Album?

Hi Guys - I can’t figure out how to do this. I imported a few vinyl rips and Roon has placed them into the same “album.” These tracks are from different albums and I need to split them out into separate albums. Here is a screenshot.

Any help is much appreciated. 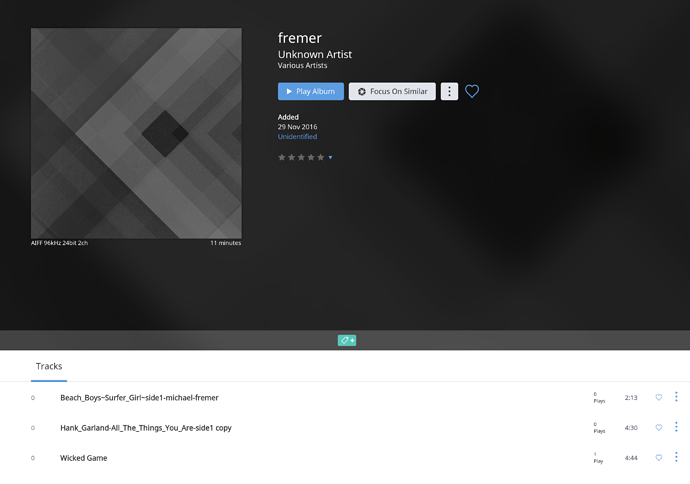 Hi Chris,
Have you tagged the files and put them into a folder structure that reflects how you want Roon to view them?

Hi Carl - No, I placed them into a single folder called Vinyl Rips. This folder has many other individual tracks in it. I haven’t touched the tags. I know if I manually enter the tags, Roon will make the needed changes, but I figured there was a way within Roon to split the tracks out of this album. Manually editing tags is so un-Roon :~)

Is it possible to accomplish what I want, or must I manually edit the tags?

Check out the “Move tracks to a new disc” section of this KB article.

By putting all of the unidentifiable tracks into one folder, you basically are misleading Roon. It has nothing to go on but the fact that all tracks are in the same folder, hence can only assume that they are part of the same album.

To give Roon some info actually to work with, you could edit the metadata of the tracks or move them into individual folders.

Alternatively, with a little bit of experimentation, you could split out separate track groupings within Roon:

I tried following the “Move Tracks into a New Disc” instructions from the kb article and had success.

I think it would add to the efficiency of file management (since whether it’s Roon, iTunes, Media Monkey the modern music lover is now essentially an IT manager of their collection) to be able to edit file information from within Roon.

The idea behind Roon is automation of data entry = ease of use. It seems counter to suppose if the automation doesn’t get it right, then the onerousness of manual fixes is just the way it is. Why can’t manual fixes be designed to give the user as much ease as possible, too? I have nearly 500 classical tracks that I want to fix. If the number of clicks, scrolls, and file searching I have to perform could be cut in half that would be awesome!