Another Sunday, another release. Just a solid maintenance release with stuff all over the place.

Personally I’m rather happy with the ‘check if the installation was successful’ feature, as this helps me in reducing support time

Having trouble SSH’ing into Ropiee release 2.595 even though it shows the SSH service enabled in the webUI. My client connects but the Pi won’t accept the traditional Ropieee login password anymore. Did something change with the SSH config?

Hi @spockfish, I see the following line when booting:

This is just before

Edit: glad to see that edits to config.txt survive updates.

Thanks for the new release. Any timeline on hardware volume settings for the XL modes? I use the hifiberry dac+ settings which are really pretty common and I’d love to see the hardware volume control work on that, even though I don’t use it much.

Hey Harry @spockfish, do you have a screenshot that you could send me to include in the guide?

Hi @spockfish, I see the following line when booting:

This in a linux thing. You can safely ignore it. /dev/random and /dev/urandom are the source of random numbers in Linux. Systems like RPis don’t have many good sources of entropy, so when the system boots, it takes a bit for the kernel to build up “enough” entropy to provide “cryptographically secure” random numbers. (Hence why RPis usually always run hrng/rngd to help feed entropy to the kernel from various userland ‘ticks’.) These warnings are common on RPis, and just means things asked for a random number while entropy buffer was low. And even with low entropy, the Linux random number generator is still pretty good. And RoPieee isn’t doing anything that would suffer from non-cryptoghraphically-secure random numbers.

There is a LOT written out on the Interwebz about this. Including proper propeller-heads doing cryptographic analysis of the kernel’s random number generation in academia…

Hi @spockfish - sorry I asked this in another thread but I forgot to tag you.

Do you have the list keys that I need to program in Flirc to take advantage of the extended control set you have implemented?

You can just ‘map’ keyboard settings on top of each other. So program your keys with the Media Key profile (which does not have ‘stop’ for example), then switch to another profile (media center for example) and program stop etc.

Version confusion.
In Roon -> Setting -> About, the version displayed for RoPieee is 1.7 build 571
It is “You have the latest version installed” complient, but …
…the version number format for the latest and greatest is 2.595

Why are there two version formats for one release?

My RoPieee device says it is 2.595 so i really have the latest version.

Why are there two version formats for one release?

Roon is reporting the version of Roon Bridge running on the RoPieee installation, not the RoPieee version itself.

2.595 seems to have made both my Ropieee’s disappear as far as the core and remotes are concerned.
They’re both connectable via a browser and both have the same IP address, both over wifi.
One’s a RPi4 and the other a 2. One has Digi + pro hat and the other a Dragonfly usb DAC. it was showing up until I foolishly upgraded it as well.

I’m no expert, but they can’t have the same IP address. Maybe, try unplugging both RPi’s from power and ethernet. Then, reconnect one of them and go into RoPieee and get it configured and working properly. Then, reconnect the second one and see if you can get it working.

no I mean they each have the same IP as before. but thanks for the quick reply.
As it happens multiple reboots and pulling power cables and both are back.
Just another hour and half not listening to music, trying to fix devices or get my android remotes to bloomin find the core (currently toggling, both wifi off and 4g, then rebooting the app is the flavour of the month)!
Honestly if it hadn’t all worked find for 5 months and lulled me into life time membership, I’d be long gone. I dread sitting down to play an album now. 9 times out of 10 I have to can it off and play network fixer.

Mine works 10 times out of 10. Wish I could tell you why. I don’t use Android if that makes any difference, IDK. 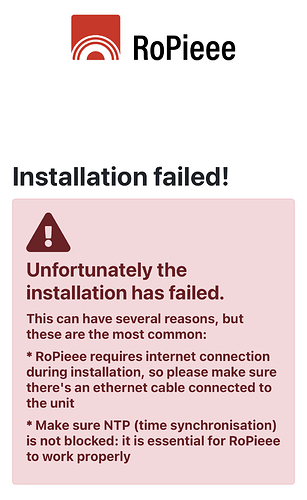 I got this after update. It won’t go away even after reboot. Good thing: I still can play music over Roon. Awkward…

I’d submit feedback so Harry can take a look. The feature is new, so there could be some edge cases to (re)consider, or it could be that something in your setup is actually failing?

Hmmm…how to submit? Can’t even log in to RoPiee @spockfish