Simple question here. At the moment, my watched folder is the parent folder of my NAS. I have 10 subfolders with music in them that Roon pulls from, but for quite a while, I only add new albums to one of the subfolders. As a result of using the parent folder as the watched folder, Roon has to work its way through millions of files each time – many unrelated to music at all – as it does a storage update. Since all but one of my music subfolders is “frozen,” is there a way to set Roon (without disturbing my current database) to look for future changes only in the one subfolder that changes as I add new albums? Thanks. JCR

You can, of course, move all your 10 music subfolders into a folder called “Music” and have that as your watched folder. That way, it will not have to wade through all the non-music subfolders.

Of course. Got it. Thanks. JCR

Well, @Rugby and @mitr, it’s not going well. After moving the subfolders into the Music subfolder and making that my only watched folder, I am back to about the same number of tracks: 368,814, with 56,459 albums. All fine there. However, for any track I play other than 16/44/1, on any of the 12 endpoints in my home, I get the error message that playback was interrupted because a track failed to load. It doesn’t matter if it’s two or multichannel.

It’s something to do with the interaction with the NAS, I believe. TIDAL and Live Radio do play out.

I did nothing except move the subfolders and changed the watched folder. Let no good deed go unpunished!

Additional clues. I have HQP in the server, which I use to play vinyl through my Lynx AES16e soundcard at 32/192 and HQP resamples to DSD128 for my Pro-Ject PreBox S2 Digital DAC with Audiolense convolution filters running. No stuttering, so the server is working fine. Also, the server has JRiver MC26 on it and the multichannel files play out with convolution through JRiver with no stuttering.

So this is a Roon issue, for sure.

Anything you can suggest? I’m at a loss. Kal, you can likely really understand my frustration, as the Okto dac9pro arrived today (after a five month wait!). I have it installed and configured and can’t listen to it at all. Ugh. JCR

Yipe. It is probably a Roon issue and I hate to think that I/we may have caused it. I had no idea that you had additional endpoints and, frankly, do not know how they might have been affected by the file relocation. Can you move them back and restore the prior library back-up?

I have no remote endpoints, they have never been an issue when I did such manipulations in Jriver or in Roon. Since I am at a loss to help I should just apologize and shut up.

No worries,@mitr. No, it would be a nightmare to undo the moves, as I had non-music in the other folders and kept them, so I’m not completely sure what moved from where.

Here is the plan. I’ve rebooted, yet again, and will do a backup of my Roon database. Then, I’ll uninstall RoonServer on my server, reinstall and input the backup. I hope that will work, not only to solve this new issue but also as to remembering the endpoint setups. I don’t want to have to figure those out all over again. (Actually, I think I will take a snapshot of each before uninstalling.)

My very short listen with the new Okto through JRiver tells me that I am going to have the channel mapping issues all over again. Sigh. And the output, particularly bass, seems hotter than my former Musical Fidelity X 4 with udio-8 multichannel stack. (That’s going up for sale on Audiogon and elsewhere.) Do you set the volume on the Okto to 0 dB? I’m using the ASIO driver. I think I’m going to need to remeasure for Audiolense convolution filters with this Okto DAC. JCR

Update: complete new install done and database is completely reloaded with about the same number of tracks and albums and …same problem. Tracks fail to load on every endpoint I try.

@support, I am now stumped and need help here, presumably looking at the logs. I saved the old RAAT and Roon subfolders as .old in the hope it can show something. Thanks. JCR

Have you disabled/removed the old folders from the storage watch list ?

If you look at an album that doesn’t play, can you look at the file info from the 3 dots menu?
What file path are you seeing ? 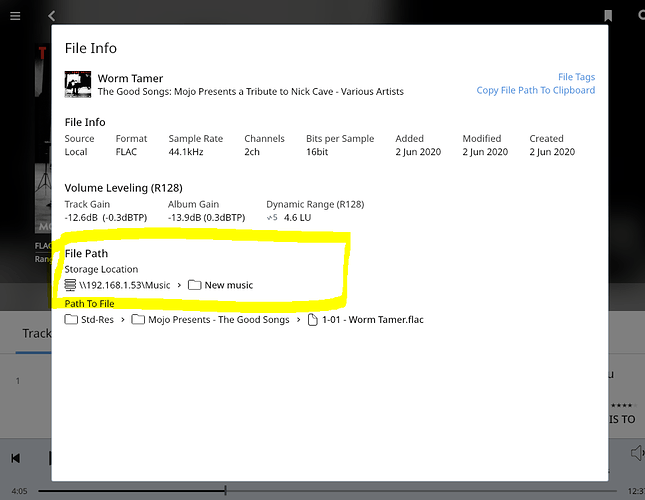 It may be that you have moved things in a way that is incomplete from a Roon p.o.v and albums are logged in the old and now empty folder…hence no playback.

Here is the plan.

Good luck. I hope it works.

My very short listen with the new Okto through JRiver tells me that I am going to have the channel mapping issues all over again. Sigh.

Yup. With the 7.1 output of the ASIO driver, I have to move the SL/SR output cables to outputs 7,8 of the DAC8. If you tell JRiver that the output format is 5.1, however, you do not. However, I keep it at 7.1 for compatibility with Linux-based Roon sources where there is no option.(I just saw that I might be able to finesse this with the Roon option to swap surround and rear outputs. You might try that.)

Thanks for the suggestion. Not the case. I pretty much know what music moved and as to multichannel tracks, nothing moved. Yes, I did remove the old folders so that just the one I want watched is watched.

The tracks that I’m testing never moved, all played before and now aren’t playing at all.

The only thing left I can think of to do is to try to restore my Roon database from a backup two nights ago, before I moved the 40,000 some odd tracks of my 350,000 total. Sure, it will mean that Roon will have to search and index all those moved tracks again, but maybe I can get things working.

Any other ideas, crew? JCR

No, it would be a nightmare to undo the moves, as I had non-music in the other folders and kept them, so I’m not completely sure what moved from where.

How exactly did you move the files? Did you have the Core on at the time and was watching Roon perform transfer?

If Roon was watching both storage locations, it is possible that the moved files might have accidentally gotten picked up as “new”.
The proper procedure to move files would be to disable the storage location under Roon Settings -> Storage, exit out of Roon, move the files, start Roon, point Roon to the new files, see: Preserve Edits Guide

Here’s what I would do:

Well, @noris, you are correct that I didn’t do it quite the right way. At least, I did backup first. After the backup, and while Roon was running, I merely dragged the 40K tracks from the other subfolders into my Music subfolder, which was one of the subfolders of the parent folder being watched. I then removed the parent folder and set the Music subfolder anew as the only watched folder. That apparently had the effect of requiring an entire re-scan of my Music folder. I thought the scanning was done when Storage stated it was watching for new files in real time, rather than showing it was scanning. Well, I was wrong. By carefully watching the tracks imported, I could see that every ten seconds or so, another 10 tracks would show up as imported. This took several days.

While everything now shows up as recently added, at least my recently played and history remained intact. A properties search in Windows 10 of my Music folder says I have 345,985 files, but only 209,476 show in Roon as ultimately imported. I am not sure what happened to everything else, or even how to determine what is and isn’t missing – although at least so far, anything I’ve gone to listen to seems to be there. If you have any thoughts, I’d like to know.

What does this mean? Well, I can once again play out through any of my endpoints, including in MCH through my new Okto dac8 pro DAC while running convolution filters (but, only with WASAPI for DSD over DoP and not native MCH DSD with the ASIO driver).

To the last point in my parenthetical above, I do have one remaining issue with the new DAC. I think I know the answer, but would appreciate confirmation. The new DAC will do up to DSD128 natively if I use the Okto-supplied ASIO driver. It works for two-channel, but can’t start to play at all with MCH. I assume that with convolution filters, Roon has to first downsample the DSD stream to a high bitrate PCM to apply the filters and then use the Delta Sigma Modulator to upconvert back to the native DSD format for playback through the DAC? There’s enough juice in my i7 processor and 16 Gb of RAM to do that for two-channel, but for MCH, I’m seeing the processing rate at 0.2-0.4X, which I assume is the issue. May I correctly conclude that when I do my next server upgrade to an i9 or i10 processor that I’ll likely have the horsepower to run MCH for DSD files natively, with convolution?

I’m tagging @mitr here so Kal knows I’m back in business. Kal, the Okto – even with WASAPI – sounds great in MCH, and I have the channel mapping sorted for the Okto as well.

Also, @Carl, you should know as well that things have resolved themselves.

Glad to hear you got the issue sorted out!

for MCH, I’m seeing the processing rate at 0.2-0.4X, which I assume is the issue

Yes, you’ll definitely want to have a processing rate of above a 1x to ensure stable playback. Perhaps someone who has tested an i9/i10 with this can chime in or you can also ask in the #roon section.