I do not know if there is already a thread like this, but independent of soundtrack, I wondered if people would want to share or discuss movies and series they stream and enjoy.

Let me start off: “The Tourist” on HBO Max. A strange series that is initially surrounding the amnesia of our main character.

(Full disclosure: This is an Australian movie, and I have a great deal of difficulty with accents. For example that stereo fellow named Hans; I often have no idea what he is saying. I dream of that day when everyone sounds like me, but that’s another topic.)

The Tourist is available in the UK on BBC iPlayer. Funnily enough it’s next on my list of things to watch.

I’ve just finished Chloe. Available now in the UK on BBC iPlayer and later this year in US on Amazon Prime, as discussed in this article.

It’s slow paced, but in a good way. I really enjoyed it.

Apologies to other parts of the world for my lack of global info.

“Euphoria” tests limits but certainly does not represent the best of humanity.

I often have no idea what he is saying

Subtitles are a solution.

Tales from the loop - Amazon Prime

Loosely based on the amazing artwork of Simon Stalenhag
www.simonstalenhag.se

This is seriously subtle science fiction. Beautifully filmed and edited, with a very slow momentum.
Touches on many important subjects, such as life, death, family, love, etc.
I’m now watching for the third time, as it’s my current obsession - Also a beautiful soundtrack by Philip Glass.
Still in limbo if a second series will ever materialise…i hope so! 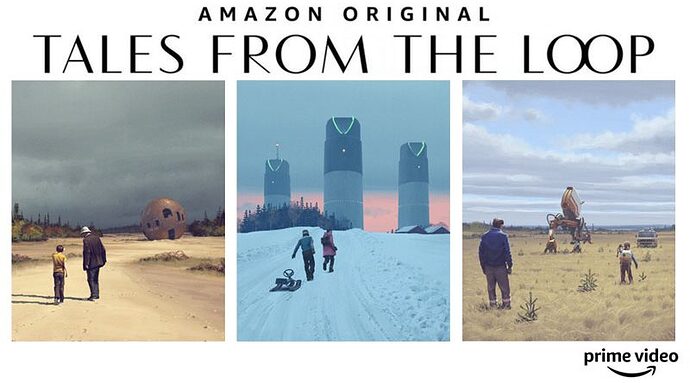 We have been watching
In Treatment
Pieces of Her

Quite different from each other.

One of the best movies I have ever seen besides the Godfather Trilogy.

We are enjoying Mosquito Coast.

‘Nightmare Alley’ on HBOMax or the original on The Criterion Channel or better yet read the outstanding book.

‘The Last Duel’ on HBOMax, for the blood match alone.

the original on The Criterion Channel

I prefer this one.

Saw it as a child when they still had Sunday afternoon movies on TV.

The ending bothered me for days.

The Criterion Channel also has the 1978 “Death on the Nile”. Sumptuous photography, Olivia Hussey, and a very Agatha Christie plot. Hard to imagine Branagh can top that, though of course he does get to reuse the plot.

Bruce Willis’ receptive and expressive aphasia is a sad ending to a productive career in TV and movies. While wholly different from Robin Williams and Glen Campbell, often all we have is our cognitive abilities. I recall someone cognitively testing Glenn Campbell, and his responses to the questions posed. Confabulation is an interesting and painful thing to observe. It is the creation of false memories but not done with the intentions of deception . Individuals who confabulate have no recognition that the information being relayed to others is fabricated. At least there is some peace in that lack of self-recognition.

Watch “Die Hard” or “Pulp Fiction” or the charming “Nobody’s Fool”, and feel better. We should all have such a lasting memorial to what once was. I think his last good movie was “Moonrise Kingdom” (2012).

His dementia impacts only his life and the life of his family, same with Tony Bennett, but dementia can be malignant in how it impacts larger environments. We often see dementia as volitional and we become blameful of the individual. But directors were correct in removing him from situations that depended upon his being intact. In either case, I know many saw it coming but politely avoided the implications. Die Hard as a Christmas Classic was such a “fun” time.

The Criterion Channel also has the 1978 “Death on the Nile”. Sumptuous photography, Olivia Hussey, and a very Agatha Christie plot. Hard to imagine Branagh can top that

In spite of having Gal Godot, I couldn’t watch Branagh’s version. The characters were too vaguely drawn and the plot was simplified, supposedly because the 1978 version was considered too convoluted. The dumbing of America continues.

though of course he does get to reuse the plot.

Criterion Channel also has the Japanese classic “Tampopo”. Pretty funny. A trucker who fancies himself a cowboy stops for noodles at a ramen shop run by a recent widow. But she doesn’t know how to cook, her husband did that. What’s more, the local penny-ante gangster is leaning on her for protection money. The trucker decides to fix all that. There are various other pieces interlaced – the best IMO is the scene where wives of executives are being taught how to eat spaghetti, in case their husbands are sent abroad.

I saw that in the theaters all those years ago. Anyone here collect Criterion Discs, besides myself?