I tried Roon with a trial account, which recently expired because I got worse sound quality with Roon than without. The reason I post this here is because I was alerted by kevin P I could be having an issue that can be solved.

I have the computer connected to a usb 3.0 peripheral switch, which in turn terminates in the USB hub of my Dell U2515H monitor’s USB hub. That hub is in turn connected to a Logitec wired mouse, and a Logitec Unifying receiver for a second wireless mouse, a Shure MV5 microphone and most importantly an Audioengine D1 DAC.

The DAC is connected through RCA to my active Audioengine A5+ speakers or my Audioquest Nightowl Carbon cans (the DAC switches the RCA’s off when it has headphones connected to it’s 3,5mm jack on the front). I use plain cables that came with the DAC / switch.

I have a Synology DS216j NAS which has a copy of my iTunes library on it. This library also lives on the pc’s NVME SSD and the internal NVME SSD of my 2016 15" macbook pro with Touchbar. I have iTunes match, but that only syncs ACC files. It’s fine when the original is a lesser format, but worse if the original is a better quality lossless. My library has mostly lossy MP3’s / AAC files from days of yore… Recently i bought music off Apple in ACC format but ripped the few CD’s we own in Apple Lossless… Having to maintain 3 copies of basically the same library is not ideal, i’m looking for a consolidated approach that works well and allows me to have my highest quality files available in the house, but also ACC versions on my phone / in the car (which is what iTunes match does very well).

I have a Tidal HiFi subscription but that often does not have the specific versions of tracks I really enjoy. Ideally I would be able to use both in conjunction, which Roon can do in the house but not on the go as far as I know?

The reason I use the peripheral switch is because I often switch between mac and PC, and switch the DAC / MV5 between the 2 computers for desktop-convenience.

I don’t have any issue playing back either through iTunes + Bitperfect on the mac or without on the PC (but with exclusive mode), or through the native Tidal apps in exclusive or default output on both machines. The DAC supports up to 24b/96kHz through USB and 24b/192kHz through optical (not in use, because I can’t switch that between my PC (which has a optical out) and my mac (which hasn’t).

The PC, the Mac and NAS are connected through wired gigabit connections.

If I played lossless files through Roon, the playback used to become choppy… Both normal CD quality and Masters files do that… I haven’t been able to fix this playing with bigger playback delays, upsampling (max and times 2) settings…

I used Roon remote on 2 iDevices, the mac and used the full blown Roon install on the pc to play music.

Is this a known issue?
Any suggestions what could be the problem in my setup?

I also use my pc and mac mainly for work that also requires output of sound through a local output that support headphones 80% of the time. I do mostly casual / background listening but do appreciate good soundquality. I don’t own a listening room and don’t intend to set one up. The appeal for Roon is more the library aspect that integrates lower quality local files + higher quality Tidal versions + the remote function for Tidal playback. The prospect of not having to run either a pc or mac to playback songs when I am reading in the same room but am not at the pc / mac, and being able to control it from my phone or iPad for example was interesting… But then I would need Roon + a Nuc + a dedicated network player… Quite the investment from where I am now.

Since I didn’t get it working after 2 weeks I initially intended to buy something like either an Aurelic Aries Mini instead and use the DS Lightning app for the same amount of money as Roon lifetime, or get me a better local DAC + headphone amp…

Thanks for your perspective…

Update: snatched up a Audioquest DragonFly Red with Audioquest forest 3,5mm - 3,5mm cable to see if I can get better soundquality out of that one + the mac on the speakers and remove the peripheral switch from the system (headphones will be more convenient with the D1 I presume…)

Hi @Indigolight ---- Thank you for the report and sharing this observation you have made with us. The feedback is greatly appreciated!

Moving forward, to help aide in our evaluation of this behavior you are experiencing, may I very kindly ask you for the following information:

I’ve been testing a bit.

I’ve re-installed Roon on the pc, with the only difference being that I’ve no longer indexed my local storage, but only the identical copy on my NAS as a source. That works equally well (fast) as before, and should allow me to migrate to a NUC based setup in the future easier… I also have less file-version clutter this way. I didn’t really cross test the file location before.

On sound quality: The issue seems to be there still when streaming from the NAS and Tidal. On the D1, it seems to happen most notably with files on 88.2kHz / 24bit format. This is the signal path: 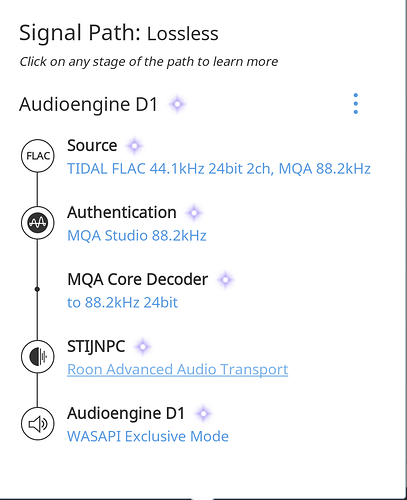 Note this is still with the USB hub in the monitor, and the peripheral switch connected to the system and the monitor. I lack a USB A+B connection cable long enough to do a straight connection tot the pc at this point to try that…

When I connect the Dragonfly Red to my mac, and stream the same song from the NAS or Tidal through it, connected to the same active speakers, on the secondary 3,5mm input on the speakers I get a really clean sound. The path looks like this then: 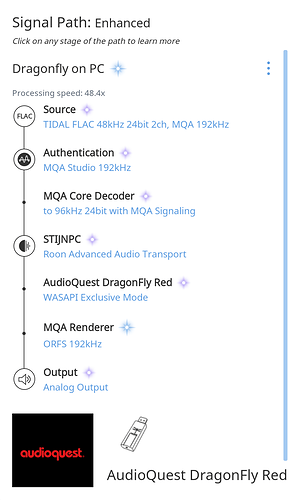 There is no audible noise on pause or “under” the music when it plays. It does sound better than anything I heard from the D1. There is more separation, tighter and deeper bass and overall a “cleaner” sort of sound… The D1 sounds muddy compared to the AudioQuest on the mac. I haven’t connected the D1 straight to the mac, I could likely try that…

When I connect the Dragonfly to the monitor, through the hub + peripheral switch on the monitor, I get a sound that does not skip, but does have some kind of hiss “under” it that is clearly audible and thus annoying, I did no critical listening for anything else, as the noise is already unacceptable…

I suspect that is a USB noise issue then? This does seem to predict that the hub + switch degrade the signal to the D1 and thus the quality… Funny it does not happen in the Tidal desktop app and does on Roon. I’d like to understand why.

I could try to get either an long optical cable for a cleaner signal from the PC (which also enables 192kHz playback instead of 96kHz through USB), but leaves me with likely unclean power from the USB bus. Or, I could get me a better USB cable and connect that straight to the PC, bypassing the hub and switch but still being limited to 96kHz… I suspect a high-grade USB cable will likely be more useful for transplantation to a better DAC in the future as well…

Right now I use the mac + Dragonfly to stream to the speakers, and still the D1 for use with headphones on background music / Youtube / etc… Basically everything not Roon.

Ok, did some more elaborate testing to troubleshoot the issue.

It seems this is not a Roon issue at all (sorry!), but something inherent in the D1 DAC, or at least my sample…

I’ve torn down my desk setup and tested the D1 straight out of an USB port on the motherboard of the PC (DSP to max PCM rate (power of 2x), and got the skipping / cutting out. So, it couldn’t have been the hub + switch alone, since they are out of the loop now: 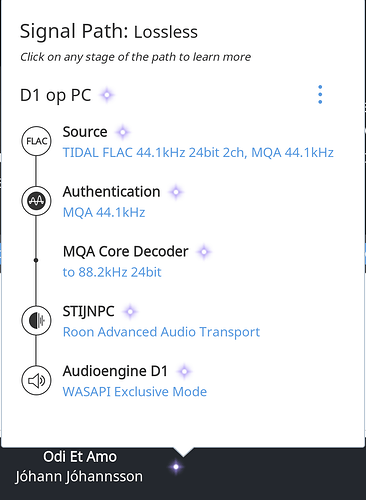 I’ve then tried the same song again, with the same DSP settings on the Dragonfly Red, on my Macbook Pro. Flawless sound: 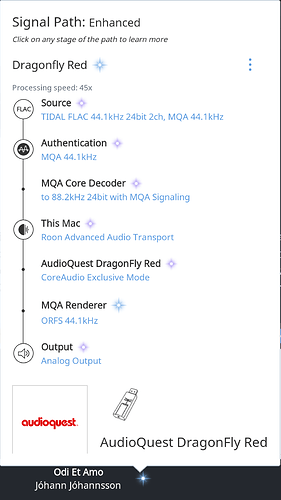 Then I’ve hooked up the D1straight to the mac without anything in between, max PCM (power of X2) DSP setting again: skipping! 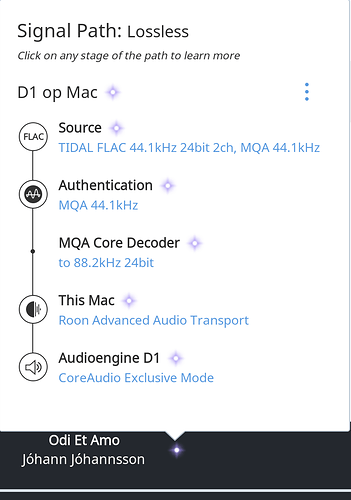 For reference an extra test with the D1 on the Mac, the Tidal app, exclusive mode:

Hi @Indigolight ---- Thank you for the followups, my apologies for the wait.

The additional feedback from your testing has been very appreciated and it certainly seems like you have narrowed this behavior down to the D1. Excellent work! Just to be complete, if memory serves me correct the D1 does not require any drivers, correct? If I am confused about the unit and it does require drivers for Windows, I would recommend trying to reinstall them to see if that triggers a change in behavior with the device.

Hi Eric, you are correct, the D1 does not require drivers, on pc and on mac and the problem happens on both platforms. I’m in contact with Audioengine support to pin the issue down…

I am looking for a dac / preamp / headphone amp upgrade in the meantime. While I like the SQ of the Dragonfly a lot (with an audible difference in the MQA enabled files), it is not a convenient product for a desktop solution… The D1 doesn’t sound as nice, but is far more convenient with it’s RCA out’s and switching 3,5mm jack + analog volume control, and it is also not recognised by Roon as the Dragonfly Red is. I would like something that combines the SQ of the Dragonfly (or better), with it’s better Roon integration, but also with multiple inputs and, a better headphone amp, and preferably also MQA support… The hunt is on…

Final verdict: The D1 is defective…