Various including PC, two dacs etc, 6 outputs in all

I am noting in the left channel distortion if I enable DSP in particular parametric EQ. even if I make no changes. This is through a variety of hifi’s and systems. Not sure what else to tell you other than it tends to be with Tidal, though I think thats because some of the tracks I am listening too are a bit ‘wall of sound’ such as Lambchop’s first track on The Bible. As soon as his voice comes in distortion on the left channel until I turn off DSP

It sounds like you are clipping here, do you see any red indicator of this at all?
Can you post your DSP settings that are causing this?

Hi where would I see a red clip? Thing is I can enable it and do nothing else and it still distorts.

Yes I understand that’s why I wanted to see the actual DSP settings to see just what it’s doing when you enable the DSP.
See screenshot of DSP settings, this one specifically for headroom management.
You can see where you would need to enable the clipping indicator that would then show red in the signal chain 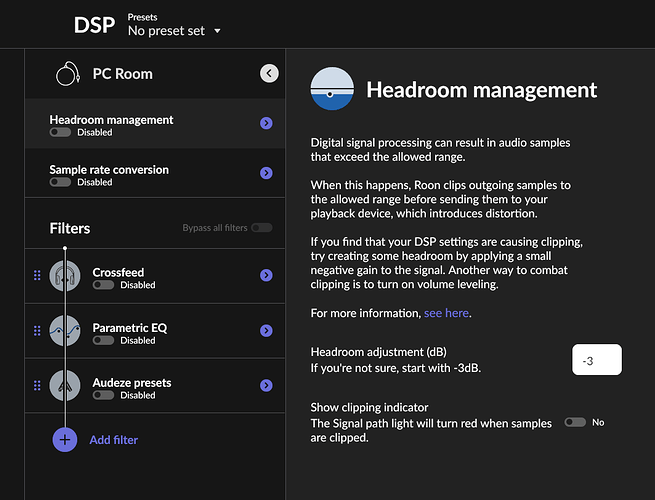 But that would indicate (if that’s the case) that some other setting in your DSP is causing this. But that is also what the headroom is for, you could try enabling and setting a lower db figure where it states.

Ok I will turn that on, but remove the volume adjust ment and see what it does. (This was not on)

Yes plenty of clipping! I wonder why that would be though if I have not adjusted the curves? Well anyway I have reduced the baseline to -3DB (I just want a bit of bass boost)

Lets see what that does.

Thats interesting but it seems Roon knows this can happen which is why they provided this tool.
Be interesting to see if anything else is on when you enable DSP?
Do you see anything else in the DSP settings panel?
Or as you say it can just be those tracks are already near the knuckle and you may have to go further than -3db even…

Yeah to be fair the tracks are not great recordings, Lambchop seem to have totally lost the plot which is a shame, I am also listening to War on Drugs and most of their recordings are poor frankly.

This is practically direct line, from a streamer directly into Meridian M2s, with the other consideration that I had to turn on DSP? Volume control.

@Gareth_Irwin, welcome to the plethora of cool sound manipulations.
I’d really recommend you take a peek around Roon’s knowledge-base regarding their DSP-engine’s how and what to get you started.
It’s just far too complex for a “beginner” in functionality to expect forum q&a to quickly get you where you’re imagining to go…
You may well come back with still unanswered questions and we’re certainly happy to guide you along - just better to cover the basics over there, first…

Thank you, slightly condescending I have been using roon for over 4 years, never come across this issue before.

It warrants further investigation, certainly reducing output on the EQ helps, but the distortion on the left channel kicks in the second DSP goes on and its doing it on plenty of tracks, including good recordings.

I would be worried its my speakers but it does it on three separate systems.

Should have checked your stats, but certainly wasn’t meant as you perceive.
Sounded much like a DSP-beginners question though, so, sorry again!

You could show us screen shots of what’s enabled to be able to tell what’s going on.
If nothing enabled, no clipping!

That said, it seems you’ve probably some filters set-up with positive gain - a sure ticket to clipping, since you must compensate with i.e. negative headroom to avoid.
Or you might have sample rate conversion turned on, which could cause so-called inter sample overs, effectively being clipping also.

EDIT:
posting this, although you marked thread solved…

I didnt mark the thread, perhaps the mod did? I have in general a very simple set up. In this instance I just wanted a bit of bass boost. I have just purchased some old Meridian M2s and really they are not meant for the near field listening I am doing. so at lower volume not much bass. ON that basis all I did was open DSP settings turn on EQ and pushed the bass a bit (not much)

Later a realised there was distortion so reduced the bass to flat line, distortion was still there so turned DSP off.

That’s what I have done. I have settled on -5db.

Its just not something I have come across before, but I am wondering if these speakers are a bit more senstive to it, hence why I am hearing it now.

If the clipping indicator is coming on then it’s nothing to do with speaker sensitivity your clipping samples in the digital realm before it gets there, doesn’t take much to make anything clip given how badly compressed most recordings these days can be.