I have a Holo May and Serene, basically a Spring 3, and I need a computer to get to Jussi’s recommended settings. My old i7-4770 and GTX770 on windows don’t quite get there

What’s the most cost effective/best value to get to DSD512, v2 modulators and more intense filters? I’d be okay with a dedicated machine, as long as the energy consumption was quite low at idle when not in use to run HQ Player. Ideally I could run Roon, HQ Player and do my light work when not listening, all on windows, but I understand that comes with some downsides. Any feedback/help is appreciated!

Out of curiosity, How much load is on your gpu?

This is where I’m wondering how much cuda (meaning the number of cores) is really needed and what the ratio is of cuda core to performance is… I have a titan x with 3072 cuda cores but it’s at the min compute capability for hqplayer which is v5.2. The TitanX is what I’m using now for DSD256x48 playback and convolution and it usually has very little load on it except for 1 or 2 filters, the xla w/asdm7ecv2 being one combo which I know loves drawing a lot of gpu power.

I have a RTX3080Ti FTW3 with 10240 cuda cores that has a Compute capability of 8.6. This is in my gaming rig now but I could throw hqplayer in it and compare it to the titan x, But I’m quite sure the 3080ti wouldn’t really break a sweet with 3x+ cuda cores available.

So… the 3080 is in a league of its own for cuda compute cores but titan x, gtx1080 and rtx2080 are all close with the only difference being the compute capability level and price.

If the compute capability version doesn’t matter, which I still don’t know, and 2500 cuda cores is sufficient, which I also don’t know, to do the more demanding filters @ DSD512 rates, the question is would the older more affordable Titan X with more cores perform better than the newer rtx2080 that has fewer cores? That is assuming that could do the DSD512 rates.

If hqplayer only needs a 5.2 compute capability level, I’m curious how the titan x, gtx1080 and rtx2080 would compare. I don’t have anything to send DSD512 and I don’t have the other 2 cards for comparison.

If hqplayer only needs a 5.2 compute capability level, I’m curious how the titan x, gtx1080 and rtx2080 would compare.

I don’t benchmark these much. But I’d say my RTX 3060 laptop GPU is at least as capable as my GTX 1080 desktop card, or more. Apart from amount of GPU RAM which is big factor in some cases (large convolution filters and sinc-L filters).

But otherwise number of CUDA cores is sensible figure only for comparing relative performance of GPUs of same generation. But even then, also things like RAM bus width (memory bandwidth) matters.

Hi jussi.
This is interesting… one being mobile and one desktop… as mobile stuff is usually held back by design being focused on power consumption. The RTX3060, even though it is mobile, it is making up performance being 2 generations newer and ~1000 more cores, but the 1080 is still respectfully holding it’s own, I’m assuming due to the fact that it is desktop form factor.

With what you mentioned above, can either produce a DSD512 stream using… I don’t know… let’s say poly-sinc gauss long and or poly-sinc hires lp w/AMSDM7EC 512+fs or non EC?

I realize cpu hasn’t been brought up in any of this and that also plays a large role in the outcome. Since hqplayer only utilizes 6 cores at most, if I was building a box right now specifically for hqplayer and maybe even throw roon core on it, how far off am I thinking the fastest corei5 K in 11th or 12th gen is a good place to go with cpu?

It seems having more cores in the i9 or i7 wouldn’t really help hqplayer unless other processes were also being used on the machine running hqplayer.

How, or do the efficiency cores in the 12th gen intel effect hqplayer?

With what you mentioned above, can either produce a DSD512 stream using… I don’t know… let’s say poly-sinc gauss long and or poly-sinc hires lp w/AMSDM7EC 512+fs or non EC?

Modulator depends on the CPU. And filter depend on the filter in question and available GPU power.

Since hqplayer only utilizes 6 cores at most

This is not the case, even for stereo, HQPlayer can utilize pretty much as many cores as there are available.

If you want to do 8 channel multichannel, good starting point would be 16 performance cores plus 16 efficiency cores.

or do the efficiency cores in the 12th gen intel effect hqplayer?

HQPlayer can decide if it is good to use efficiency cores as well, depending on how many performance cores there are available and what kind of processing there is to be done. In other cases efficiency cores can be left for running for example Roon on the same machine.

What’s the most cost effective/best value to get to DSD512, v2 modulators and more intense filters

Hi @Rush. I just thought I’d share with you my findings.

The AMSDM7 512+fs works quite well though.

I also tried with a i9 10900k and rtx 3080ti ftw3 on a Z490 motherboard with similar results. So it seems the processor is the weakest link in both of my situations.

It’s looking like jussi’s 12th gen intel i9 12900 recommendation is where you should probably look to get the 7EC, 7ECv2 and AMSDM7EC 512+fs modulator to work.

Thanks to all who replied, it’s all been helpful. It sounds like money is better spent on the CPU for modulator performance than the vastly more expensive GPU.

How does this sound, if anyone is still listening:

It seems like it might be worth waiting for the next gen from Intel and Nvidia. I have no idea what I’m talking about, but what I’ve read leads me to believe a bit bigger gains generationally than they have produced recently. It might give time for the DDR5 market to calm too.

Run windows because I’m not adaptable

Keep it simple and you’ll be happy.

So much for simple. Lol

I use the Microsoft’s Remote Desktop app on the iPad that I use for a roon remote to access the host machine if I need to change hqplayer settings.

I also tried with a i9 10900k and rtx 3080ti ftw3 on a Z490 motherboard with similar results. So it seems the processor is the weakest link in both of my situations.

You should be able to get DSD512 with EC modulators using this. Have you tried setting Multicore DSP to “checked” instead of “grayed”.

You should be able to get DSD512 with EC modulators using this. Have you tried setting Multicore DSP to “checked” instead of “grayed”.

Unlike everything else I have, I haven’t tampered with bios and settings on this machine, …yet

Pretty much is setup as Load optimized defaults, select xmp profile 1 for ram and changed the fan curves. 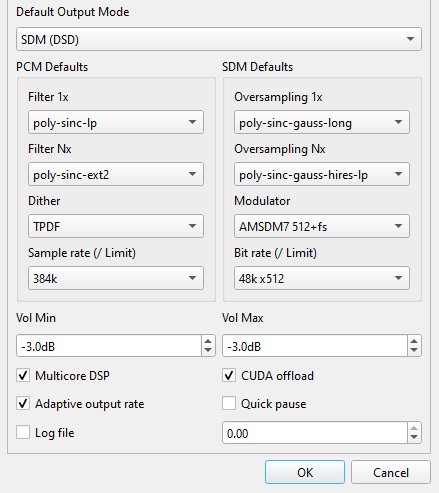 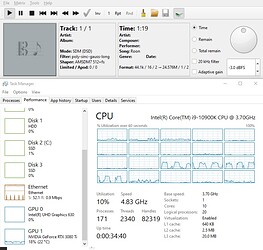 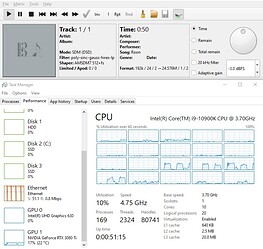 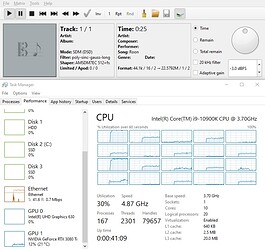 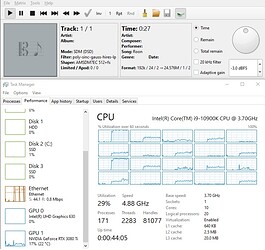 Stock BIOS settings. No need to touch anything there, 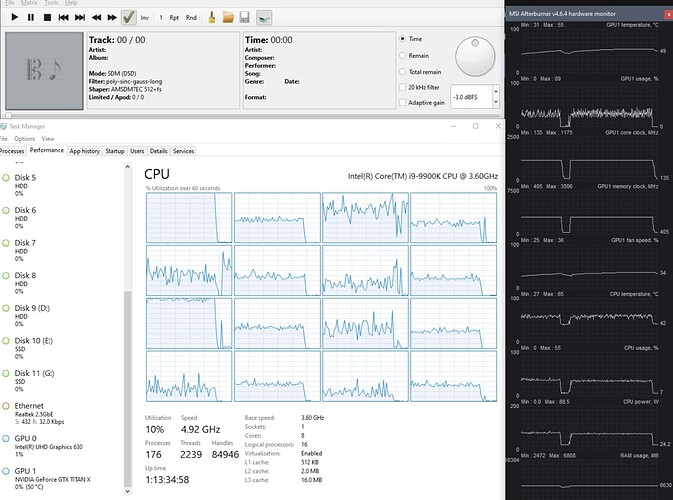 Ya something is wrong.

Instead of ticking multicore, can you set it to grey? Like the default.

And turn off CUDA offload.

Just for giggles put Embedded amd build on a USB stick and you will see your machine will do it. Unless there’s something in BIOS settings holding you back

I don’t use Desktop much so I can’t test to see differences unfortunately. Not with my 9900K and 11900K machines anyway. They both run amd build on headless Embedded

And it doesn’t work? Can you try with ASDM7ECv2?

But 10900K certainly shouldn’t have trouble with it.

Can you try with ASDM7ECv2? 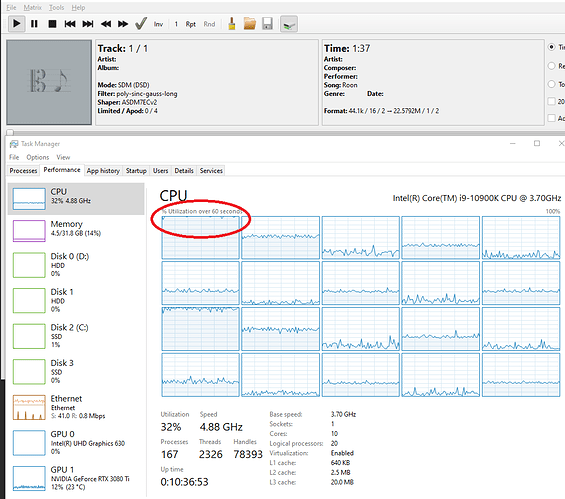 asdm7ecv21048×926 67.5 KB
Tried using only hqplayer as the source. same result. could there be something with optimization that could improve core usage? 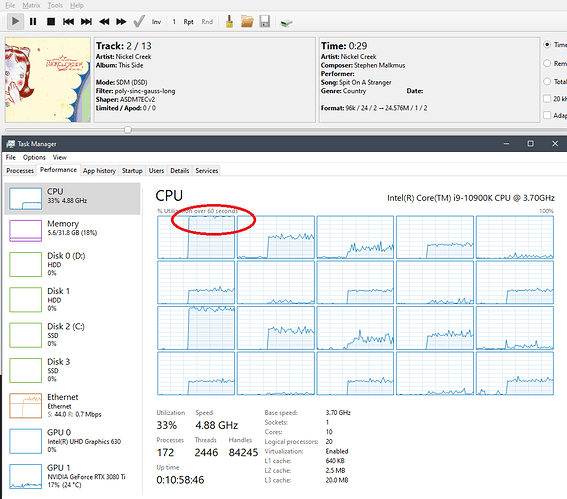 Tried embedded on the 10900K. It did gauss-hires-lp w/amsdm7ec 512+fs There were dropouts, but a lot less. It did not like the sinc filters at all, but lack of CUDA could be the reason.

At some I may throw Ubuntu on a ssd and see if hqplayer desktop on Ubuntu w/CUDA will play nicer than windows.