Switched to RoonBridge and now the DAC doesn't show

Was running RoonServer on my i3 NUC connected to my Musical Fidelity V90 DAC, with no problems. Using Asus Zenbook laptop to control.

Brought my desktop from work to home office. Copied RoonServer and RAATServer folders from NUC to desktop at user/myname/appdata/local. Deleted Applications folder from RoonServer folder. Installed RoonServer on Desktop. With the NUC shut down, library appeared as it used to, with my favorites and internet stations all there, and I could play through the various devices attached to my desktop (system out, video card HDMI driver, mobo sound driver), and would list the devices as attached to my “Core.”

Uninstalled RoonServer from NUC, and made sure RoonServer and RAATServer folders were deleted from appdata/local. Then I installed RoonBridge on the NUC. With the NUC turned on, with no DAC attached, my settings could see the NUC as attached to the network (even listed the IP address), but the settings would show the desktop’s devices as connected to the NUC, and the settings would not show the “Core.” It’s as if it simply replaced the NUC for the Core and assumed that the Core’s devices were now part of the NUC. Roon would try to play through the devices, but it would fail and try the next track, and the next track, etc. If I pressed pause, it would, on its own, try to play the next track. I’d have to terminate RoonServer on the desktop to get it to stop.

I attached the DAC to the NUC, but settings would not show it. Only the desktop devices would be shown as available zones to enable, again as if they were connected to the NUC. Rebooted everything, and still got the same problem.

It’s not the DAC/NUC connection, because the DAC outputs the Windows shutdown “music” to the stereo when I shut down the NUC.

All machines running Windows 10. NUC is headless, but not especially configured as such (simply no monitor connected). All machines on wifi. Enabling a desktop device as a zone while it is listed as a NUC-connected device gets Roon stuck on trying to enable it (but fails to do so). Music stored on Synology DAC and RoonServer on desktop has no problem monitoring.

Am I misunderstanding the purpose of RoonBridge? Why does the “Core” machine disappear from the list of available zones to enable, but its devices (sound card, video card) remain available to enable but as if connected to the NUC? Have I totally lost my settings/playlists or are they recoverable after this problem is solved?

Please help. I have no music now, and it’s a big bummer, especially right before the weekend. Thanks.

The absence of replies seems to signify your problem has stumped most of us here, perhaps @mike @vova can help.

As SJB says, somewhat stumped by those symptoms, never heard of it happening before. Could you post some screenshots demonstrating what you are describing ? Might provide a clue about what’s going wrong.

The backup you took of your RoonServer folder should preserve your database and settings/playlist so that you can regain them once this connection issue is resolved.

0 for 2 on my Roon support requests so far. I never did get a response to my shuffle problem, and my guess is that some software engineer would have to poke around in my three computers to get at the heart of this problem. That, or someone is going to tell me to do a clean install of Windows 10 on all three PCs… Here’s hoping someone at Roon can recognize what went wrong with my installs.

At least you haven’t told me that I’m trying to use RoonBridge wrong. My idea was to have a minimal software footprint on my NUC, for the sake of sound quality. But if RoonBridge is so buggy, perhaps I should switch to a regular Roon install on the NUC.

Thanks for taking a look at my problem, John.

Some screenshots as @andybob says would be helpful, sometimes graphics show up issues that are difficult to articulate.

I know how frustrating these issues can be but I find this community and the devs do try their utmost. 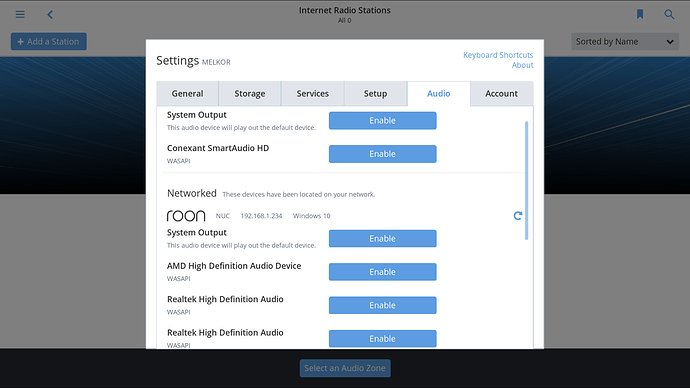 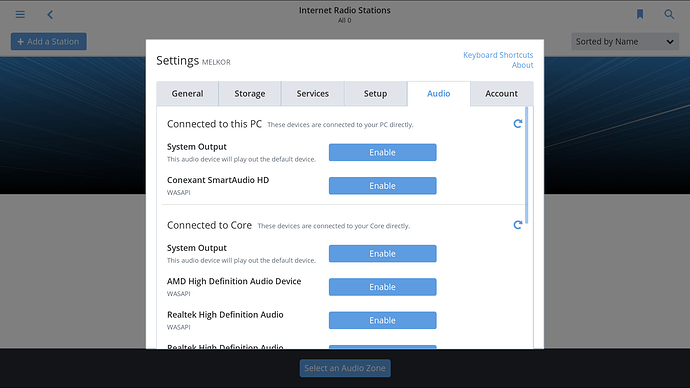 Thanks again. Sorry about my pessimism.

can you give a screenshot of the lower sections of audio devices from both pictures?
Which picture is the one with the NUC (roonbridge) off? 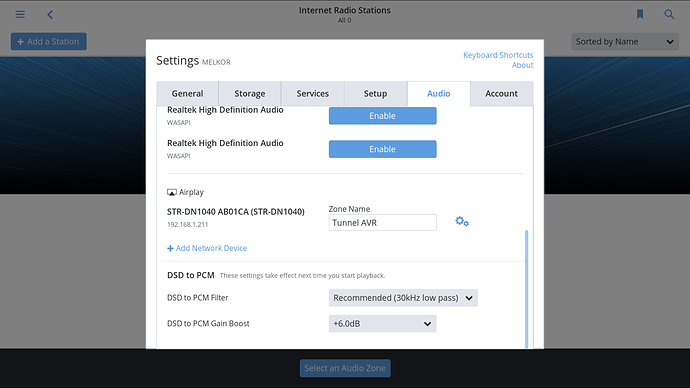 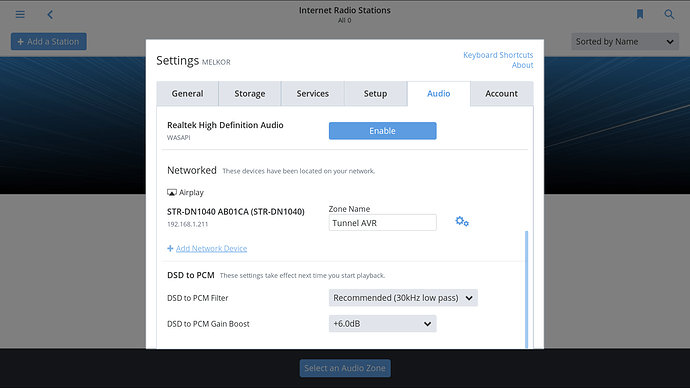 Here’s the bottom halves of the settings. In case this is what you’re wondering: the Core does not show up as a location of available zone devices, separate from the NUC, when the NUC is on. When the NUC is off, the Core is listed as pictured but the NUC is not listed. The only difference between the two states is that the NUC replaces the Core as the location of the devices listed under the Core. But the NUC doesn’t have those devices. Before I installed RoonBridge, the only device listed for the NUC was the DAC attached to it via USB.

John, your description of the current install is correct. The picture with the NUC off is the one that mentions the Core.

Andy, Roon on the desktop is RoonServer, so there is no GUI, so there is no way to tell what it sees. Roon Remote on the laptop sees the Core (and associated devices) when the NUC is off, but the Core is removed from the list when the NUC is on. Excepting, however, that when the NUC is on the Core devices are listed as shown in the screenshots, but as connected to the NUC and with no mention of the Core. The NUC doesn’t have an AMD High Definition Audio Device or 3 Realtek High Definition Audio zones, but the desktop Core does. The NUC only has the V90 DAC.

Same library for either configuration: Melkor, the name of my desktop; i.e., the RoonServer watching my music folder on a Synology NAS.

Whew! I hope this helps. Thank you again for your time and efforts.

Let’s drop some flags for @mike and @vova. Not sure what’s happening here.

In case this is useful to y’all, I just uninstalled RoonBridge from NUC. Ran CCleaner to clean the drive and performed the CCleaner registry fixer thingy (I did this every time I uninstalled Roon from any of the machines). Then I made sure all Roon folders were deleted (they were), and I downloaded and installed Roon (not server, not bridge, not the phone apps). The V90 DAC appeared as it used to, and I’m listening to Clem Snide right now through the NUC/DAC.

I guess it was something about RoonBridge. I’ll wait until RoonBridge matures some before I install it again. Is it in a public beta right now?

If it would help you guys to have me re-install RoonBridge or do other diagnostics, please just ask. I’d be happy to contribute to the maturation of the software.

I’m glad you have music again.

I’ve no idea what was happening ( then why would I?) with your disappearing core issue, I was expecting to see the NUC and core had the same audio outputs, which clearly they haven’t.

I have one Clem Snide in my collection, must give it a spin sometime today.