Synology Set Up for Roon

How do you control where the Roon Shared folder resides on a Synology? I seem to only have the option for “Volume 1” and cannot direct it to the SSD which I have installed for the purpose of running Roon. I have an HDD in ports one and two and the SSD in port three of the Synology

If you have inserted a SSD internally, make sure it is set up as a volume. You can do this in the storage manager (“Volume”-side-tab).

Click on “Create” and select the inserted SSD to proceed. (The data on the SSD will be erased in this process). 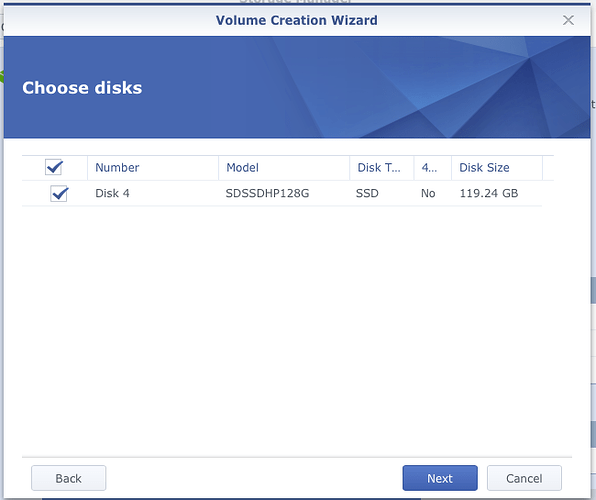 When this is done (or if you have done this already), the SSD should be selectable when creating a new shared folder. 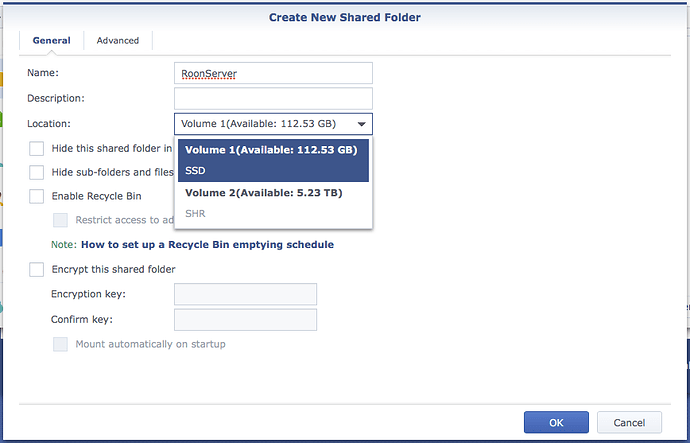 create_shared_folder.png868×558 44 KB
The “SSD” description under the “Volume 1” entry has been entered as a description during volume creation process. It can be anything else, that you would like to name the volume.

You can also use this volume now to install apps to this drive: 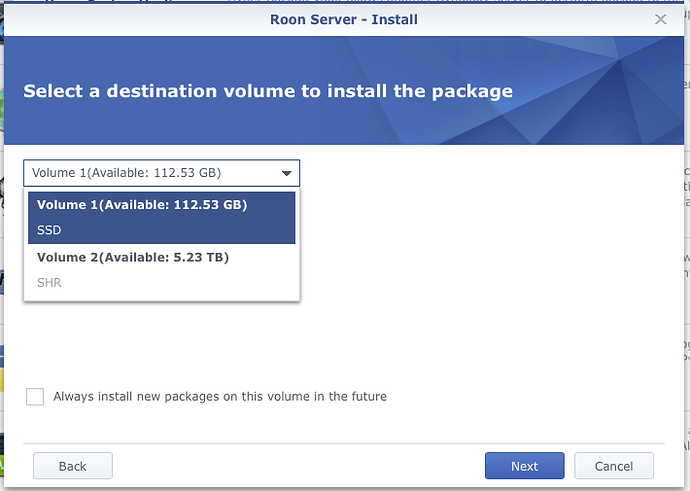 Thanks Christopher…next up downloading and installing your spk package!

Downloaded all ok to it’s own SSD volume…where do I enter the path discussed in “Adding your Music to Roon”?

When your roonserver is running on your synology, it can be configured with a remote device (computer/smartphones/tablet) that has the roon software/app installed. When you start it, select to connect to a RoonServer. Afterwards you can enter in the settings (storage tab) the music location. Make sure not to mix up watched and organised folder when adding your music locations.

What if your SSD is an external usbshare? How do you direct the install to it?

I would recommend to use a ext4 filesystem, as it is the standard Linux filesystem and probably has the best implementation in terms of access speed.

I was unaware that you could run seperate ssd volumes via the internal drive bays without impacting the usable space for the HDD RAID. Is that type of configuration possible?

For example, in a DS1515+, run a four-HDD RAID volume and then a totally independent SSD volume for certain speed-dependent packages.

Blowing my mind over here.

Newest problem…the Roon remote App won’t download to my iPad (with latest 9.3.4 update)! Getting the message “This app is not compatible with this device” Surely it must be???

Depends on your iPads day and age. Basically, it comes down to 64-bit / OpenGL3 support: iPad Air & Air 2, Pro and all mini’s from version 2 upwards.

See this knowledge base article for more info.

According to Wikipedia it has a 32-Bit CPU.

Oh no! that means to get Roon, I have had to spend money on a newer NAS, a SSD and a new iPad Air as well as changing my Server to a Roon ready model and then the Roon subscription itself…it’s a very expensive project then.

You can keep your NAS if the overall performance is fine for you. This depends on the size of your library. The SSD is recommended just for the Roon database. A drive with 64 GB should be sufficient and does not cost a lot anymore. If you have no internal tray left, you can also use a USB3 cabled SSD (if your Synology model has USB3 ports) The SSD is not a requirement but highly recommended as it will speed things up a lot.

The Synology and QNAP packages were meant for people who already have a capable NAS that can run the RoonServer software. I would not recommend buying a new one just for Roon. In that case it will be cheaper and faster to get a small NUC with an i5 cpu and use this as a dedicated RoonServer machine. Your music files can still be stored on your current NAS.

The Synology and QNAP packages were meant for people who already have a capable NAS that can run the RoonServer software. I would not recommend buying a new one just for Roon. In that case it will be cheaper and faster to get a small NUC with an i5 cpu and use this as a dedicated RoonServer machine. Your music files can still be stored on your current NAS.

I just switched back to using a 2011 Mac Mini for my Roon Core, but was recently using my Synology DS1515+. While it’s nice to minimize the number of boxes running in your home—especially if you’re in a small apartment, condo, or office—there’s also a certain logic to having specialized and separate components for each Roon stage.

In my case, I’m using the Synology to store and serve my files (at least until SSD storage pricing comes way down and 3TB of solid state storage is affordable) and will build a fanless HTPC when my Mac Mini starts to fail. HiFiBerry units and a Windows gaming workstation will act as endpoints.

I too would stick with the core on a macmini or nuc type install, I built an i5 6500 silent PC to do this and it runs jriver concurrently too.

My NAS (synology 1813+) while perhaps will work is not ideal for such an intensive app and I found when testing on my 713+ that performance was terrible. QNAP NAS’s can be found with much better cpu options however and if you need a new or first time NAS then that might suit some people better.

Personally a small silent PC/Macmini is going to better, as I prefer to keep my NAS away from my listening areas due to having multiple spinning hdd’s making constant noise.

Personally a small silent PC/Macmini is going to better, as I prefer to keep my NAS away from my listening areas due to having multiple spinning hdd’s making constant noise.

Fortunately, if I find the performance to be acceptable, NAS noise shouldn’t be an issue. I keep my Synology in a networking rack and endpoints (including a Mac Mini) in the listening areas.