Right off the bat, I’ve isolated the issue to my user as a newly minted user on the MacBook Pro doesn’t have this issue. I need help understanding what file(s)/folder(s) need adjusted in my user folder to correct this.

Full detail:
I’ve used (and will continue to use) a Mac mini as my Roon Core. This Mac mini has also been my primary desktop but I’ve recently gotten a new MacBook Pro and used migration assistant to copy my data from the Mac mini. After trashing the Roon, RoonServer and RAATServer folders from ~/Library, removing Roon and RoonServer from /Applications, restarting and then downloading and re-installing just Roon, I cannot use the System Output on the MacBook Pro. The “This Mac” section in the Audio preferences of Roon shows the outputs for the Mac mini that are not present on this MacBook Pro and there is no Roon Core section showing these outputs like there should be. It seems there’s something (presumably about coreaudio) that gets touched by Roon and came over as a part of the migration. I’d like help understanding what file(s) that would be and how I can essentially clear the cache for Roon so that it differentiates the MacBook Pro audio outputs and the Mac mini core outputs as separate items like it should. If I create a new user on the MacBook Pro and open Roon, the outputs are correctly differentiated and I can use the System Output on the MacBook Pro normally. Please let me know if I can provide additional details and/or logs to help get this sorted. Thanks!

Did you use roon inbuilt backup and restore to move roon or apple tools. I suspect the latter which may well explain your findings.

FAQ: How do I move my Roon library to a new computer?

Roon tracks every file in your library, and any actions you take in Roon are attached to that file, whether you're editing it, adding it to a playlist, marking it as a favorite, or tracking how many times you've played it. Starting with Roon 1.1 ...

I performed a migration assistant copy of all data from the Mac mini to the MBP just to move my data in general but the intent is that the Mac mini remains my core as it’s always been and the MBP is now just a client. Unfortunately I can’t use the speakers or audio out on the MBP since it still has the Mac mini’s outputs registered in the “This Mac” section of the Audio preferences in Roon.

Would you mind sending me the suggestions that you referred to in this thread? I’m having the exact same issue with what seems like the exact same scenario (Mac mini with data copied to new MBP via Migration Assistant). I appreciate any help that can be provided!

Would you mind sending me the suggestions that @noris referred to in this thread? I’m having the exact same issue with what seems like the exact same scenario (Mac mini with data copied to new MBP via Migration Assistant). I appreciate any help that can be provided!

I’ve manually removed and reinstalled Roon on the MBP

Did you just remove the app or did you also remove the Roon(server) and RAATServer folders in ~/Library? (You can go there by pulling down to ‘Go’ menu in Finder and then press the option key – the Library menu item will magically appear in the menu).

These folders will be freshly remade when you launch Roon on the MacBook after removing them – creating a fresh machine id in the process. The MacBook’s system output should be available after that.

On the MacBook Pro, I’ve removed the Roon, RoonServer and RAATServer directories in ~/Library every time I’ve attempted a re-install with reboots in between most reinstalls.

Since the original post, I’ve also uninstalled Roon Server on the Mac mini by performing a manual backup in Roon, stopping the service, deleting the app, deleting the same directories in ~/Library, rebooting, downloading a fresh copy of Roon Server and installing it and then restoring the manual backup to the Mac mini. In doing that, the only change that’s come into play is the System Output and MacBook Pro Speakers entry in the screenshot below. Before reinstalling Roon Server on the Mac mini, the upper four audio endpoints were the only thing that were showing.

There’s also a GIF attached below showing that both of the System Outputs that are listed in the This Mac section are the same output. They don’t output to the MacBook Pro when enabled though. The MacBook Pro Speakers do output to the MBP speakers but that doesn’t resolve my issue trying to use other output on the MBP as I should be able to with the System Output as I primarily use headphones with my MBP.

Thanks for any help you can provide! 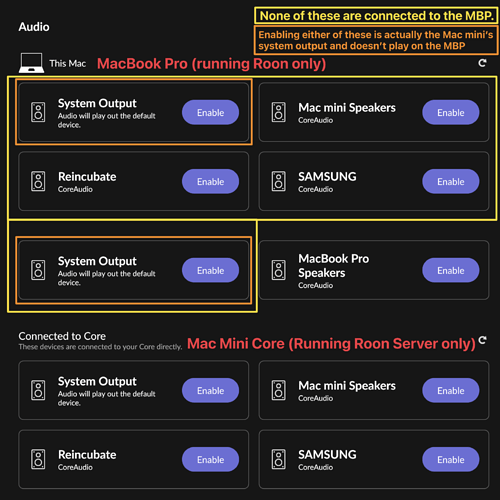 I’ve been able to get this working and I think the fix was something interacting with and updating Core Audio. I setup Steam’s Remote Play on the MBP which installed a virtual audio interface on the MBP and now my outputs are all correct with This Mac only having the MBP outputs and the Connected to Core having the outputs from the previous screenshot. I’m still very curious what specifically could be manually done but at this point I’m all set. Thank you everyone!