Congratulations on 1.20 - it is great to see this progress.
It made me browse through some different views and I found that 1 Giant Leap shows up with one Album when there are two. So I did a search on the missing album name and found it as seen below: 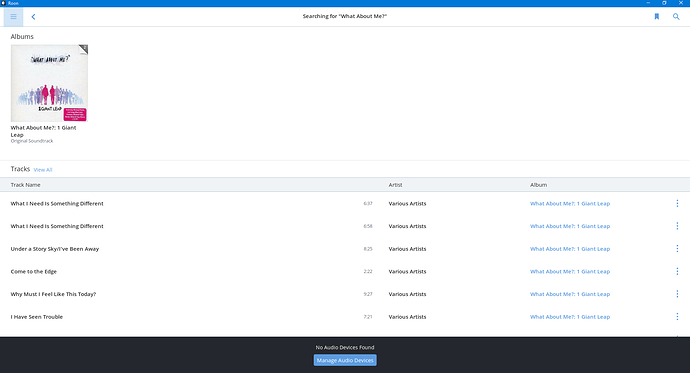 @mike We had worked on previous genre and metadata issues. I have not received a response on this from a week ago. Do you have any suggestions? Should I delete Roon and start over fresh? Is there any way that I can export the Roon metadata associated with the tracks. That would allow me to do a systematic comparison with my tag data rather than stumbling along.
I do not feel confident that I have achieved a complete and consistent integration of my tag data into Roon but I have no way of verifying the metadata that Roon associates with my library versus what I have groomed in my library. Right now we stumble from case to case with no overall view of the problem. Thank you.

@mike the problem persists with build 128.

@mike I understand that support has many issues on its plate after 1.2, but two weeks seems a long time of inaction. Yesterday I also posted about an issue with artists. I seem to be the only person affected by conflicts between Roon and file metadata so I can understand your priorities are elsewhere.
If I give up on Roon does the application stop working or does the application stop updating metadata - since that is the part that has an on-going cost? Roon is a good player but I do not see any way to live with your metadata. I see no indication that you will ever truly fix it so that file data can be used consistently since others do not have a problem with the mangled combination of file and Roon data.

I’ll take a stab at this. When Roon attempts to Identify an album, it will use tags from your files, among other things, and will try and match it up to an album in their system. It’s based on Rovi (I believe) which is where Allmusic gets their metadata. So, that album can be found here:

What About Me?: 1 Giant Leap - Original Soundtrack | Songs, Reviews, Credits |...

Find album reviews, stream songs, credits and award information for What About Me?: 1 Giant Leap - Original Soundtrack on AllMusic - 2009

You can see that it matches what you see in Roon. So, this is a metadata problem and should probably be reported to Roon so they can get it fixed.

Even though you want Roon to use your metadata, which it will, it still gets identified (if it can find it). This album doesn’t seem to be attributed to 1 Giant Leap. Rovi probably needs to fix this. I don’t know this album, but it does look like a Soundtrack with Various Artists, but is it 1 Giant Leap music?

Anyway, could you post a screenshot of the album? You did a search, but didn’t select it. Btw, Original Soundtrack is an Album Version, not a Genre. If you display the album, we can see if it’s using a Lounge, like you want.

Currently, you can edit an album and change the name of the artist, for example, but it won’t currently move it under 1 Giant Leap artist. That may come in the future, I don’t know. You can also edit out Original Soundtrack too, if you want.

So, in summary, it’s a metadata for the album that needs to be corrected. Although Roon will still use your tags for Genre.

Hello Greg, and thank you for pitching in in the absence of Roonies.
So the problem is the old one of Roon not using my file tags?
I had encountered this problem before. I had originally thought that it was all straight forward from the Settings options, then I learned that the best way is to take all my music and physically set it to use my file tags for Genre, Album, Artist, Album Artist etc. I did that, but it does not seem to have worked as this is Roon metadata rather than the file metadata - and this is an old album pre-Roon.
It is my dream that one day Roon will create simple settings that work every time to allow me to choose Roon or file metadata for selected field for all my library. So far they have tried and I have tried but it is not working consistently and completely.
For now I can but go through the same tedium again.
@mike I know that you are out there, but so are these problems…
Cheers.

Greg
You refer to Album Version rather than Genre.
Here is the Album display AFTER setting it (again) to us file data for the Album. 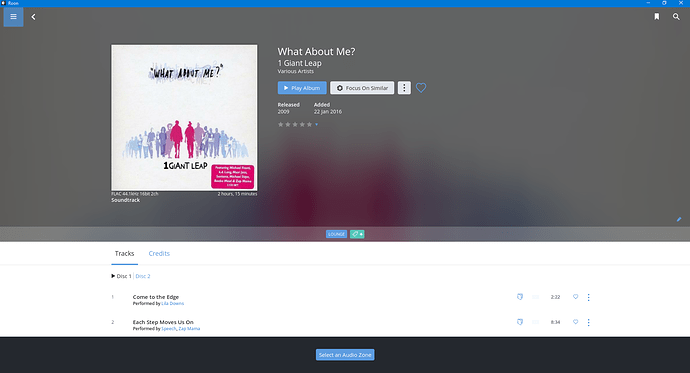 Pasted image1920×1040 297 KB
I looked at the Edit Fields selections and I found Album Type set to Soundtrack while Genres is set to Lounge. I also see the small Lounge label below the cover.
Do you know of a way to turn off Album Type?
Peter
Greg (Greg Stratton) April 29, 2016, 10:46pm #8

As far as I can tell, Roon is working as expected.

You have to remember that Roon uses a number of methods, including your file tags, to Identify the album and add it to your library. It will do this regardless of wether or not you are using Roon metadata, your metadata, or a combination of both. It needs to be identified in order for you to get the most out of Roon, such as reviews, album and song picks, ratings, etc. Some of these things are not necessarily in your tags. There is currently no review for this album, but since it’s Identified, if one is ever added, it will show up on this album.

So, in the case of the album above, Roon did identify it properly and add it to your library. It’s just that Rovi, one of the suppliers of their metadata, has it wrong. It’s not a mistake of the software, there’s a mistake in the metadata. The software is properly using the genre “Lounge” in the album, just like you intended.

In the future, editing of the metadata may be more robust, but we’ll have to wait a bit and see what they come up with.

What do we do for now?

It can take quite a while for metadata changes to come through, so we have to be patient.

Hope that helps. Hopefully @mike can take a look and see if he has anything to add or correct.

Thank you, Greg.
I have edited the Album and Album Artist to the way I think of it.
You are correct that the project was both recorded and videoed for a TV show. However, it was done by the I Giant Leap duo, collaborating with other artists under their direction. In my own classification scheme, I associate a single consistent soundtrack with the artist genre that created it - 1 Giant Leap and Lounge in this case. In other cases where a soundtrack is a collection of diverse works (Almost Famous, for example) I classify them as Collection alongside the old Hear Music collections or any other curated playlist. I do not use Soundtrack as a Genre. With over 5,000 recordings, I use only 27 Genres in a way that is meaningful and manageable to me.
I read somewhere that Roon 1.3 will try to address metadata management in a more consistent way. I am holding my breath because I seem to be one of the minority to whom their own curated metadata is more relevant than Roon metadata. To me, the value of Roon is as a player with an attractive interface. If I could simply buy the player, populated by my metadata - I would pay double to have less. For now it is a struggle.
Enjoy your weekend. Peter

Hey @PNCD – sorry to have kept you waiting here. I was hoping to find a few minutes to explain some of the subtleties here, and it’s taken longer than I expected.

A few other points to make:

I’ll also just say, @PNCD your feedback was extremely helpful as we designed genre editing for 1.1. The way you’re trying to use Roon is pretty different from how the product was originally designed and, while we don’t plan to make Roon into a tag editor, you’re not wrong when you say that some of your needs are poorly served by the current feature set. We’re working on it, and I hope you’ll continue to be patient as we address the issues you’re raising.